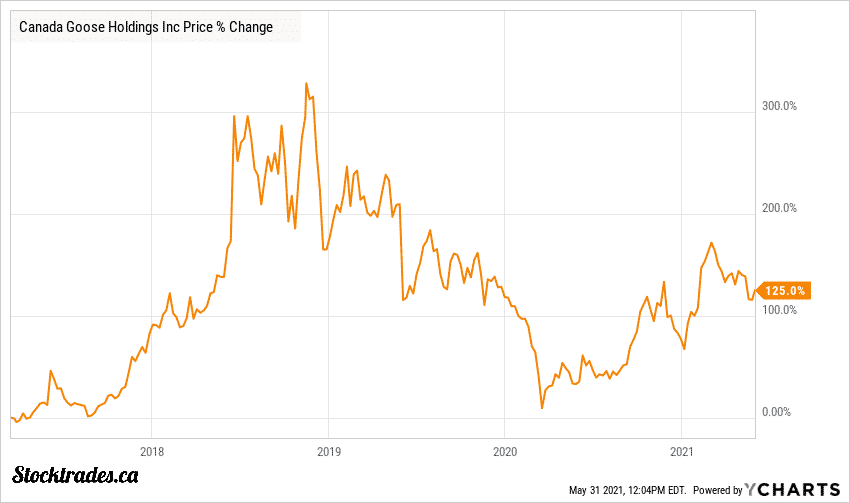 In the investment world, following the crowd rarely makes you money. So, while the vast majority of investors dump their Canadian growth stocks and head towards safer value and “real economy” plays, the growth sector is now providing more value to Canadians, and a contrarian play right now could end up making you some money down the line.

But, what are the best opportunities?

Well, we’ve definitely got most of them over at Stocktrades Premium. In fact, we’ve more than doubled the TSX Index over the last 3 years highlighting excellent top Canadian stocks to members.

I’m also going to go over a couple in this article today, ones that provide strong value for those with a long investment horizon.

Strong earnings with this Canadian retail play may not be enough

It would be tough to find a stock in the retail sector that was hit as hard as Canada Goose (TSE:GOOS) due to the COVID-19 pandemic.

Why? The company drives a significant amount of growth from its Asia segment, particularly China. So when the pandemic first hit and retail sales were decimated in the country, so was Canada Goose. So much so that this high growth company, one that had consistently posted double digit top and bottom line growth since its IPO, saw revenue shrink by double digits and earnings collapse by more than 50%.

Now that the pandemic is behind us for the most part, the company is returning to growth, primarily driven by its e-Commerce segment. The company reported an increase of 123% in terms of online sales and also reported a 101% increase in direct-to-consumer sales in Mainland China.

However, the stock has gone through a double digit correction since posting this blowout quarter. Why? Compressing margins, analyst downgrades, rich valuations, and the company’s overall cyclical nature during the summer months.

Canada Goose, despite still trading almost 50% below all time highs reached in 2018, is still not cheap by any stretch of the imagination. The company is trading at 27 times forward earnings. With this high of an earnings multiple, there is going to be significant pressure on the company to perform in order to justify the valuations.

And considering the company has tempered its outlook moving forward and over 21% of its retail stores still remain closed, it might be too big of a task.

This isn’t a company that I’d be avoiding at any point in time. If the company can perform well over the summer time, this is a stock I’d revisit in the latter part of 2021. But, it’s firmly in “show me” territory right now.

A beat up Canadian gold stock with an attractive proposition

When I look for Canadian gold companies, I primarily look for those with production profiles that stick to reliable jurisdictions like North America or Australia. Why? Well, they reduce your risk for ruin if a political event were to happen.

Want a recent example? Look no further than Centerra Gold (TSE:CG), which saw its stock price crumble after one of its mines was taken over by the Kyrgyz government.

So, a company like Equinox Gold (TSE:EQX) provides an attractive opportunity as the company has operations in Canada, The United States, Mexico, and Brazil. And, it’s increasing production at a rapid clip.

The company has 7 producing mines, with another 4 in operation and plans to take gold production from 630,000 ounces in 2021 to over 1.2 million by 2024, one of the highest production growth rates of its peers. Considering this is a company that only started to produce in 2018, the growth is extensive.

However, it’s not all roses with Equinox, as all in sustaining costs in the first quarter of 2021 were significantly higher than competitors. AISC of $1,482 don’t have much wiggle room if the price of gold were to drop. However, the company has been consistently reducing costs at its current operations, and putting into the development new ones that should lower its overall cost profile.

Equinox just started trading in late 2017. So, there isn’t much in terms of historical valuation to go off of. However, this is a company that is trading at less than 8 times 2021 earnings, and despite the company being young, management has provided investors with mid single digit return on assets, return on equity, and return on invested capital.

Equinox will need to reduce overall costs to be competitive long term, but it’s well on its way. If you’re looking for a higher risk gold play, it’s worth a look. Most analysts have anywhere from a $14-17 price target on the company, indicating over 55% upside on the high end.

This article was originally published at https://www.stocktrades.ca/top-canadian-stock-to-avoid-another-to-buy-this-summer/