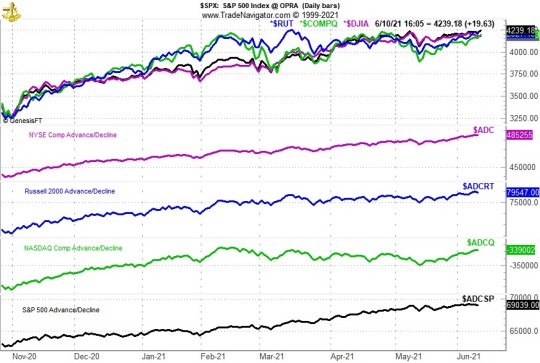 When NASDAQ turned and its advance/decline began trending lower, DJIA, S&P 500 and Russell 2000 essentially went nowhere and traded in a range. Bullishly, it appears NASDAQ’s advance/decline line appears to have bottomed in mid-May and is on the verge of eclipsing its peak from February. Broad participation across all the major indexes is a bullish sign and is generally indicative of a healthy move higher is underway. S&P 500 closed at a new all-time high today. DJIA, NASDAQ and Russell 2000 are closing in on their respective all-time highs.

In the near-term, new all-times are likely. However, June is the last month of NASDAQ’s “Best Eight Months” and historically soon after the start of the second half of the year, around mid-July, markets have stalled out and tended to slip into a sideways to lower trend. Inflation trends and the Fed are two possible catalysts that could clip the market’s wings this year. Inflation could prove to be more than just transitory and at some point, perhaps sooner than expected, the Fed will likely begin tapering asset purchases.