To make sense of this table, pick a grouping, say PE ratios. The Risk On/Off columns highlight the conventional wisdom that low PE stocks are safe and high PE stocks are risky. The returns columns report on what companies in the top and bottom deciles of PE ratios have earned during this crisis period, in both percentage and dollar terms. Thus, the stocks with the highest PE ratios (top decile) have seen their market capitalization increase by 10.81% ($674 billion) while stocks in the lowest PE ratio decline have seen their market values drop by 8.31% ($246 billion).  On almost every measure that I use for risk in this table, this market has pushed up the valuations of the companies that would be considered riskiest and pushed down the values of the companies that would be considered safest.  The only risk categorization where punishment has been meted out to the riskiest companies is financial leverage, with the companies that have the most debt (in net debt to EBITDA terms) seeing market capitalization decrease by 15.49% ($1,082 billion), while companies that have the least debt have seen market value increase by 12.32% ($300 billion). It is still only five months into the crisis, and markets can surprise and shift quickly, but at least from today’s vantage point, this crisis has played out in a most unusual way, with the riskiest companies increasing in value, at the expense of the safest, with debt-driven risk being the exception.
2.  IPOs
One of the most observable measures of market confidence in access to risk capital is initial public offerings, since companies going public are often younger, more risky companies. The best way to illustrate this is to look at initial public offerings over time, measuring both the number and dollar value raised in these offerings:
In terms of number of initial public offerings, the 1990s clearly set a standard that we are unlikely to see in the near future, and while the dot com bust brought the IPO process back to earth, you can see the damage wrought by the 2008 crisis. In the last quarter of 2008, as the crisis unfolded, there was only one initial public offering made in the US and the drought continued through 2009. While the number of IPOs has remained well below dot com era levels, the value raised from IPOs bounced back in the last decade, reflecting the fact that companies were delaying going public until they were bigger in market cap terms, with 2019 representing a year with several high-profile IPOs that disappointed investors in the after-market. When the COVID crisis hit in February, the expectation was that just as in prior crisis, the IPO process would come to a grinding halt, as private companies waited for the return on risk capital. In the graph below, I look at initial public offerings (both in numbers and dollar proceeds), by quarter:
As with venture capital, there was a pause in the IPO process, in the first few weeks, and you can see that in the first quarter numbers. However, initial public offerings returned to the market in the second quarter, in both numbers and dollars, and the pipeline of IPOs is filling up again. In fact, I have not counted IPOs of SPACs (or blank check companies) in my statistics in my analysis, and there were quite a few of those in the second quarter of 2020, another indicator of investors willing to take risk.
3. The Price of  Risk (Equities)
When risk capital is on the move, the number that best reflects its movement is the equity risk premium, rising as risk capital becomes scarcer and falling with access. During 2008, for instance, my estimates of the equity risk premium reflected this fear factor, rising from 4.4% on September 12 yo a high of 7.83% on November 20, before dropping back to 6.43% on December 31 (still well above pre-crisis levels): 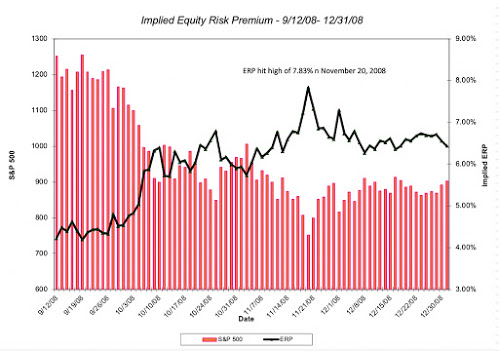 I have reported that process during this crisis, but my estimates of the equity risk premium for the S&P 500 are in the graph below:
The story embedded in this graph is the same one that you see in the VC and IPO pictures. In the first few weeks of the COVID crisis, the price of risk in the equity markets surged, just as it had in 2008, hitting a high of 7.75% on March 23. In the weeks since, equity risk premiums have almost dropped back to pre-crisis levels, as risk capital has come back into the market. Incidentally, this return of risk capital is not just a US-phenomenon, as can be seen in the picture below, where I report my estimates of the equity risk premiums, by country, through the crisis:
With each country, I report three numbers, an equity risk premium from the start of 2020 (reflecting pre-crisis values), from April 1, 2020, at the height of the market meltdown, and from July 1, 2020, as capital has returned. Just to illustrate, Brazil saw its equity risk premium rise from 8.16% on January 1, 2020, to 11.51% on April 1, 2020, before dropping back to 9.64% on July 1, 2020. Put simply, risk capital has returned to the riskier emerging markets, though the return has not been as complete as it has been in the US.
Risky Debt
Much of the discussion about risk capital so far has been focused on equity markets, but there is risk capital in other markets as well. In the private lending market, risk capital is what supplies debt to the companies most in need of it, often distressed, and in the corporate bond market, it manifests itself as demand for the riskiest corporate bonds, usually below investment grade.
The COVID Effect – Early Days
In the first few weeks of the crisis, the key concern that investors had about the economic shut down was whether companies that carried significant debt loads would be able to survive the crisis. This fear manifested itself not only in concerns about bankruptcies, but also in government bailouts to save companies that were most exposed, such as airlines. There was also talk of how this crisis could spread to other sectors burdened with debt, and put the banking system at risk. It is these fears that led the Fed to announce on March 23, 2020, that it would be provide a backstop in the corporate lending market, proving loans to companies in distress and buying corporate bonds. There is debate about whether the Fed should be playing this role, but it cannot be denied that this action, more than any other by any entity (government or central bank) during this crisis, changed its trajectory.  It is not a coincidence that Boeing which had been having trouble raising debt, in early March, was able to borrow $25 billion in the corporate bond market a few weeks after the Fed’s announcement. In fact, as you will see in the section below, the Fed’s announced opened the flood gates for corporate bond issuances and caused a turnaround in corporate bond yields.
The COVID Effect – Corporate Bond Issuances
In the corporate bond market, risk capital is the lubricant that provides liquidity in the high yield bond market, and allows companies that are below investment grade to continue raising capital. Not surprisingly, during crises, it is this portion of the corporate bond market that is affected the most, with yields climbing and new bond issues becoming rarer. You can see this phenomenon play out in the graph below, where I look at corporate bond issuances by year:
During the 2008 crisis, bond issuances declined across the board in the last quarter of 2008 and the first quarter of 2009, but the drop was much more precipitous for high yield portion. During the COVID crisis, the numbers look very different: 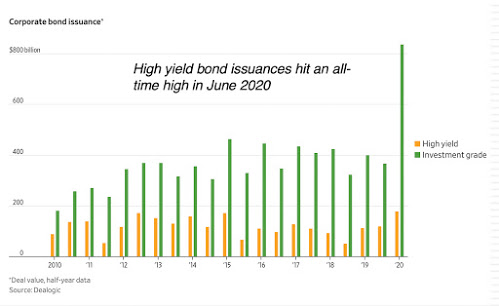 After a brief pause in issuances in the first few weeks (between February 14 and March 20), bond issuances returned stronger than ever, with high yield bond issuances hitting an all-time high (in dollar value) in June 2020. For the moment, at least, the Fed’s backstop bet has paid off in the bond market.
The Price of Risk (Bonds)
As with the equity market, there is a market measure of access in risk capital in the bond market, and it takes the form of default spreads. During a crisis, as risk capital leaves, you see spreads increase, as was the case in the last quarter of 2008: 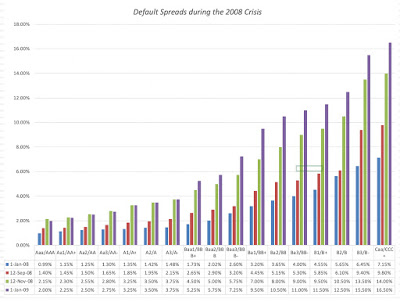 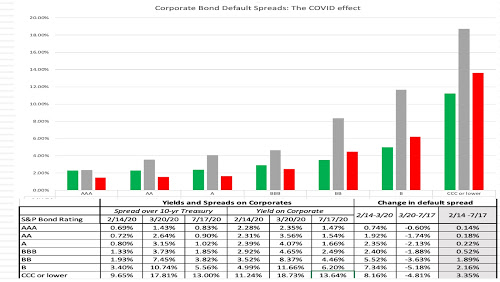 As in 2008, default spreads surged between February 14 and March 20, as the crisis first took hold, but unlike 2008, the spreads have rapidly scaled down and are now lower for the higher investment grade classes than they were pre-crisis and only marginally higher for the lowest rated bonds.
Explaining the Resilience
If you accept the evidence that risk capital has stayed in the market during this crisis, in contrast to its behavior in prior crises, the follow-up question is why. For some of you, I know the answer is obvious, and that is that this market recovery has been engineered and sustained by central banks. While there is some truth to the “Fed did it” argument, I think it is too facile and misses other ingredients that have contributed.
Five months into this crisis, I am still learning, and there is much that we still do not know about both the virus and markets.
YouTube Video
Data
Viral Market Update Posts