After 20 years of doggedly searching for diamonds, Arctic Star’s time to shine seems to have finally arrived.

This demonstrated an initial proof of concept for its latest innovative approach to finding diamondiferous kimberlite pipes in the close vicinity of two of the world’s most lucrative diamond mines.

Now a spring program of delineation drilling, involving about 10 holes, is expected to build on this initial drilling success by testing the tonnage potential and grades of the very large Sequoia pipe complex.

This massive pipe complex constitutes the best prospect to date among Arctic Star’s first several diamondiferous discoveries within the expansive Diagras Project area. It is also the largest of its kind throughout the entire Lac de Gras diamond fields.

Indeed, the mystery to finding Lac de Gras’ remaining hidden treasure troves of diamonds may be finally revealing itself thanks to the use of Arctic Star’s disruptive scientific lines of investigation.

This involves a fresh approach to analysing geophysical surveying data. In fact, it is no coincidence that all four of the kimberlites found by Arctic Star so far are large and have no magnetic signatures.

These are very important details because all the richest and most prolific pipes in the nearby Diavik mine exhibit similarly weak or non-existent magnetic signatures. This intriguing reality is helping to refine the company’s prioritization of key targets, according to Buddy Doyle, Arctic Star’s vice president of exploration.

He believes it will help to better identify prospectively economic pipes, mindful that pipes with strong magnetic signatures are easier to find but tend not to be richly mineralized with diamonds.

So how good is his assessment that Arctic Star is hot on the trail of prospectively world-class diamond pipes? Well, it appears to be pretty good. After all, he’s the guy who found the nearby diamond pipes that become the Diavik mine nearly 30 years ago when he was running Kennecott Canada’s diamond exploration program – which was a subsidiary of the world’s biggest mining company, Rio Tinto plc. 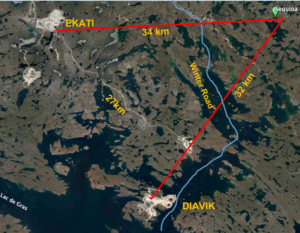 How Sequoia Measures Up

Doyle now believes that the Sequoia pipe complex has the size and grade potential to measure up favourably to Lac de Gras’ best pipes – ones that have produced tens of millions of carats at the nearby Ekati and Diavik mines.

Together, Diavik and Ekati have produced over $40 billion worth of some of the world’s best-quality diamonds to date. In fact, these ethically sourced, gem-quality diamonds command especially high prices.

Doyle’s theory just got a big shot in the arm by way of some tantalizing laboratory results that Arctic Star just received. Conducted by the renowned Saskatchewan Research Council (SRC), these third-party assays reveal that the diamond chemistry data for the Sequoia pipe complex is exceptional.

The report found that 50% of the micro diamonds recovered from core samples in last year’s discovery drill holes can be classified as “Type IIa” diamonds. These are the best of the best – as defined by their prolific size and purity.

More specifically, Type IIa diamonds tend to be super-sized (between 50 carats each in size and hundreds of carats) and have the greatest brightness and clarity (completely colourless) of all diamonds. Unlike all the others that are mined, these ones are virtually devoid of impurities, which is why they are so coveted and expensive.

They are so rare that Type IIa diamonds only make up 1-2% of all natural diamonds. Some of the biggest Type IIa diamonds are the  giant 3,106-carat Cullinan (weighing-in at well over a pound), the 105.6-carat Koh-i-Noor (which is part of the Queen’s Crown Jewels), and the 303-carat Lesedi La Rona (which sold for US $53 million in 2017).

Doyle believes that SRC’s findings bode well for the existence of diamonds that are in excess of 50 carats in size at Sequoia.

The company expects to get a preliminary understanding of the overall grade of the pipe complex with a planned bulk sample in 2023. This would be the next logical step following completion of this spring’s delineation drill program. Such a pivotal process should go a long way towards determining if Sequoia has a shot at becoming a multi-billion-dollar mine. 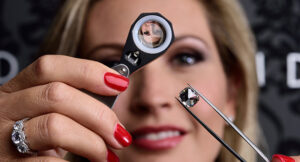 Over the years, it’s proven a lot easier to find diamond pipes that have magnetic signatures than ones that don’t. Therefore, it has become commonplace for most explorers, including major companies, to take this path of least resistance – especially when feeling the heat from investors to find something worth getting excited about.

That’s the upside. The downside is that these pipes have typically proven to be of much lower quality than those that have a small magnetic signature, or even none at all. It is worth reiterating that the Diavik mine is mostly made of a handful of non-magnetic pipes.

Yet the traditional approach to finding economic diamond pipes has nonetheless proven a successful strategy for several deep-pocketed companies. However, they can afford to drill plenty of duds in the hopes of at least finding several richly mineralized pipes among them.

Hence, Doyle is stepping outside of the box to focus on the more elusive pipes that have the poorest magnetic signatures. His success to date has been thanks to his use of “gravity” and “EM” geophysical surveying tools.

For investors trying to picture this, using geophysics to locate the surface features of diamond pipes is not an easy science. It requires considerably fine-tuned skills to interpret all the data being examined. It’s much like trying to find the knots on a piece of plywood but with a blindfold on, and with only your sense of touch to guide you.

It’s ’s a rare skill, but one that Doyle says he’s gotten good at after decades of diamond sleuthing experience. Exactly how good? Well, he managed to hit the ball out of the park once already with Diavik’s best pipes. Let’s see if this spring’s drill results offer up the kind of encouragement that suggests another home run is in the offing.

Also, it’s worth considering the fact that Canada is long overdue a new multi-billion-dollar diamond discovery. There has not been a truly world-class mine of prolific size discovered in Canada since the Ekati and Diavik mines were found in the 90s. 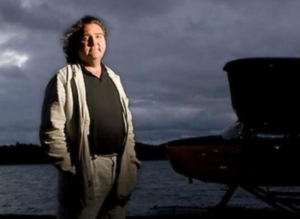 It bears repeating that a new, truly world-class diamond discovery is long overdue. This reality is also underscored by the fact that Diavik and Ekati are close to being mined-out. Plus, only several additional mines have been commercialized in Canada in recent years, with varying degrees of success. Outside of Lac de Gras, only the much smaller Gahcho Kue (NWT) and Renard (Quebec) mines mine are still in operation.

If Sequoia proves to be richly mineralized with large, high-quality gems – namely Type IIa diamonds – then a potential multi-billion dollar mine could eventually become a reality at a time when Canada needs to replenish dwindling output.

Arctic Star’s story has some additional sizzle in the steak by way of some step-out drilling that is testing several large, high-priority drill targets within the same clusters of diamond pipes that are home to Ekati and Diavik. Each of these targets at Diagras have large geophysical signatures that attest to their potential to be impressively sized. News on this drilling is expected in the coming weeks.

That all said, Arctic Star’s share price is still very inexpensive relative to the company’s risk/reward profile. Indeed, the company’s Big Picture is only now beginning to come into sharp focus. This clearly offers plenty of runway for higher share price multiples in the advent of meaningful news flow in the coming months.

From a technical perspective, the company has a share structure of only around 210 million fully diluted shares, with a trading float of about 150 million. This means that its relatively tiny, over-sold market capitalization of about $15 million has considerable latitude to grow exponentially in the advent of good news that leads to a bulk sample.

Keep in mind, history shows that when certain diamond stocks start to rally on meaningful news, their trajectories tend to go parabolic. So, keep a sharp eye on this story in the coming months. It may not stay extremely undervalued for long.

ABOUT THE AUTHOR: Marc Davis has a deep background in the capital markets spanning 30 years, having mostly worked as an analyst and stock market commentator. He is also a longstanding financial journalist. Over the years, his articles have appeared in dozens of digital publications worldwide. They include USA Today, CBS Money Watch, The Times (UK), Investors’ Business Daily, the Financial Post, Reuters, National Post, Google News, Barron’s, China Daily, Huffington Post, AOL, City A.M. (London), Bloomberg, WallStreetOnline.de (Germany) and the Independent (UK). He has also appeared in business interviews on the BBC, CBC, and SKY TV. An enthusiastic shareholder of Arctic Star Exploration, his opinions are therefore biased and should not be relied upon for making investment decisions. That said, Arctic Star did not pay for this article. Nor did anyone else.