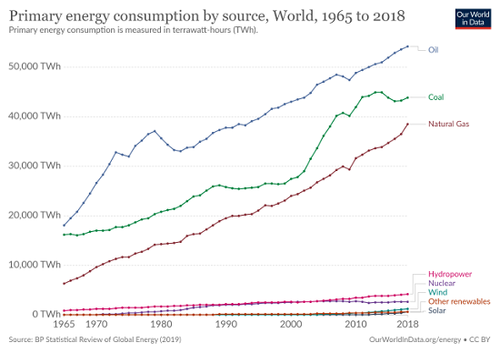 Do We Really Want To Return To “Normal” If “Normal” Is Destroying The Planet?

Change the incentives, and the outcomes change.

Ecologist Howard Odum provided a profound insight into human expansion, stagnation and collapse. He argued that humans are wired to maximize power output (i.e., consumption) rather than maximize efficiency.

In other words, humans are wired to strip the tree of every ripe fruit and throw a party, have more children and use the surplus food to feed an army of conquest. Efficient use of resources is simply not part of what I term Wetware 1.0, the set of tools that was selected and optimized over the past 200,000 years for small hunter-gatherer tribes roaming an apparently near-infinite world.

We’ve squandered the surpluses enabled by hydrocarbons to maximize energy output (consumption) rather than achieve efficiency.

That is finally coming around to haunt the entire “infinite growth on a finite planet” status quo.

Here’s the happy story being promoted by the status quo: we can keep overconsuming / wasting resources on a vast scale by electrifying everything that is currently powered by hydrocarbons: The Electrification of Everything: What You Need to Know.

There are a great many problems with this fantasy. One is that per Odum, humanity doesn’t replace hydrocarbons with wind-solar, it consumes all the alt-energy being added, too. Adding energy just increases consumption.

Another is that the quantity of scarce minerals and resources needed to replace hydrocarbons with so-called renewable energy is so vast that it’s unrealistic.

As I’ve noted many times, per analyst/educator Nate Hagens, “renewables” are actually ‘replaceables’, as solar panels and wind turbines wear out and need to be replaced every 20-25 years, if not sooner.

The scale of energy consumption is so vast and the percentage supplied by solar and wind is so insignificant. Most charts lump solar and wind with hydropower and biofuels (wood), but wind and solar provide at best 3% of global energy, after all the tens of billions of dollars that have been invested.

To provide the majority of global energy consumption, we’d need to increase solar-wind 20-fold, from 3% to 60%. The problem, as Tim Watkins explains, is the Earth doesn’t have enough scarce minerals to build this monstrous global system, and then replace it every 20-25 years: Are you still buying this?

“Challenges of using ‘green energy’ to power electric cars: If wind farms are chosen to generate the power for the projected two billion cars at UK average usage, this requires the equivalent of a further years’ worth of total global copper supply and 10 years’ worth of global neodymium and dysprosium production to build the windfarms.”

“To replace all UK-based vehicles today with electric vehicles, assuming they use the most resource-frugal next-generation NMC 811 batteries, would take 207,900 tonnes cobalt, 264,600 tonnes of lithium carbonate (LCE), at least 7,200 tonnes of neodymium and dysprosium, in addition to 2,362,500 tonnes copper. This represents, just under two times the total annual world cobalt production, nearly the entire world production of neodymium, three quarters the world’s lithium production and at least half of the world’s copper production during 2018.”

Every kilogram of these scarce minerals must be mined, transported and processed with hydrocarbons.

The problem with wind and solar is intermittency: modern industrial economies require steady electrical power 24/7 or they fail. Wind and solar generate power intermittently, meaning they can’t generate a steady supply 24/7 nor can they generate electricity when consumers want to use it.

So the intermittency problem becomes a storage problem: how can we store surplus electricity in quantities large enough to power our vast consumption when the wind dies and the sun goes down?

There are no cheap, easy answers to storage, and ideas such as converting it all to hydrogen are not realistic due to cost and safety issues. There isn’t enough lithium and other scarce minerals to build batteries for 2 billion vehicles and storage for every electrical grid on Earth. (And note that lithium batteries have very limited lifespans and need to be replaced every decade, if not sooner. Very few batteries are recycled, so recycling billions of batteries is also a fantasy.)

As Gail Tverberg observes in her recent post, How the World’s Energy Problem Has Been Hidden:

“So-called renewable fuels tend to be very damaging to the environment in ways other than CO2 emissions. This point is made very well in the new book Bright Green Lies: How the Environmental Movement Lost Its Way and What We Can Do About It by Derrick Jensen, Lierre Keith and Max Wilbert. It makes the point that renewable fuels are not an attempt to save the environment. Instead, they are trying to save our current industrial civilization using approaches that tend to destroy the environment. Cutting down forests, even if new trees are planted in their place, is especially detrimental. Alice Friedemann, in her new book, Life after Fossil Fuels: A Reality Check on Alternative Fuels, points out the high cost of these alternatives and their dependence on fossil fuel energy.”

Many people I respect see thorium nuclear reactors as the answer, but like all the other proposals to replace the staggeringly large consumption fueled by hydrocarbons with some other source, it’s not as easy in the real world as it is conceptually.

India has reserves of thorium and has an ambitious plan to build thorium reactors. But the thorium nuclear fuel cycle is extremely non-trivial, and despite billions of rupees invested, India has yet to complete a single large-scale thorium reactor–and neither has any other nation. There are seven research reactors scattered around the world, but no actual power plants. India’s Ambitious Nuclear Power Plan–And What’s Getting in Its Way:

“With the commercialization and enhanced use of renewable energy technologies, the per unit cost of electricity produced from renewables has gone down significantly. The cost of solar power in India right now is Rs 2.62 per unit, almost half of the per unit cost of electricity being produced by the recently operational Kudankulam nuclear power plant (Rs 4.10 per unit).”

The problem is we’ve based our entire global economy on maximizing consumption, not efficiency, so that waste = growth = maximizing profits.

Given that we incentivize profits earned from increasing waste (i.e. “growth”), this shouldn’t surprise us.

The answer isn’t to attempt to replace a disastrously inefficient and wasteful system with replaceable energy sources–a delusional fantasy. The answer is to set aside our Wetware 1.0 programming to maximize energy output and consumption in favor of maximizing energy efficiency and conservation.

There are a number of ways this transition could be made. For example, rather than tax human labor, we could tax the consumption of non-renewable resources.

“Yet the reason for this inertia is simple: the price we pay for fossil fuels, and most other non-renewable resources, is far too low, because we don’t pay for their creation which took hundreds of millions of years, but only for their extraction. To make matters worse, more than 90% of all taxes are paid on labor in most countries, which discourages employment and forces automation into every part of the economy.

This mix-up, a by-product of the industrial revolution, leads to pollution, greenhouse gas emissions, waste production and the unnecessary use of automation, which damages our ecosystems and at the same time deprives future generations of their right to access those scarce resources.”

Do we really want to return to the “normal” of waste = growth = maximizing profit if this “normal” is destroying the planet?

Cutting consumption is anathema in the current mindset of waste = growth = maximizing profit, but the Pareto Distribution suggests we could cut consumption by 80% and still retain 80% of the essentials for a good life such as clean water, healthy food, basic shelter, etc.

As I posted in Musings #9, consider this short film of Market Street in downtown San Francisco shot a few days before the catastrophic earthquake and fire of 1906. A trip down Market Street before the fire (Library of Congress).

Life was pretty good in 1906 San Francisco and many other cities. Now look at the energy consumption around 1900: it was around 15 TWh compared to today’s 160 TWh, roughly 10% of current consumption. And the engines and machines of 1906 were by today’s standards extremely inefficient. Adjust for increases in population and efficiency and it’s clear lower-consumption life is not necessarily a return to living in caves.

Do we really want to return to “normal” if “normal” is destroying the planet?

Waste is everywhere in our way of life because waste is profitable in the current arrangement. What would happen if waste was taxed at very high rates and efficiency was the sole means of maximizing profits?

Charlie Munger (head of Berkshire Hathaway) famously said: “Show me the incentive and I will show you the outcome.” That’s how humans operate: we respond to the incentives presented, even if they destroy the planet.

Change the incentives, and the outcomes change. What if efficiencies and conservation earned the biggest rewards and human labor was freed from taxation? The outcomes would improve very dramatically–and that’s just the start.