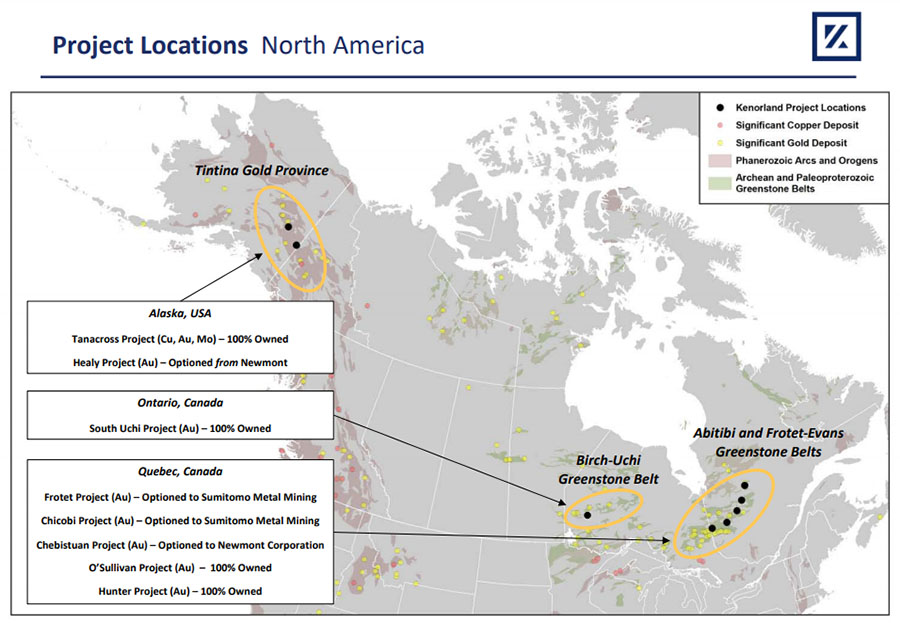 Kenorland Minerals has been digging up some high-grade numbers at its JV Regnault gold project.

Kenorland. It sounds like one of a half dozen or so quirky dramas airing on Paramount+ but if it were a TV show—given its recent exploration success—it would likely be primetime viewing on the Discovery Channel.

Step out drilling at Frotet has defined a 550-meter strike length along the Regnault 1 (R1) structure, which remains open to the east, west and down dip.

That program will alternate between infill and step-out drilling further along the mineralized vein corridor, both laterally and at depth. It will also target other known gold-bearing structures in what could be emerging as the Regnault trend in the Frotet-Evans greenstone belt.

“Regnault is emerging as a very interesting new discovery… (Kenorland) has secured a strategic partner that will have the funds for any (capital expenditures), which takes away some of the financing risk. KLD-V is one to watch,” Lemieux told Streetwise Reports.

Since then, Sumitomo has earned an 80% interest in Frotet by funding most of the exploration. Kenorland owns the other 20% and remains the operator. As such the junior gets 10% of any exploration work budget as a management fee. This tidy bit of business helps defray Kenorland’s share of ongoing exploration costs.

If either party’s stake falls below 10%, it converts to a 2% uncapped net smelter royalty.

The ball started rolling at Frotet following two years of systematic till sampling, which led to an initial 7,800-meter drill program in 2020.

“We had done a lot of research on other discoveries of large gold systems in Canada,” explains Kenorland President and CEO Zach Flood. “After looking at all the discoveries of +2-million-ounce deposits in Canada, we noticed that all of them had at least a 100-gram per meter hit on the first pass drill program. That hit told us that we’re on to something significant…It’s not very often that you find a new significant gold system that no one has ever known about.”

In fact, about 75% of the holes in the initial drill program hit notable mineralization over a 2-km strike length. Flood notes that that is the general footprint of the system; however the actual veins themselves may be striking parallel to this, increasing the potential for further discoveries.

“The footprint is big; there’s very high grades associated with it and in general we’ve hit many economic looking grade and widths,” he says.

Across the continent, Kenorland is spending $2 million to drill the Healy gold project in Alaska.

The 4,000-meter program will drill 10 holes into targets determined by gold-in-soil anomalies. It should wrap up by the end of July.

“Healy is an incredible opportunity to make another grassroots discovery in a prolific gold district up in Alaska called the Goodpaster,” Flood says.

He adds: “The largest value creation in our industry is through the discovery of new mineral deposits. And that is exactly what we are trying to achieve, on multiple projects, including Healy.”

The most significant discovery in the Goodpaster District is the Pogo gold mine. It has produced almost 4 million ounces (Moz) to date. An additional 4.6 Moz of gold sits in the Measured and Indicated category.

Healy was identified by geologists working for Newmont Mining (NEM:NYSE) in 2010 through regional stream sediment sampling that started in eastern Alaska and went all the way to the Yukon-Alaska border.

Newmont staked the project because there was a cluster of about six streams with anomalous gold values all clustered together. It’s now a 18,470-hectare land package that Kenorland secured in 2018 by agreeing to spend $4 million on the ground over four years. Once vested, the two companies would form a 70-30 joint venture.

“It’s really important to note that there was no work filed on the (Healy) ground with the state of Alaska, prior to Newmont staking it…It would be very hard to replicate the regional work that Newmont did in 2010 and 2011 that led them here. So we’re quite confident that if there’s another big gold system out there, we’re probably in the right place.”

Having experienced people helps, too.

Elsewhere in Alaska, Kenorland owns 100% of the Tanacross copper-gold-molybdenum porphyry deposit. One intercept drilled on the property in 2019 returned 276 meters grading 0.30% copper, 0.16 g/t gold and 0.036% molybdenum.

“In terms of copper equivalence, it’s definitely getting above the average grade that you would see in the Northern Cordillera,” Flood says.

Freeport-McMorRan (FCX-NYSE) had optioned Tanacross in 2018 and 2019, but left the keys on the table when the market crashed in March 2020.

Kenorland currently has a fully diluted share float of about 55 million shares, with Haywood Securities Chairman John Tognetti holding about 20% and management with about 30%.