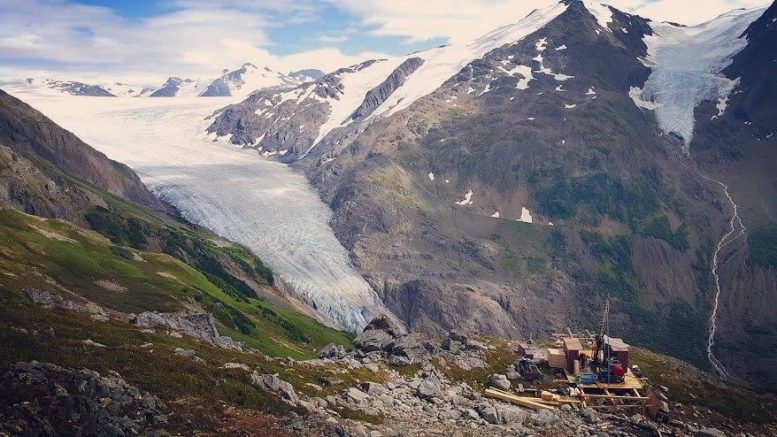 The Golden Triangle of British Columbia, located in the northwestern region of the province, contains some of the most important deposits of gold in Canada’s history. This region has played a major role in Canada’s mining industry for decades, attracting prospectors and companies from around the world.

While the focus has been on silver and other economically important materials, with changing technology and a changing climate, gold is moving to become the major player in the Golden Triangle.

One of the most visual aspects of our changing climate is the melting and receding glaciers all over the world. This phenomenon is happening in British Columbia as well, with glaciers on both sides of the Rocky Mountains shrinking.

This INNspired article is brought to you by:

Goldplay Mining (TSXV:AUC) is a Canadian junior exploration company focused on exploring and advancing gold, silver and copper assets.Send me an Investor Kit

“Those glaciers in and around the Golden Triangle are thinning about half a metre to a metre a year. This doesn’t sound like a lot but taken over 30 years, we’re talking about 100 feet of lowering,” said Brian Menounos, Canada research chair in glacier change at the University of Northern B.C.

The receding glaciers have opened up new economic opportunities for prospectors and mining companies looking to access and extract minerals from previously unreachable regions buried under a thick shield of ice thousands of years old.

The ultimate “fate of the glaciers is going to be determined by greenhouse-gas emissions, especially over the last 30 years and the next 80,” according to Ben Pelto, lead author of a recent study of glacier sizes and changes. Pelto also stated that “glaciers will disappear from the basin in about 65 to 80 years.”

History of the Golden Triangle

British Columbia’s Golden Triangle mining district extends from the south near Stewart, British Columbia, and heads north to the Alaskan panhandle and is an important source of gold and other economically important minerals. With its rich and diverse geology, the Golden Triangle has the potential to host several types of the world’s most profitable deposits, including high-grade gold and silver veins, large-scale porphyries and volcanogenic massive sulfide.

During the 19th century, the Golden triangle experienced three gold rushes, beginning with the Stikine Gold Rush of 1861. The first official mine, aptly named Premier Gold, began operating in 1918, but it wasn’t until the heyday of the Eskay Creek and Snip mines in the 1990s that the area earned its current moniker.

Exposed minerals and the rush to explore

As glaciers recede and minerals become exposed, prospectors, miners and other companies are rushing to explore areas not included in the original gold rushes. One such company is Goldplay Mining (TSXV:AUC) and their Scottie West gold project.

Historically, work in this area has been focused on the neighboring Scottie Gold mine to the east, mining both silver and gold. The Scottie West property has undergone very little work because the majority of the property has been covered by glaciers.

As the glacier is retreating, surface rock exposures are appearing, providing new and previously inaccessible exploration opportunities. Goldplay Mining is hoping to capitalize on this newly exposed area.

Throughout 2020, Goldplay and their partners at Roughrider (TXSV:REL) have conducted an airborne geophysical survey, evaluating and comparing the data with the historical airborne magnetic survey data. The gathered information will be used to conduct the initial prospecting and other geological work on the property in the summer of 2021.

Golden [nxtlink id="269108"]Goliath Resources (TSXV:GOT) is another company that has increasingly focused on the Golden Triangle over the last 3-5 years because of the receding glaciers. Roger Rosmus, CEO of Goliath Resources, said, “our hope is to find some brand new elephant-sized type discoveries,” while talking about how even without digging, his team has discovered gold, copper and silver deposits directly at the surface.

“This unique corporate combination creates an exciting gold-silver explorer with seven historic mines and over 500 km2 of claims in the heart of one of Canada’s most prolific mining camps,” stated Ian Slater, Chief Executive Officer of AUX. “The Stewart Camp has been in desperate need of consolidation on this scale for decades. I’m delighted to be part of this compelling new opportunity.”

Origen Resources (CSE:ORGN) is also active in the region, having recently received its permit to commence phase 1 drilling on its LGM property in the Golden Triangle.

It is clear that there is substantial interest in this area as companies rapidly push to secure the right permits to kickstart their exploration and development programs. Through further exploration, first-movers in the Golden Triangle region should be able to capitalize on newly discovered gold deposits.

British Columbia’s Golden Triangle has been one of the top mining jurisdictions in the world for decades. As glaciers in and around the Golden Triangle recede, surface rock exposures are appearing, providing new and previously inaccessible exploration opportunities. Investors should pay attention to these new discoveries and plans for the future, which may hold dramatic upside potential.

This INNSpired article was written according to INN editorial standards to educate investors.

INN does not provide investment advice and the information on this profile should not be considered a recommendation to buy or sell any security. INN does not endorse or recommend the business, products, services or securities of any company profiled.

The information contained here is for information purposes only and is not to be construed as an offer or solicitation for the sale or purchase of securities. Readers should conduct their own research for all information publicly available concerning the company. Prior to making any investment decision, it is recommended that readers consult directly with Goldplay Mining and seek advice from a qualified investment advisor.

By completing this form, you are giving consent to receive communication from Goldplay Mining using the contact information you provide. And remember you can unsubscribe at any time.