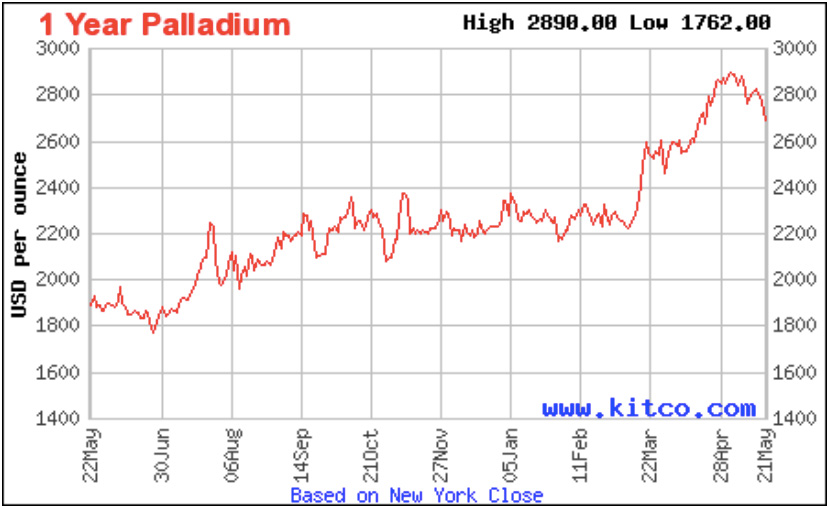 Guy on Rocks’ is a Stockhead series looking at the significant happenings of the resources market each week.

I would have thought Bitcoin’s value is now more speculative than an alternative currency as more governments are bound to follow China’s lead.

Uranium (figure 2) had its fourth straight rise, touching $US31/lb on the back of strong buying in late March 2021.

Interestingly uranium producers have gone back to market and are stockpiling as they believe they can buy it cheaper than they can produce it at. How long this can continue for though, nobody knows.

Thanks to Paydirt who put on a lunch on Thursday at the Pan Pacific in Perth, hosting ASX-listed uranium developers Deep Yellow (ASX:DYL), Vimy Resources (ASX:VMY), 92 Energy (ASX:92E) and Bannerman Resources (ASX:BMN).

There was some good banter from some hardened veterans such as Deep Yellow managing director John Borshoff (founder and former head of Paladin Energy, ASX:PDN) who reminded the audience that the average time from discovery to production is around 10 years.

Anyway, uranium equities are on the march ahead of some relatively modest rises in the spot price. However, as most informed commentators will tell you, the only way of reaching the 2030 renewable energy targets is to build more uranium reactors. So, it looks like more looming supply side pressure in uranium.

Boab Metals (ASX:BML) (figure 3) has started a phase V drilling program at its 75 per cent-owned Sorby Hills lead-zinc-silver project (JORC resources of 44.9 million tonnes at 4.3 per cent lead equivalent) in the Kimberley (figure 4). The company will complete 48 drill holes designed to extend areas of known mineralisation in addition to infill and extensional drilling.

Drilling will also test newly identified lead mineralisation at the Wildcat target and include a maiden program at Eight Mile Creek situated south of Sorby Hills. Boab Metals remains in a solid financial position with $14m in cash and I am expecting to see good results here reverse the recent share price slide.

Strike Resources (ASX:SRK) came on to the radar around 13c last year (Figure 5) and has had a strong run, finishing the week at 26c.

It appears the financial investment decision for the 100 per cent owned Paulsen’s East iron ore project (JORC reserve of 6.2 million tonnes at 59.9 per cent iron) (figure 6) is drawing closer, with the mining proposal application targeted for completion  in Q3 2021.

The October 2020 feasibility study demonstrated a compelling set of financial metrics based on a $16m capital expenditure and a 1.5-million-tonne-per-annum operation over a four-year mine life trucking high-grade direct shipping ore (DSO) (lump and fines) to Port Headland.

The project showed a pre-tax net present value of $140m based on a 62 per cent fines price of $US115/tonne compared to the current spot price of just under $US210/tonne. C1 costs were a very respectable $91/tonne (comparing favourably to Fenix Resources, ASX:FEX at $93/tonne).

First cash flow is also expected in June of this year from SRK’s Apurimac DSO project (JORC Resources of 269 million tonnes at 57.3 per cent iron) in Peru, where production is ramping up to 125,000 tonnes per annum, with potential to expand from other sites on the project area.

SRK is targeting the high-value premium and lump 64-65 per cent iron ore, the latter commanding premiums of $US20-30/tonne.

The company also spun out its lithium-graphite assets this month to Lithium Energy (ASX:LEL), which is currently trading at 47c (up from a 20c IPO), valuing SRK’s stake at around $16m. At a market capitalisation of around $65m and an enterprise value of under $50m there appears to be plenty of blue sky if SRK can execute its production plans.

Peregrine Gold (ASX:PGD) (figure 7) is another explorer from the Ian Middlemas stable that was listed on ASX in late March of this year after raising $2.5m.

The Pilbara gold project is an early-stage project that consists of three granted exploration licences and four applications covering about 636sqkm within the Sylvania Inlier in the Pilbara (Figure 8).

The tenements are interesting, but with such a tight capital structure (37.4 million on issue and the top 20 holding 52 per cent), with some tailwinds off the back of a 12,000-gram-per-tonne gold assay from another Middlemas company – Odyssey Gold (ASX:ODY) at its Bottle Dump prospect – I can’t help thinking the company is on the lookout for some quality exploration assets.

With an enterprise value of around $9m (diluting for in the money options) and just over $5m in cash, the company is well positioned to hit the acquisition trail.

The post Guy on Rocks: Uranium to rise ahead of ‘Judgement Day’ appeared first on Stockhead.