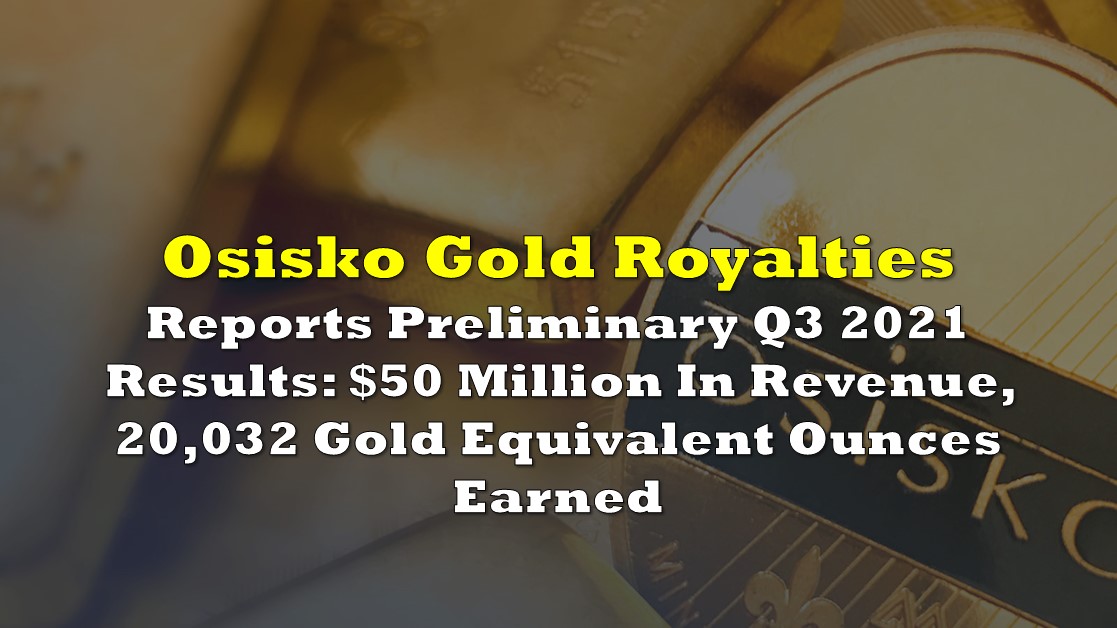 Osisko Gold Royalties (TSX: OR) reported on Monday its preliminary financial and production results for Q3 2021. The royalty firm highlighted $50 million in revenues for the three-month period.

Further down the financials, the company also reported approximately $3.5 million cost of sales, leading to a $46.5 million operating cash margin.

Given the meaningful cash flow generated at current commodity prices, we previously announced a 10% increase to our third quarter dividend and repurchased over 1.7 million common shares in the months of August and September through our normal course issuer bid,” said Osisko Gold CEO Sandeep Singh.

The company also earned approximately 20,032 attributable gold equivalent ounces from its streams for the quarter, excluding 2,452 ounces from the Renard diamond stream. Full details of Q3 2021 results are expected to be released on November 9, 2021.

The firm also provided updates on its current assets, including the proposed acquisition by Gold Resource Corporation of Aquila Resources, including the Back Forty project where the firm holds an 18.5% gold stream and an 85% silver stream. G Mining Ventures also acquired from Eldorado the Tocantinzinho project where the firm holds an effective 0.75% NSR royalty.

Osisko Gold Royalties last traded at $14.15 on the TSX.

Information for this briefing was found via Sedar and the companies mentioned. Not a recommendation to buy or sell any securities. Always do additional research and consult a professional before purchasing a security. The author holds no licenses.