On March 2nd Portofino Resources (TSX-V: POR) / (OTCQB: PFFOF) announced surprising news. Investors have been waiting months for the Company’s Yergo lithium brine project in Catamarca province to receive drill permits (now expected later this month). I’ve written quite a bit about Yergo, some of which I revisit below.

Yesterday’s exciting news is that management has signed an MOU to increase its lithium (Li) footprint in Argentina by up to 6.5 times. That’s right, the equivalent of six and a half Yergos across five parcels (70% [maybe more] of up to 27,000+ hectares if all mining concessions are optioned) in Salta province.

This is a unique arrangement as Portofino is partnering directly with state-owned REMSa. S.A. (Energy & Mining Resources of Salta). Portofino has gained the option (for two years after work starts on any given property) to form an indicative 70%/15%/15% JV with REMSa & private Argentinian company Ronialem. For readers who fear that this arrangement is complex, it’s really not.

Portofino has no set obligations, only opportunities that it will share with its partners. Management believes there are ways to own > 70% of select claims blocks, but they see virtually no scenario whereby they might own < 70%. How prospective are these properties? 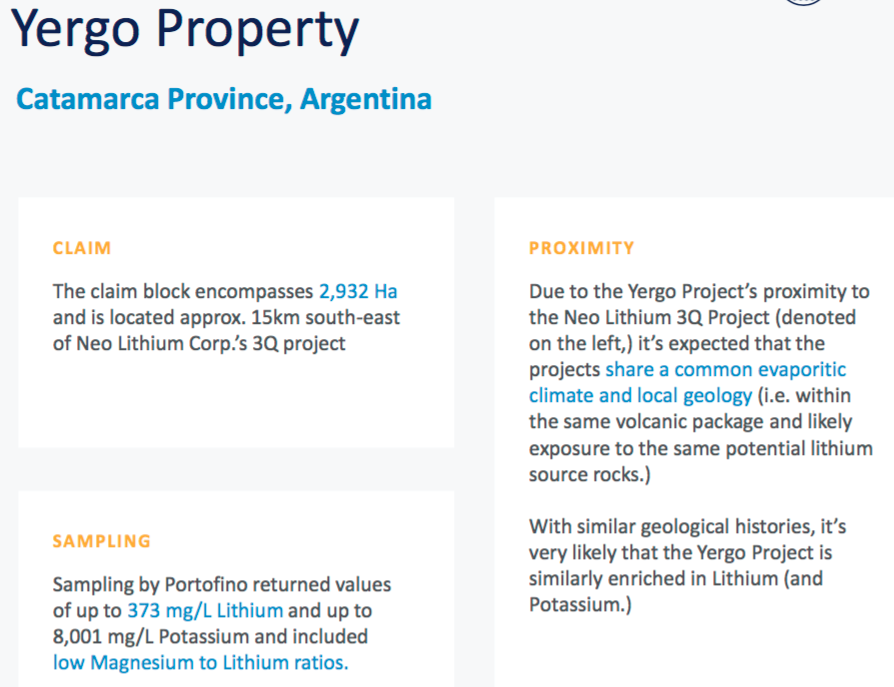 The Pastos Grandes (3,489 hectares) concessions are close to Lithium Americas’ (LAC) project of the same name. The Arizaro (19,111 hectares) — concessions are situated south of the Rincon project that Rio Tinto recently agreed to pay $825M for.

Importantly, management negotiated a preferential right under the same favorable terms to option additional Li brine properties maintained by REMSa. REMSa controls properties that were not included in this initial MOU, and obtains new properties from time to time.

New mining concessions introduced by REMSa above & beyond the initial 27,000+ hectares in the MOU may be subject to a public tender process, but management has a right of first refusal to match any offer. If Portofino & Ronialem choose not to acquire the project, they will be entitled to the GREATER OF four times exploration & evaluation expenditures, OR 50% of gross proceeds from its sale.

A key part of the MOU is that there are no upfront or backend cash or share payments to REMSa or Ronialem. None. And, there are no work commitments. The timing & quantum of exploration performed is in management’s hands. All parties to this arrangement are on the same page, both REMSa & Ronialem are incentivized to help Portofino in any way they can.

How can REMSa help advance projects? This entity has a clearly stated goal to facilitate the development of mining projects in Salta province. To that end, it works with all stakeholders — local communities, mining agencies, politicians, service providers, labor forces, etc. — everyone. This is an ESG team in Portofino’s back pocket formed before ESG was even a thing. 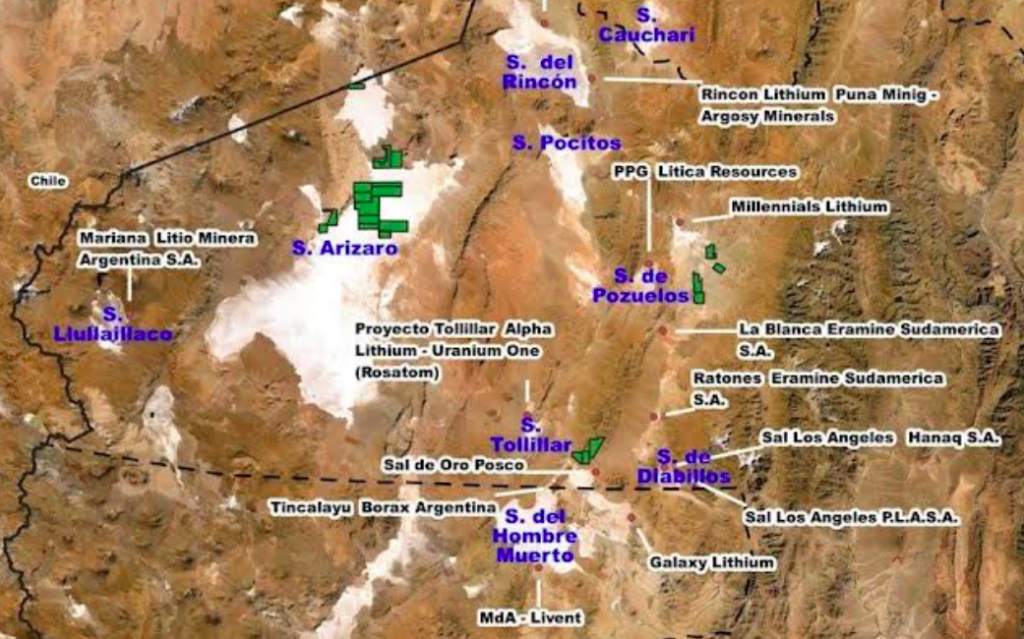 In recent articles, I’ve conveyed my view that the 100%-owned Yergo project could be worth $10’s of millions upon good drill results — increasing over time as the project progresses through a maiden mineral resource estimate & possibly a Preliminary Economic Assessment (PEA).

I pointed out that with Li carbonate prices so incredibly strong, currently ~US$80k/tonne (spot price in China), any project in Argentina not big enough to be a standalone mine, but reasonably near a producing operation, could have considerable value as a satellite deposit.

It’s not unusual for a brine deposit to host hundreds of thousands of tonnes LCE. The largest projects have up to 20M tonnes. If long-term Li carbonate prices are destined to be in the $20-$25k/tonne range, it seems to me that in-situ (in the ground) tonnes should be worth hundreds of dollars/tonne.

These new Salta properties have great potential as satellite deposits as they’re in the same province as producers Livent & Allkem (fka Orocobre). LAC & Gangeng’s world-class Caucharí-Olaroz project (in Jujuy, but near Salta) is going into production in 1H 2023.

In December Rio Tinto acquired the 11.8M tonne LCE development-stage (Pre-Feasibility Study-pending) Rincon project for $825M. Uranium One, (a subsidiary of Rosatom), invested $30m with $185M to follow in a few years to earn a 50% interest in Alpha Lithium’s Tolillar project. Argosy Minerals is starting small-scale production from evaporation ponds this year.

This news is a true vote of confidence in Portofino’s management team, including the Company’s Argentinan team & its contacts in Catamarca & Salta provinces. As can be seen from the names mentioned above, REMSa could have chosen to partner with many publicly-listed Li juniors but instead chose Portofino.

All it takes is one good property with blue-sky potential for a Chinese company to swoop in. Zijin Mining acquired Neo Lithium’s world-class project, Ganfeng is active in-country and is making corporate-level investments, CATL was outbid for a Li project but is looking for new opportunities.

Stainless Steel giant Tsingshan invested $375M into Eramet’s project, and Chengxin Lithium is talking with Lithium Chile about its project in Salta. If not the Chinese, Japanese trading houses like Mitsui & Co & Itochu… Not to mention EV & Li-ion battery makers from around the globe.

In looking at large & small players in Salta, there’s a real chance that the most popular salars like Hombre Muerto could end up with too many operators trying to tap the same sponge.

Will there be enough brine to run through evaporation pools and/or DLE plants? Will pump rates hold up as planned? Will local communities be okay with 2 or 3 companies but upset with twice as many?

Again, the answer to those potential problems would be to exploit nearby deposits which would require capital to mobilize concentrated brine by truck or pipeline to third-party processing plants, but would not be taking brine from congested salars, a win-win for communities & companies.

Bottom line — of the eight Li juniors with assets in Salta province, Argentina, Portofino Resources (TSX-V: POR) / (OTCQB: PFFOF) has the lowest enterprise value of them all. Moreover, there are at least six others with projects in Catamarca or Jujuy provinces — they too have higher valuations. Unlike most of its peers, Portofino has promising gold & Li properties in Ontario, Canada.

Not only is Portofino one of the very cheapest ways among N. American-listed juniors to play the Li theme, it also has more blue-sky potential than most. Drilling at Yergo should start next month. There are many reasons to take a closer look at this Company sooner rather than later.

Disclosures / Disclaimers: The content of this article is for information only. Readers fully understand and agree that nothing contained herein, written by Peter Epstein of Epstein Research [ER], (together, [ER]) about Portofino Resources, including but not limited to, commentary, opinions, views, assumptions, reported facts, calculations, etc. is to be considered implicit or explicit investment advice. Nothing contained herein is a recommendation or solicitation to buy or sell any security. [ER] is not responsible under any circumstances for investment actions taken by the reader. [ER] has never been, and is not currently, a registered or licensed financial advisor or broker/dealer, investment advisor, stockbroker, trader, money manager, compliance or legal officer, and does not perform market-making activities. [ER] is not directly employed by any company, group, organization, party or person. The shares of Portofino Resources are highly speculative, not suitable for all investors. Readers understand and agree that investments in small-cap stocks can result in a 100% loss of invested funds. It is assumed and agreed upon by readers that they will consult with their own licensed or registered financial advisors before making any investment decisions.

At the time this article was posted, Portofino Resources is an advertiser on [ER] and Peter Epstein owned shares in the Company.

Readers understand and agree that they must conduct their own due diligence above and beyond reading this article. While the author believes he’s diligent in screening out companies that, for any reasons whatsoever, are unattractive investment opportunities, he cannot guarantee that his efforts will (or have been) successful. [ER] is not responsible for any perceived, or actual, errors including, but not limited to, commentary, opinions, views, assumptions, reported facts & financial calculations, or for the completeness of this article or future content. [ER] is not expected or required to subsequently follow or cover events & news, or write about any particular company or topic. [ER] is not an expert in any company, industry sector or investment topic.