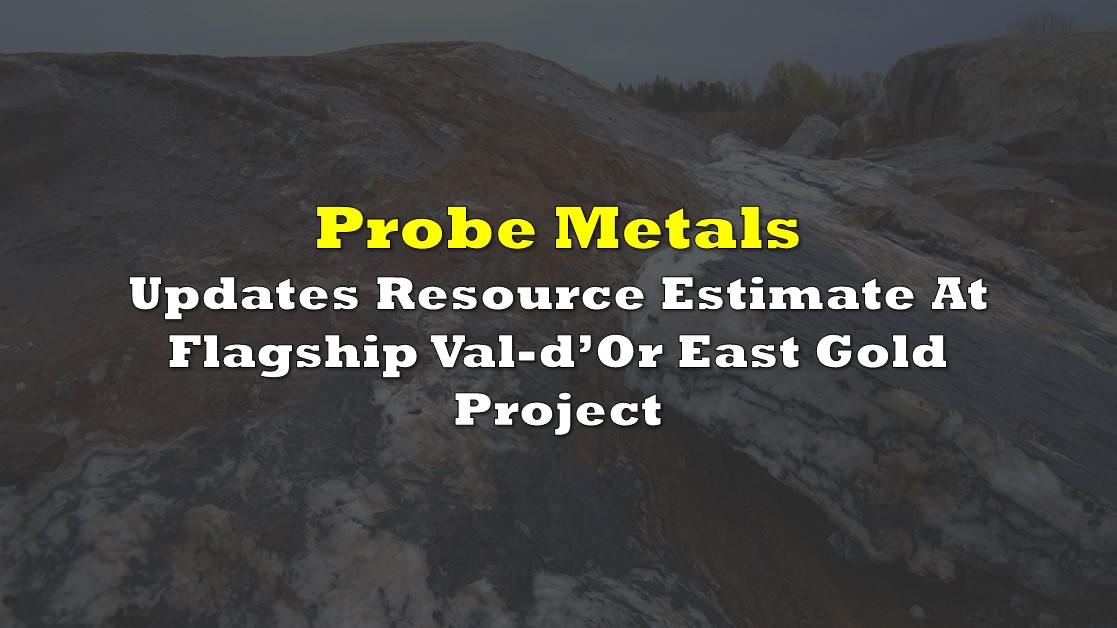 The June 1 resource estimate represents a 16% overall increase from the previous 2019 mineral resource estimate (870,000 and 2.56 million ounces of gold on M&I and inferred bases, respectively). Probe’s completion of nearly 75,000 meters of drilling between 2019 and now accounts for both the increase in total resources and the conversion of 907,200 ounces in the inferred category in 2019 to the M&I category today.

The 436 square-kilometer Val-d’Or East project is in the prolific Abitibi Greenstone Belt. Since 1901, more than 200 million ounces of gold, 400 million ounces of silver, and 35 billion and 15 billion pounds of zinc and copper, respectively, have been produced in this region.

Three past-producing mines (Beliveau Mine, Monique Mine and Bussiere Mine) are located on Val-d’Or East. In addition, 14 kilometers (km) of the Cadillac Fault’s 320-km strike length bisects the property. The Cadillac Fault is a major, mineral-rich geological structure in Quebec.

As of March 31, 2021, Probe had cash and marketable securities of about $33 million and negligible debt. The company’s operating cash flow shortfall has averaged about $3.5 million per quarter over the last five reported quarters, so Probe’s cash and cash equivalents equate to about 9-10 quarters of its current quarterly cash burn rate.

Probe has a potentially significant resource in Val-d’Or East, but the company is unlikely to begin production there for some time. In addition, if Probe’s quarterly operating spending were to increase noticeably from current levels, it could in time have to raise equity through a public or private offering.

Probe’s Val d’Or East project has a large gold resource and is located in a region characterized by large gold mines. Furthermore, the company is well capitalized with more than $30 million of cash and little debt. As Probe’s flagship project moves closer to production, investors may begin to ascribe a higher valuation to its shares.