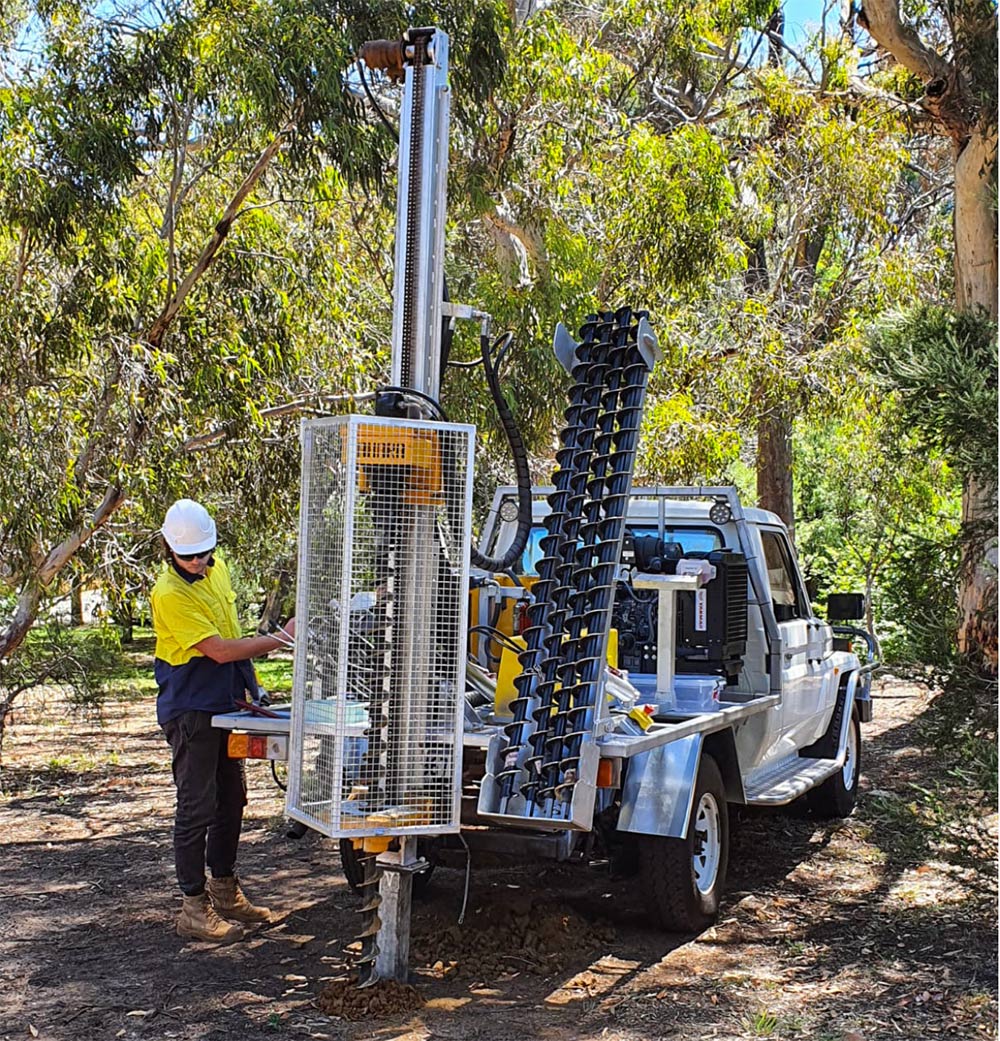 Earlier this week we said KGD was “mostly a kaolin explorer, with some gold on the side” which, as it turns out, isn’t entirely true – there’s also a lithium appetiser.

‘Augur’ drilling has now defined a +1.5km-long lithium cluster which coincides with a magnetic feature at the ‘Rankin Dome’ project in WA.

Augur drilling is cheap, fast but shallow (up to 25m deep), and is used in early-stage geochemistry reconnaissance work. Kula’s rig looks like this:

“Follow up auger geochemistry sampling has now been completed by the same Sahara rig as used in the initial program,” it says.

“Other areas of the tenement have also been tested, including for gold, which were under crop at the time of the initial drilling.”

TSX-ASX listed BNZ has stumbled upon a high-grade lithium outcrop at its ‘Ruby Hill West’ (RHW) prospect, part of the ‘Eastmain’ gold project in Quebec, Canada.

Rock chip sampling returned up to 1.9% lithium (anything ~1% and above is ore grade) across a 100m by 40m outcrop, which remains ‘open’ in all directions.

“Importantly, the lithium pegmatite at RHW is hosted in the greenstones, near the contact with younger felsic plutonic rocks which are most likely to be the source of the pegmatite fluids,” he says.

“This is a geological setting shared by many lithium pegmatite deposits such as Pilgangoora or Kathleen Valley in Western Australia.

“At Ruby Hill West, Benz controls over 35 strike kilometres of such a contact – an incredibly large area which presents a significant opportunity for Benz.

“I keep repeating myself saying how little exploration the Upper Eastmain greenstone belt has seen – this is essentially virgin ground for discoveries.”

BNZ will be drilling this pegmatite occurrence as soon as the weather allows — probs towards the end of March, early April.

The ~$66m market cap stock is flat year-to-date. It had CAD$13m in the bank at the end of October.

In late Jan, the diversified explorer identified several lithium targets at the ‘Ragged Range’ project in the Pilbara – the hard rock lithium capital of the world.

“These new targets will be advanced as soon as possible and have the potential for significant exploration discoveries, while we continue drill testing further gold exploration targets at the [nearby] Sterling Prospect,” she says.

THR says permitting is progressing well at the ‘Wedding Bell’ uranium project in the US “and we hope to update the market in the coming weeks”.

Assay results from recently completed drilling at the ‘Molyhil’ critical minerals project in the Northern Territory are also pending.

CML holds a 40% interest in unlisted explorer Red Fox Resources, which has defined a 700m long gold-in-soil anomaly – which includes rock chip samples up to 3.86g/t gold — at the ‘Butchers Bore’ project in Queensland.

“This field program was of a preliminary nature and has highlighted the gold and copper potential of the area,” Red Fox says.

“The work has covered approximately 20% of the gold anomalous catchment defining the area.”

Red Fox plans to follow up these encouraging results with further mapping “as soon as practical” after the wet season.

Yesterday, CML – which has been on the hunt for new projects — announced it had identified of a new rare earths metals target area in the NT.

“CML has examined the large volume of data and has identified this area as having the strongest indicators of a major rare earths deposit,” it says.

“The project area is characterised by a lack of outcrop, and strong weathering, features which are conducive to rare earths enrichments in the near surface.”

After the exploration licenses are granted CML will conduct more detailed sampling. Drilling will take place “after the targets are well defined”.

Priority targets have been identified for immediate follow-up with field checking and additional detailed geophysical and geochemical surveys “to commence as soon as feasible”, ENX said January 31.