Grande Portage Resources, recipient of a $3 million investment by Eric Sprott, is in the midst of a 6,000-meter summer drill program at its Herbert Gold Project.

Grande Portage Resources Ltd. (GPG:TSX.V; GPTRF:OTCQB; GPB:FSE) is focused on expanding its Herbert Gold Project in southeastern Alaska, located not far from the capital city of Juneau. The property sits in the 160-km-long Juneau gold belt and is flanked by some productive neighbors. The A-J Gold Mine in Juneau operated from 1917 to 1944 and was one of the world’s largest gold mines at the time. The Kensington Mine, to the north, is operated by Coeur Mining, and produced nearly 128,000 ounces of gold in 2019. 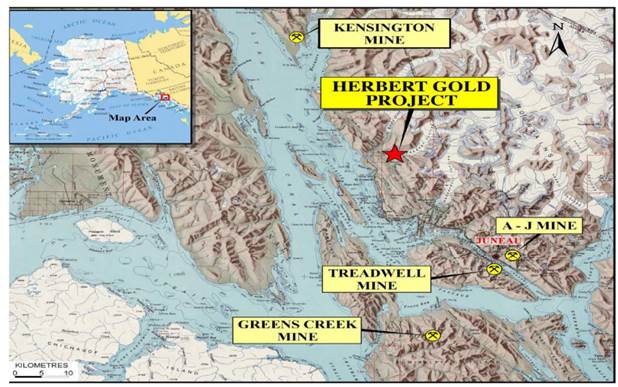 The company’s goal is to expand that resource. To that end, Grande Portage raised CA$3.15 million through a fully subscribed private placement that closed in July. Veteran investor Eric Sprott purchased 10 million common shares and 5 million warrants, giving him 12.8% ownership on a non-diluted basis.

Cash in hand, Grande Portage has literally doubled its efforts for this summer’s drill program by adding a second diamond drill rig and plans to drill until early October.

The days are long in the Alaska summer, and Grande Portage is making the most of it. “We drill from early summer to early fall, where we can get a lot of our drilling pattern in over four to five months,” Grande Portage President Ian Klassen told Streetwise Reports. “Then we spend the rest of the year doing assessments and recording what we’ve achieved there.”

The Herbert project contains a series of at least five parallel gold-hosting mesothermal veins, with some high-grade numbers already in hand. Past drilling intersected values as high as 59.91 g/t gold over 8.08 meters and 37.07 g/t gold over 15.7 meters. 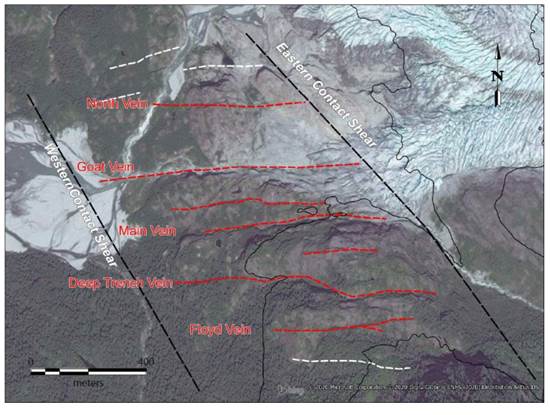 Geologist Dave Webb likens the structure to sandwiching a piece of glass between two pieces of clay and then squishing the clay. “The clay will spread out and flow around, but the glass will tend to crack in a very predictable, parallel system. And that’s what we have with the quartz diorite being that rigid block of rock that is cracking, so you end up with veins that are like vertical blinds. They’re very predictable, spaced about every 200 meters apart, and they seem to have the same size and dimension and, to date, gold.”

The veins outcrop at surface because the soft, altered rock around them tends to weather away, Webb said. “It was quite outstanding when the LiDAR survey was completed, these vein structures just jump off the map. They’re gold highways really.” 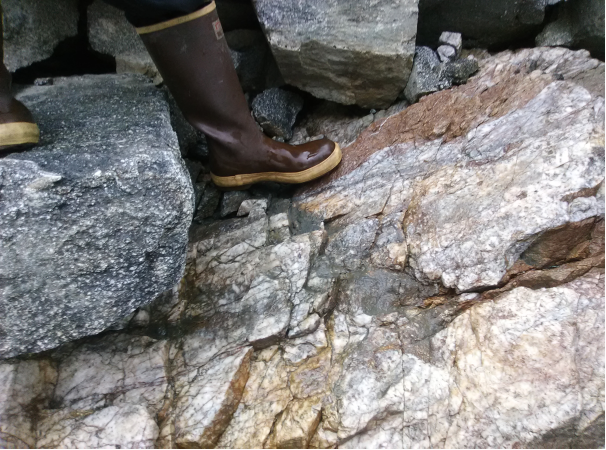 Exposed quartz on the Goat Vein

This summer’s program will drill up to 6,000 meters to expand mineralization on multiple veins, as well as follow up on prospective targets to the south that the 2018 LiDAR survey revealed.

“This year we will mainly concentrate drilling on the Goat Vein, the Main Vein and the Deep Trench Vein because they’re the most prolific veins and they make up the resource that we’ve got right now,” Klassen said. “We’re concentrating further to the east than ever before and at greater depths than before.”

The veins “average out around 4.5 feet, but we have intersected some really nice wide veins of up to 45 feet of better than an ounce,” Webb noted. “The veins are expected to keep going to great depths and will really be limited by technology more than anything else.” 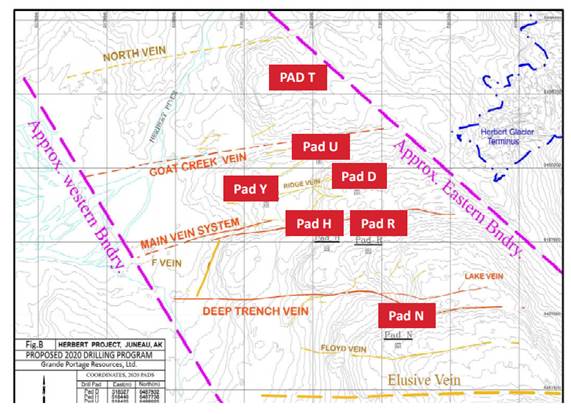 While the company has not yet released drill results from this year’s program—COVID-related issues have slowed down lab turnaround times—Grande Portage noted that it has discovered two new veins hosting visible gold. They are located between the Goat and Main veins, to the east of previous drilling. 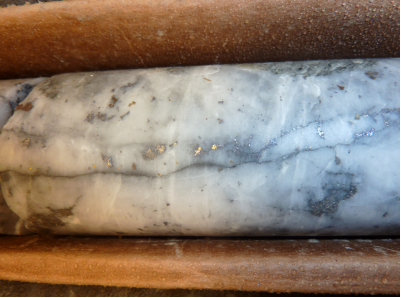 “We’ve encountered what looks like two newly found vein structures between the Goat and the Main that we didn’t expect there,” Klassen said.

The company also is drilling on the North Vein, and on the Floyd and the Elusive veins to the south. “In its totality, we could be working on a total of six veins during this drill program,” Klassen said.

“We’re fully funded with a treasury that enables us to do the work that we need to do—that we’ve always wanted to do—with two rigs we’ll have some results out for our shareholders shortly,” Klassen concluded.

Grande Portage has around 78 million shares issued and outstanding, and about 5.6 million options and 19.8 million warrants. It has about $3.8 million in the treasury.

Grande Portage is followed by industry analysts. Resource Maven Gwen Preston wrote on August 26, “The investment thesis for GPG had three planks. First, the market had forgotten about Herbert, which is a high-grade vein system well suited to this market. That advantage has already played out, with Eric Sprott’s investment shining a light on this asset. The other two planks are that the known veins can likely be extended and odds are good that more veins can yet to be found. These results support both of those ideas.”

Eric Coffin wrote in HRA Hard Rock Analyst on August 20, “Today’s news [visible gold in two holes] nicely fits the investment thesis here, that more drilling was bound to find more veins, in addition to extending the known ones. It looks like the Herbert resource is highly likely to grow again once the 2020 drill results are added to the mix and the notes on visible gold increase the odds we get the sort of high grades that increase the attention on the stock, and the share price.”

Disclosures from Resource Maven
Companies are selected based solely on merit; fees are not paid.

The publisher, owner, writer or their affiliates may own securities of or may have participated in the financings of some or all of the companies mentioned in this publication.

Disclosures from HRA Special Delivery Alert
We do not receive or request compensation in any form in order to feature companies in this publication. We may, or we may not, own securities of the companies mentioned herein.