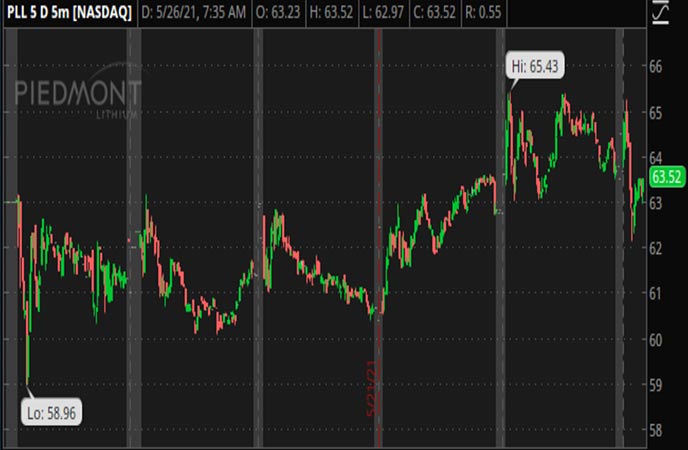 Which lithium stocks are pulling ahead before next month? 3 to watch

The role that lithium plays in electric vehicles is essential. Most EVs use lithium-ion battery technology. There does not seem to be a replacement for the batteries any time soon either. This means that as EV demand rises, the demand for lithium does in tandem. Some believe that all cars will be replaced by electric vehicles someday. Companies like Audi have stated that they want their entire vehicle lineup electric in the next decade.

Often when an EV company like Tesla has a big stock uptick, it can affect the lithium stocks that have contracts or are associated with the company. This material isn’t just used in EVs though, many electronics also use lithium. This means that even if some EVs started using other battery technology, lithium will still be a necessary element. Some lithium stocks are not near their record high right now. It seems like the demand for lithium is continuously moving upwards resulting in share price increases. With all of this information in mind, let’s take a look at three lithium stocks that have potential in the market.

When talking about lithium stocks, Piedmont Lithium Inc. is often mentioned. Piedmont explores and develops resource projects in the United States. Currently it has a 100% interest in the Piedmont Lithium Project that covers more than 2,126 acres in North Carolina. It also possesses a 61 acre property in Kings Mountain, North Carolina for similar exploration purposes. So what has this lithium stock been up to recently that may be affecting its price?

On May 18th the company announced that all of its Piedmont Australia shares have been transferred to Piedmont. This is because of the scheme of arrangement giving effect to the re-domiciliation of Piedmont Lithium Limited from Australia to the U.S.A.

The company also released its quarterly report on April 30th. President and CEO Keith D. Phillips said, “This was an eventful quarter, as we positioned Piedmont to be the United States’ first greenfield lithium project in over 50 years. We announced a meaningful increase to our mineral resources, launched an integrated definitive feasibility study, and raised $122 million through a highly successful US equity placement.”

Piedmont also made strategic investments, such as one in Sayona Mining. One year ago PLL stock was worth a little over $8 per share. Now in May 2021 PLL stock price is at over $64 per share. The rapid growth of this lithium stock shows the potential that this sector has to strive. With this in mind, will Piedmont make it on to your lithium stock watchlist?

Livent Corporation is a manufacturing business that makes and sells lithium batteries. The company also sells polymer and chemical synthesis applications as well. It operates in North America, Latin America, Europe, Middle East, Africa, and the Asia Pacific. Livent offers lithium compounds for use in applications like lithium hydroxide for potteries as well. Now let’s take a look at what things are impacting the stock price of Livent Corporation.

It can be assumed that higher demand for lithium is the main source of Livent’s gains. But not looking at its first quarter 2021 results could be a step in the wrong direction. The company reported higher volumes and lower costs. It also stated that it expects its performance this year to be on the higher end of its guidance ranges. Its revenue grew 12% quarter over quarter, and its adjusted EBITDA was 98% higher quarter over quarter.

President and CEO Paul Graves said, “We are becoming increasingly confident in the trajectory of lithium demand growth over the coming years behind the increasing support for electrification from OEMs, governments and consumers alike. At Livent, we are focused on executing on our expansion plans as we continue to build upon our low cost and sustainable operations, and our position as a partner of choice to leading auto OEM and battery producers.” With this positive outlook on LTHM, will you add it to your list of lithium stocks to watch?

Another notable lithium stock to watch, Albemarle Corporation, has been performing well in the market. Ablemarle is a chemical company that develops, manufactures, and markets various products. It will sell Lithium, Bromine, and Catalysts primarily. Included in its sales are materials for lithium batteries for use in electric vehicles and electronics.

Albemarle has not released any company-specific news so its stock price is not moving dramatically in either direction. It is likely that this lithium stock is being driven by the price of lithium itself. With that being said, updates will come from Albemarle very soon. On Wednesday, June 2nd, the company will release its 2020 sustainability report. This is possible when the next more significant price movement can be expected from ALB stock. Will Albemarle make it onto your list of lithium stocks to watch?

How To Invest In Lithium Stocks