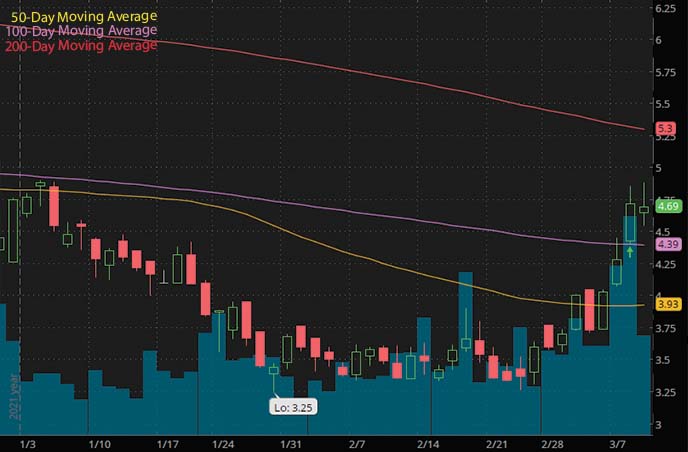 One of the ways traders find penny stocks for their list is “following” the money. This type of strategy involves seeking out companies where insiders and institutions are purchasing shares. Today we’ll look a bit more closely at a handful of penny stocks to buy right now, according to these insiders. We look at who’s doing the buying and how much they purchased. Then you can decide if “following the money” is something to add to your strategy or not.

Penny Stocks To Buy According To Insiders

Are the best penny stocks to buy the same ones that insiders are scooping up right now? That is a complicated answer, and a lot depends on the specific details of the trades. For example, if an insider purchases $1 million worth of shares, most would assume that to be a significant buy. But if the insider conducted the trade through a multi-billion dollar fund, the $1 million might be spent the same way an average day trader buys $1,000 worth of stock.

Similarly, insiders will also participate in scheduled trades – usually through rule 10b5 – which outlines a buying or selling plan without personal intervention. You’ll see people like Jeff Bezos and Mark Zuckerberg selling shares of Meta or Amazon this way.

It doesn’t necessarily mean they’re bearish on a trade, but rather, they’ve laid out a profit-taking strategy that is absent of market conditions influencing the decision. Keep all of these things in mind when looking at insider transactions, and it helps to read any relevant footnotes.

Shares of Perpetua Resources have been steadily moving higher over the last few weeks. Albeit on lower volume, PPTA stock has now jumped nearly 50% since February 24th. Since the company focuses on metals and mining, there’s been some evident attention on related names.

Recent achievements made by the company have placed an even brighter spotlight on its plans for 2022. These plans include a focus on responsible mining and ESG initiatives. Its Stibnite Gold Project specifically targets gold-antimony-silver deposits and has cited it as one of the highest-grade, open-pit gold deposits in the U.S. What’s more, Perpetua has also discussed supplying a U.S.-based battery company, Ambri, with a portion of its antimony production. Ambri is commercializing low-cost liquid metal batteries to contribute to the low-carbon energy transition directly.

Chris Robinson, Director at Perpetua, is the latest insider to grab shares of the company. Earlier this month, Robinson purchased 7,000 shares of PPTA stock at an average price of $3.80.

Another lower volume penny stock, Comscore, has also enjoyed a strong move higher over the last few weeks. SCOR stock made a new high for March as a string of headlines helped give things a boost. Comscore is a media evaluation company giving insight to media buyers and sellers who can then use the data to make decisions on advertising.

The company has been working on multiple partnership deals to extend its reach. This week, WideOrbit & Comscore expanded their partnership for automated TV buying and selling at scale. The agreement allows advertising inventory to be traded from more than 1,700 local television stations in 210 markets.

Bill Livek, the Comscore CEO, is the latest insider to grab shares of SCOR stock. Livek bought on three separate days between March 3rd and the 7th with 400,000 shares. Average prices ranged from $2.54 to $2.67,

While Comscore’s CEO purchase was a significant dollar figure, Archer Aviation may have just set the record for this list of penny stocks. Archer is likely a familiar face to some of our readers. We discussed this company as one of the Cathie Wood penny stocks to watch earlier this year. At the time, we highlighted Wood’s Autonomous Tech & Robotics ETF as the home for roughly 8.3 million shares of ACHR stock. Today, that figure sits around 8.1 million, according to the ARKQ list of stocks & holdings for March 9.

The company had been under pressure during a court process involving patent infringement and trade secret accusations made by Wisk. The vertical take-off electric aircraft company has denied the allegations. Earlier this year, the U.S. Attorney’s Office decided not to bring charges against its employee or continue its investigation. In light of these events, the market seems to have reacted cautiously optimistic as shares reached some of their highest levels since January.

March could be a pivotal month for the company as Archer will deliver Q4 and full-year 2021 results next week. Ahead of these results, insiders have bought shares of ACHR stock.

High profile investor, founder of Jet.com, and former president & CEO of Walmart eCommerce U.S. Marc Lore has become the lead investor in the flying car company. This month Lore added to his growing position in ACHR stock. From March 1st to the 3rd, he picked up just over 315,000 shares at average prices between $2.9791 and $3.116. The latest Form 4 filing shows another round of purchases between March 4th and the 8th totaling roughly 746,000 shares. Average prices for those purchases ranged from $2.9458 and $3.1575.

As the stock market crash continued in early March, some sectors have already begun weathering the storm. Healthcare has come up as one of these niches, with benchmark ETFs like the S&P Healthcare ETF making higher lows during the latest consolidation period. Companies like Bright Health Group have also begun picking up steam.

Following some lackluster earnings, BHG stock began rebounding this month. The company explained that even with a challenging year in 2021, Bright has high hopes for the year ahead. In particular, it looks to play off of last year’s growth after recording $4 billion in revenue and serving over 1 million health plan lives to start 2022. Echoing this optimism was insider buying this week.

Director Manny Kadre is the latest to buy shares of BHG stock. Kadre purchased a total of 200,000 shares at average prices ranging from $2.09 to $2.10, with transactions made on March 4th.

When insiders make moves, the market takes notice. It’s important to remember that just because they’re buying, stocks don’t always rise, nor when they’re selling, stocks don’t always drop. At the very least, tracking the money flow of insiders can help gauge what company representatives think about the state of their business. Based on the details from today, are these the best penny stocks to buy now, or is more research warranted?

The post Best Penny Stocks To Buy For March According To Insiders appeared first on Penny Stocks to Buy, Picks, News and Information | PennyStocks.com.