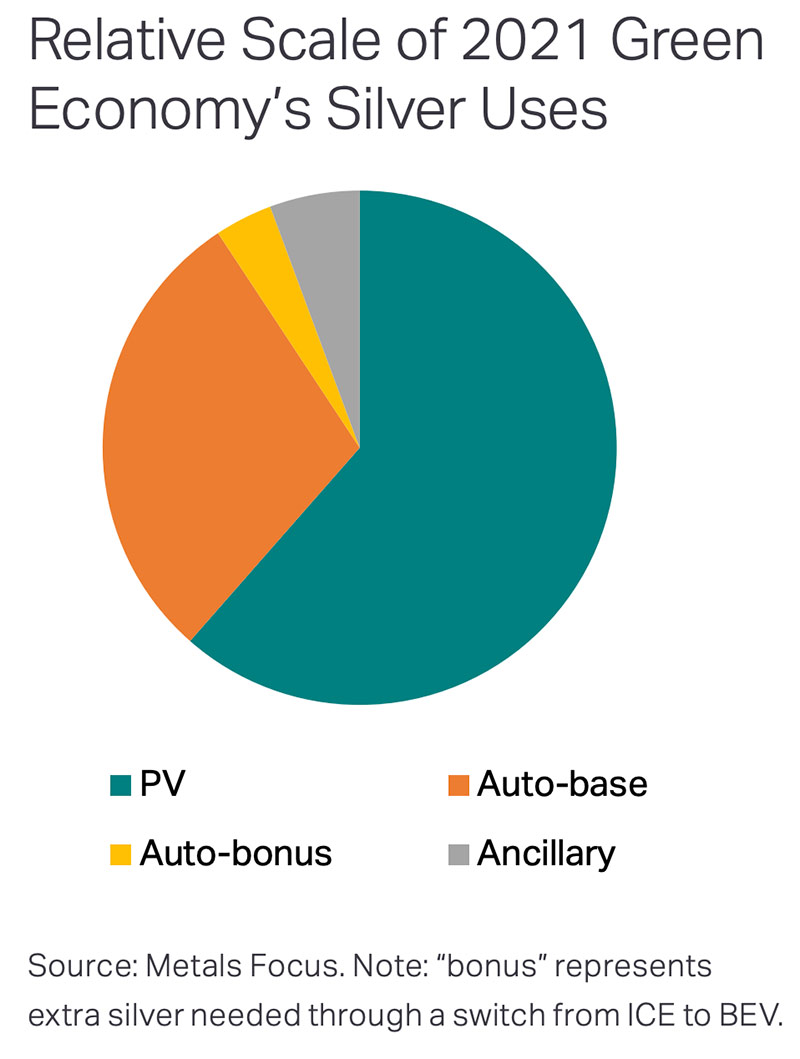 Global silver demand hit ~1.02 billion ounces in 2021, the first time it has breached 1 billion since 2015, according to the Silver Institute.

Of that, industrial demand hit a new high of 524 million ounces.

And of that, photovoltaic (solar panel) demand rose by ~13% to over 110Moz — a new high which highlights silver’s vital role in the green economy.

Uniquely for the four main precious metals, silver saw a deficit last year and is forecast to remain in deficit this year, when the gap between supply (1.09 billion ounces) and demand (1.128 billion ounces) is expected to widen further.

“The fact that green demand is forecast to grow strongly in the next few years only adds to trends in other supply and demand segments,” Metals Focus says.

“As a result, the deficit is expected to grow in the coming years … [and] has a strong likelihood of becoming structural.”

Silver and Solar: Making hay while the sun shines The star of silver use in the green economy over the last decade has been photovoltaics (PV), Metals Focus says.

There is no sign of this importance slackening either.

“We initially expected that this would all translate into slight growth in silver use in 2022 but we have recently seen forecasts suggesting much higher installations, perhaps as much as 200GW,” Metals Focus says.

“Thereafter however, end-use could plateau as ongoing thrifting counters still high installation figures plus the bonus from the replacement of end-of-life cells (those installed before say 2010).”

Silver and Automobiles: Hitting the accelerator While silver demand in PV might start to plateau, the opposite is true for silver use in the automotive industry, Metals Focus says.

As shown in the chart above, much will stem from the recovery in vehicle production as the chip crisis eases, but total silver use is forecast to rise at a much stronger pace than mere vehicle numbers.

This is partly due to the growing adoption of things like complex infotainment systems but mostly due to the rise of EVs, which use a lot more silver than their ICE counterparts.

“These areas include the two electrodes per battery (of which there can be thousands) and the powertrain’s wiring.”

“The latter needs silver (typically in a 70:30 copper-silver mix) because of the high voltages involved.”

Current estimates point to PV being roughly twice the size of automotive. That could change very soon, Metals Focus says.

“This relative importance will rapidly change in the next few years as PV plateaus and as BEVs numbers surge; it would not surprise therefore if this BEV “bonus” reaches 20% in a few years and that total automotive use becomes similar in scale to PV demand.”

Gold has held steady near US$1,820 and silver at $US23/oz following the latest round of US inflation data, with large cap ASX gold stocks performing well over the last few sessions.

Both have a gained a bit over 1% year-to-date.

“Gold’s best environment in the short-term might be if risk appetite remains strong, but risks to the outlook continue to grow.”