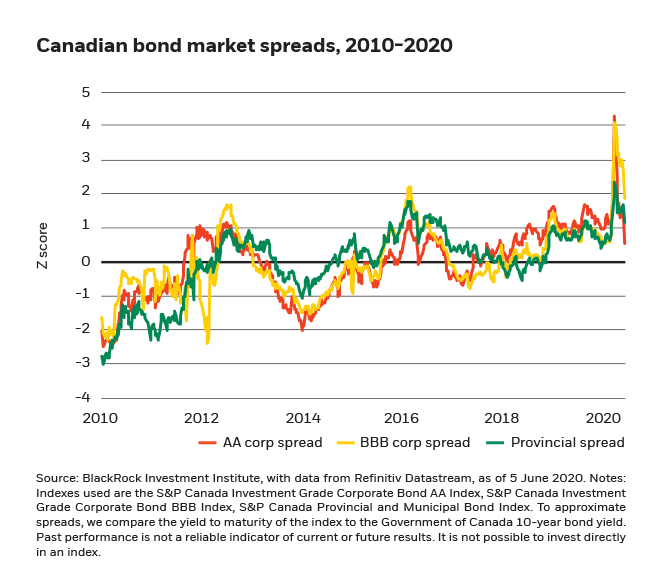 Last Friday’s labour market report from Statistics Canada forced a double take. In May, the Canadian economy added 290K jobs, versus an expected further decline of 500K, and hours worked rose by 6.3% on a month-over-month basis. Together, these gains represent a 10% recovery of lost jobs and reduced hours since the pandemic lockdowns began. The unemployment rate edged up to a record high of 13.7%, though this was because more Canadians were actively searching for work – an encouraging sign. While the labour market is still feeling the pain from the initial shock as many workers remain underutilized, last month’s improvement moved forward the expected eventual recovery.

At its policy meeting last week, the Bank of Canada (BoC) also stated it believes the worst of the economic shutdown measures are now in the rearview mirror, even as it cautions that Canadian GDP could fall another 10-20% in the second quarter, with activity improving thereafter. As widely anticipated, the BoC held the overnight rate steady and announced no changes to its large-scale asset purchase program. That said, the Bank scaled back its open-market operations aimed at boosting financial market liquidity as conditions had already started to improve (see chart below).

Encouraging economic data releases and a more constructive tone from policymakers coincides with continued Canadian equity market strength and a recent pivot into cyclical, value-oriented stocks (see chart below). As of last Friday, the S&P/TSX Composite Index (TSX) had risen more than 40% since troughing on March 23 and is merely 13% below its pre-Covid-19 high. While the equity market’s undeterred climb isn’t exactly news, notable changes have occurred underneath the hood. Tech and materials (gold) stocks, which led the first leg of the TSX’s move higher, gave way to financials, consumer discretionary, and energy stocks over the past two weeks. Similarly, value stocks, which tend to have higher operating leverage, have outperformed amid hopes that economic growth and earnings have hit an inflection point. 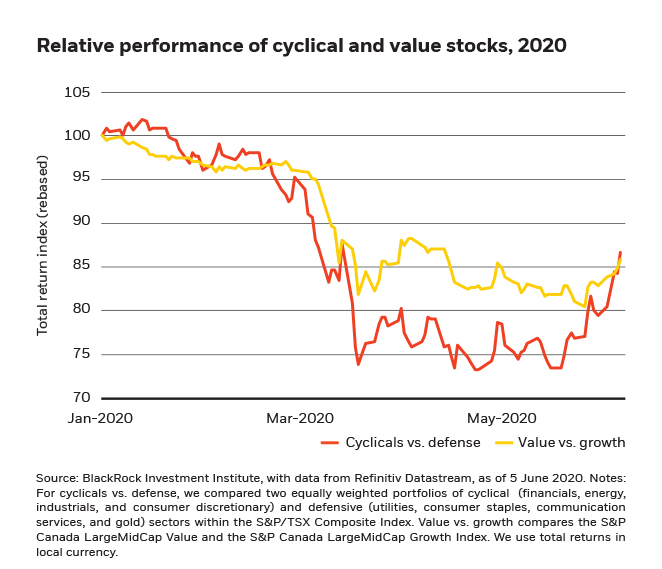 This rotation in the TSX wasn’t principally a function of the better-than-expected turn of events in Canada but rather the outright positive developments overseas that made the most difference. The revival in Canadian energy shares and oil prices received another lifeline over the weekend on expectations that oil ministers from OPEC, as well as other producers led by Russia, would extend production cuts through July in the aftermath of the pandemic-driven demand shock and price decline. Expectations for broader fiscal stimulus in Europe, China and Japan last week as their economies reopened also helped to put a downside floor under economic expectations even as concerns mount over the risks of a second wave. In fact, Canadian stocks might have moved even higher were it not for the setback in the materials sector owing to weaker gold prices as risk appetites recovered (see chart below). 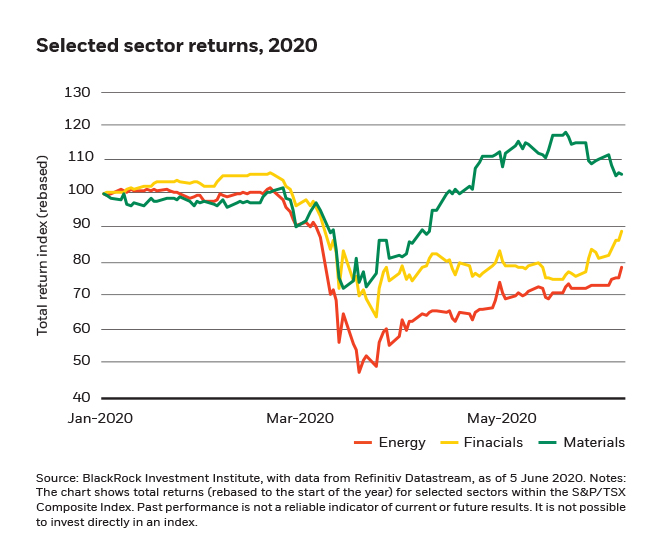 Have stock markets climbed too far, too fast? One could argue that revolutionary policy stimulus has provided a floor for the economy, that indicators have shown preliminary signs of stabilization, and that record low interest rates justify higher stock market valuations. But stocks are no longer definitively cheap, with cyclical sectors also becoming relatively more expensive in recent weeks. Furthermore, equity markets appear susceptible to a slower-than-expected reopening, especially if earnings don’t rebound in a V-shaped pattern as is currently anticipated in next year’ profit forecasts for the TSX. We therefore prefer the risk-adjusted performance profile of global corporate credit over stocks for the higher income potential and seniority in the capital structure.

Kurt Reiman is a Managing Director and BlackRock’s Chief Investment Strategist for Canada. Kurt is a regular contributor to The Blog in Canada.

Daniel Donato is an Associate within BlackRock’s Toronto office.

This material is not intended to be relied upon as a forecast, research or investment advice, and is not a recommendation, offer or solicitation to buy or sell any securities or to adopt any investment strategy. The opinions expressed are as of the date indicated and may change as subsequent conditions vary. The information and opinions contained in this post are derived from proprietary and nonproprietary sources deemed by BlackRock to be reliable, are not necessarily all-inclusive and are not guaranteed as to accuracy. As such, no warranty of accuracy or reliability is given and no responsibility arising in any other way for errors and omissions (including responsibility to any person by reason of negligence) is accepted by BlackRock, its officers, employees or agents. This post may contain “forward-looking” information that is not purely historical in nature. Such information may include, among other things, projections and forecasts. There is no guarantee that any of these views will come to pass. Reliance upon information in this post is at the sole discretion of the reader.

© 2020 BlackRock Asset Management Canada Limited. All rights reserved. iSHARES and BLACKROCK are registered trademarks of BlackRock, Inc., or its subsidiaries in the United States and elsewhere. Used with permission.