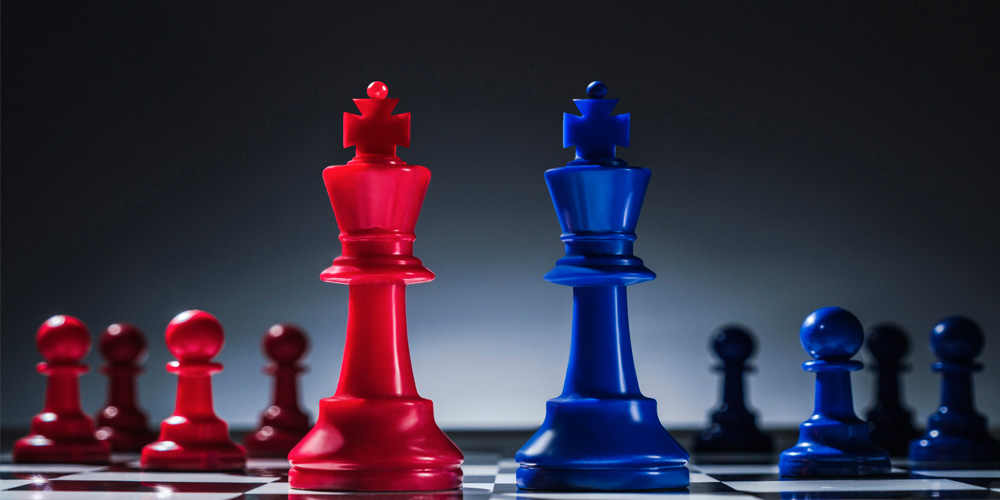 With fewer than 100 days until the U.S. presidential election, prediction markets currently give Joe Biden a 60% chance of winning. A Biden win could have implications for policy—including taxes, spending, and healthcare—but only if the Democrats also take control of the Senate.

Given that U.S. presidential elections are not really national elections determined by popular vote but actually decided in a more localized state-by-state battle format, we need to look at state-by-state polling information to get an understanding of where things currently stand.

In 2016, Donald Trump was able to thread the Electoral College needle by winning key battleground states, such as Pennsylvania, Michigan, and Florida, by razor-thin margins (“2016 Result” column in the chart below).

Final polling information (“2016 Final Polling” column) had those states fairly neck and neck, and the final results were within the margin of error.

But so far, polling information for the 2020 election shows those states firmly in Biden’s camp, and Trump cannot win the election without these states. Additionally, states where Republicans have typically had a stronghold, such as Texas, show Trump and Biden fairly even.

Given these state-by-state numbers, it makes sense that Biden is currently the favorite in the prediction markets. But the election is three months away and things can change.

The economic hit from the COVID-19 pandemic decreased Trump’s favorability and his probability of reelection, but economic improvement between now and Election Day could improve his odds.

The economic hit from the COVID-19 pandemic decreased Trump’s favorability and his probability of reelection, but economic improvement between now and Election Day could improve his odds. The debates, scheduled for September 29, October 15, and October 22, are also likely to have a material effect on these numbers.

And then there is the important issue of voter turnout. When candidates are winning a state by less than 1%, the one that can get voters to the polls when the other side cannot has a huge advantage. This dynamic absolutely played a role in 2016.

And now, with COVID-19, there is still uncertainty about how many people will vote in-person, how smooth the voting process will go, and the potential for mail-in ballots. These variables may have an impact on voter turnout this year more than any other in history.

The Trump Administration has been focused on international policy, such as immigration and trade. Biden’s platform, meanwhile, is focused more on domestic policy—taxes, spending, and healthcare.

The Trump Administration has been focused on international policy, such as immigration and trade. Biden’s platform, meanwhile, is focused more on domestic policy—taxes, spending, and healthcare.

This is notable because the executive branch has significant influence in international policy, but not as much autonomy when it comes to domestic policy, which requires Congressional support. That is one reason the Trump administration failed to repeal the Affordable Care Act—it had only a thin margin in the Senate and could not get enough votes.

When thinking about Biden’s influence, then, what matters is how much Congressional support he has. Democrats will most likely keep the House of Representatives, so what we are watching from this perspective is the Senate, where Republicans currently have a slight majority.

Of the total 100 Senate seats, 35 are up for election in this cycle, with the Republicans defending 23 seats to the Democrats’ 12. To get control of the Senate, Democrats need to win 16 of the 35 seats up for election.

To get there, they would need to win all of the races that are currently “Lean Democrat” (the left three columns below) and win four more seats from the “Toss-Up” column, which are currently held by Republicans (as the red color indicates). We will be closely monitoring the Senate races as we approach Election Day.

If Biden wins the election and the Democrats take the Senate, then we may actually see more of the Democratic policy changes enacted—taxes, spending, and healthcare being the primary areas of focus right now. But not all Democrats have the same progressive views as the rest of the party, so even a Senate majority may not lead to a lot of policy action.

Another potential implication if Biden wins is the likelihood that he will use international organizations and allies much more than the Trump administration, which has tended to go alone and even strong-arm U.S. allies. The Biden administration would be more likely to partner with the eurozone and Japan in applying pressure on China, for example.

This would affect our Asia game theater, where we believe the United States’ coalition power will most likely rise with a Biden win because Biden wants to work with international partners. But if Biden’s risk tolerance is lower than Trump’s, the United States’ total power may stay the same.

Currently, we do not have any exposures in the portfolio explicitly tied to a view on the U.S. election outcome. We will continue to monitor polling information at a state level and, importantly, will be closely following the Senate races.

From a market perspective, we tend to look for overreactions in the lead-up to the election or immediately following. We will especially be looking for an overreaction if Biden wins the presidency but the Senate remains in Republican control, which would drastically reduce his administration’s ability to quickly implement his policies.