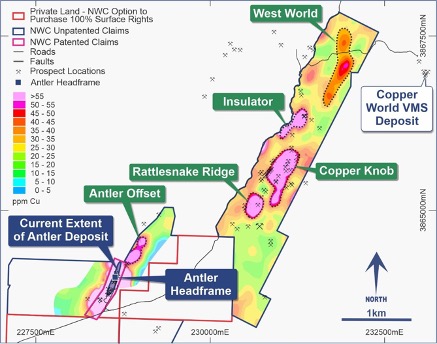 New World Resources is on the hunt for what could be a cluster of significant VMS style copper deposits around its Antler copper mine in Arizona.

A new induced polarisation ground geophysical survey has commenced at a host of high priority soil anomalies stretching for kilometres to the north of the Antler ore body.

New World (ASX:NWC) has already had success with this technique.

The identification of a strong IP anomaly to the south of the Antler deposit resulted in the discovery of the thick, very high grade South Shoot in late 2020, which now has a vertical extent of 700m and drill results including a ripping hit of 17.1m at 5.5% copper equivalent.

NWC is hoping to repeat the dose with IP surveying over the Antler Offset, Copper Knob, Rattlesnake Ridge and Insulator anomalies over the next two to three weeks, with priority drilling expected to commence in late 2022 on targets where IP and soil geochemistry results line up.

It could open the prospect of finding a cluster of high grade sulphides, bolstering the economic potential and scale of the Antler development.

Exploration at Antler itself is by no means winding down either, with two diamond core rigs still onsite testing for depth extensions at the deposit where some of the best results have come in its deepest holes.

“We are excited to commence a ground-based geophysical survey over the strong soil anomalies we delineated recently along strike from our very high-grade, and rapidly expanding, Antler Copper Deposit,” NWC managing director and CEO Mike Haynes said.

“We believe there is considerable potential to discover additional VMS deposits, like Antler, along strike.

“The IP survey is being undertaken to help expedite the discovery of thicker and/or higher-grade mineralisation associated with the soil anomalies.

“Initial drilling of these targets is scheduled to commence in late 2022 – with coincident IP and soil geochemistry anomalies to be prioritised for drilling.

“Because of the extraordinary success we continue to have with our drilling to test the depth extensions of the Antler Deposit itself, that will be the first drilling at the Project outside the 600m long corridor we have been continuously drilling since March 2020.”

NWC released a scoping study at Antler in July, with a PFS due in the first quarter of 2023.

The mine boasts an indicated and inferred resource of 7.7Mt at 3.9% copper equivalent, including 2.2% copper and 5.3% zinc, which is expected to deliver around US$2 billion in revenue over its initial 10-year mine life, producing around 30,600t of copper equivalent metals in concentrate per year.

The post Antler only the beginning for New World Resources as geophysical survey hunts new copper in Arizona appeared first on Stockhead. 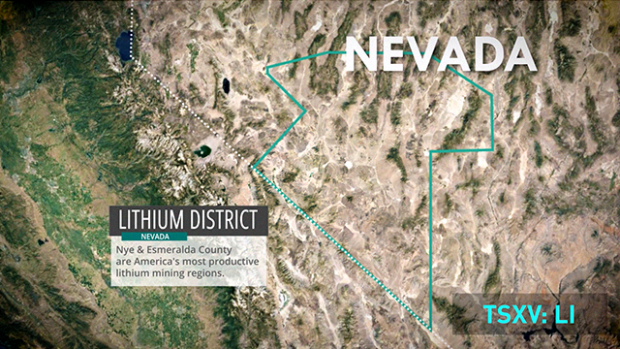