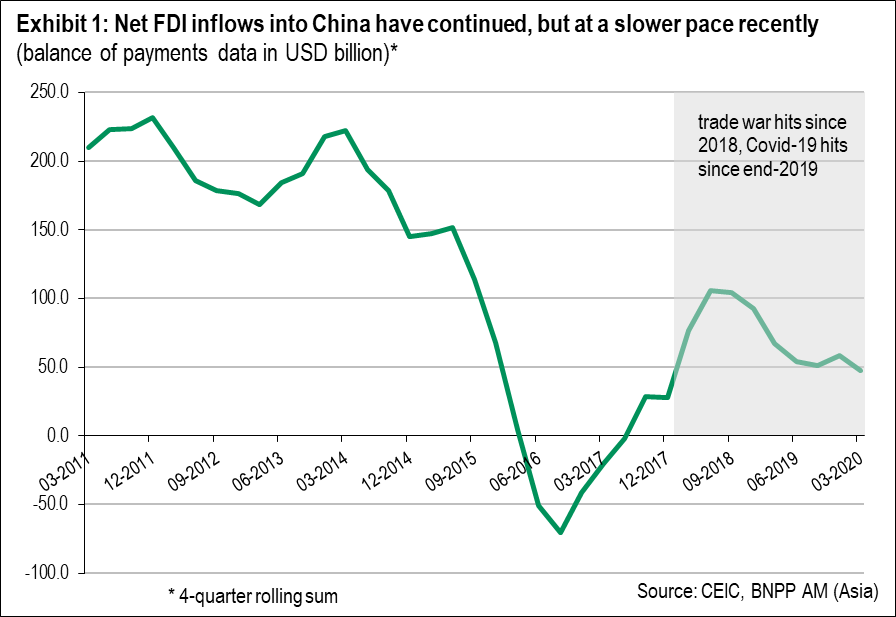 Investment has kept flowing into China from abroad. This is despite the recent escalation of Sino-US tensions and the pandemic that may have prompted many countries and international companies to consider cutting their exposure to China. Any decoupling from the world’s second-largest economy is likely to be a protracted process.

Beijing has been trying to juggle between fighting a trade war while maintaining China as a benign destination for foreign investment. So far, Beijing has refrained from retaliating against US trade war tactics and the continuation of inflows of foreign direct investment (FDI) appears to show that this balancing act is working.

Despite the US tariff battles and investment restrictions on China, China-US financial integration has deepened rather than being reversed. This has been a result of China accelerating financial liberalisation, prompted in part by US pressure.

Formerly, foreign financial firms in China were allowed only to operate joint ventures with minority ownership stakes. The liberalisation since 2019 has led to a sharp increase in the number of majority or wholly foreign-owned financial institutions. They include large US firms such as PayPal, Goldman Sachs, JP Morgan, American Express, Fitch Ratings and S&P Global.[2]

Meanwhile, China has been integrated further into the global financial markets: foreign portfolio inflows into onshore stocks and bonds have risen sharply. Inflows have not abated (although equity inflows are more volatile than bond inflows) despite the trade war and the pandemic. They are set to grow as Chinese assets are added to international benchmarks, prompting global investors to increase the weighting of these assets in their portfolios.

Nevertheless, the risks of a prolonged Sino-US trade war and the pandemic have prompted countries and companies to consider moving supply chains away from China to diversify risks. As an example, the Japanese government set up a JPY 243.5 billion fund to assist Japanese companies to leave China[3]. Although the amount is small (about 3.5% of estimated total Japanese investment in China), the signal and incentive are loud and clear.

President Donald Trump’s threat to decouple from China[4] may turn out to be a long-term US foreign policy because if there is one thing Democrats and Republicans agree on, it is that they both want to check the rise of China, and decoupling from China is seen as a means to that end. Indeed, US companies including Apple, Google and Microsoft have recently moved production to Asian countries such as Vietnam and Thailand and are considering further moves to India and Mexico.

It is all interconnected

However, the world’s integrated supply chains are centred on China and much of the foreign investment is targeting China’s domestic market.[5] A 2019 survey found that 95% of US companies invested in China for its domestic market and 87% had no intention of leaving.[6] Although views may change, decoupling is not an imminent and quick process, as the experiences of some countries can attest.

Japan, South Korea and Taiwan have tried to reduce concentration risk in China and increase investment in southeast Asia. However, their stock of FDI in China has remained large. Furthermore, southeast Asia is deeply integrated into the global supply chains that depend on China, so relocating productions there does not benefit diversification. China’s lockdown during the COVID-19 outbreak hit Japan, South Korea and Taiwan’s production lines directly and indirectly as supply chains in southeast Asia which rely on Chinese inputs for production shut.

Arguably, decoupling from China is part of the de-globalisation trend that has been unfolding for some time. International trade was stagnating before the pandemic, and global FDI had fallen by 31% in 2019 from its peak in 2007. COVID-19 sped up the reshoring as a risk management measure, especially for the production of strategic goods.

The process of de-globalisation forcing supply chain restructuring and decoupling from China may well continue, but it will unfold only slowly. It may lead to the emergence of two competing trading (and technology) blocs in the long term, with one led by China and the other led by the US. Such an outcome will reshape the global trade and technology landscape and have far-reaching investment implications.

[1] The sharp drop in net FDI flows to China in 2015 and 2016 was due to massive outward direct investment by Chinese firms in those years that put significant downward pressure on the renminbi and finally triggered Beijing’s capital control response at the end of 2016.