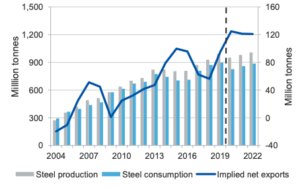 Hot on the heels of another junior, Flinders Mines (ASX:FMS), which last week was given the green light for its $5bn Pilbara iron ore project, Fenix is ready to begin construction work for Iron Ridge.

“We are all set to commence works on site before the end of this month, in line with our previously announced timeline to achieve first sales in early 2021,” Fenix managing director Rob Brierly said.

Fenix is proposing to ship 1.25 million tonnes per year of DSO iron ore, which only requires crushing and screening, from WA’s Geraldton port, 490km west of its Iron Ridge mine.

Cargoes with a 62 per cent iron content delivered to ports in China are currently securing prices of $US130 ($177.50) per dry metric tonne (dmt), a six-year high, according to Metal Bulletin.

Iron ore prices started to climb from early May after taking a mauling in the COVID-19 outbreak.

It is worth pausing to reflect that while current prices are the highest since early 2014, they quickly went downhill from this peak to the $US40s/dmt in 2016, as China’s growth slowed.

Another plausible reason for higher seaborne iron ore prices is the Chinese economic juggernaut’s continued recovery as reflected in its rising steel production.

Crude steel production for China was 689 million tonnes for the first eight months of the year ended August, up 3.7 per cent on January-August 2019, according to MySteel Global.

Chinese steel producer Baosteel is forecasting that China’s steel production will hit the magic annual number of 1 billion tonnes for the first time in 2020, up 4 per cent year on year.

This is a year earlier than expected by some, including the Australian government.

China is targeting annual growth of 5.5 per cent in its 2021-2025 five-year economic plan, and is pulling out all the stops to achieve this with massive steel-intensive infrastructure spending.

Iron ore analysts are rapidly revising upwards their price forecasts for the steelmaking mineral as major consumer China surprises with the strength of its demand recovery.

JP Morgan analysts are pitching a target iron ore price of $US105/dmt for 2021, up from $US100/dmt previously.