Connect with us
Rajashri Chakrabarti 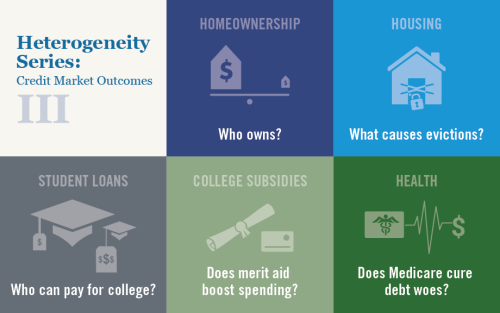 Average economic outcomes serve as important indicators of the overall state of the economy. However, they mask a lot of underlying variability in how people experience the economy across geography, or by race, income, age, or other attributes. Following our series on heterogeneity broadly in October 2019 and in labor market outcomes in March 2020, we now turn our focus to further documenting heterogeneity in the credit market. While we have written about credit market heterogeneity before, this series integrates insights on disparities in outcomes in various parts of the credit market. The analysis includes a look at differing homeownership rates across populations, varying exposure to foreclosures and evictions, and uneven student loan burdens and repayment behaviors. It also covers heterogeneous effects of policies by comparing financial health outcomes for those with access to public tuition subsidies and Medicare versus those not eligible. The findings underscore that a measure of the average, particularly relating to policy impact, is far from complete. Rather, a sharper picture of the diverse effects is essential to understanding the efficacy of policy.

Here is a brief look at each post in the series:

1. Inequality in U.S. Homeownership Rates by Race and Ethnicity

2. Who Has Been Evicted and Why?

Andrew Haughwout, Haoyang Liu, and Xiaohan Zhang explore the reasons behind evictions, who is more likely to be evicted, and the possibility of owning a home and gaining access to credit following evictions. Their findings reveal:

Rajashri Chakrabarti, William Nober, and Wilbert van der Klaauw investigate whether (and how) differences in college attendance rates and types of college attended may lead to student debt borrowing and default. The key takeaways include:

5. Medicare and Financial Health across the United States

Paul Goldsmith-Pinkham, Maxim Pinkovskiy, and Jacob Wallace investigate the effect of access to health insurance programs, as captured by Medicare eligibility, on financial health of individuals. They find:

As these posts will demonstrate in greater detail tomorrow, the average outcome doesn’t provide a full picture of credit market outcomes. There is considerable heterogeneity in different segments of the credit market both in terms of outcomes, as well as the in the effects of specific policies. Outcomes vary by a range of factors, such as differences in race, income, age, and geography. We will continue to study and write about the importance of heterogeneity in the credit market and other segments of the economy.

Rajashri Chakrabarti is a senior economist in the Federal Reserve Bank of New York’s Research and Statistics Group.

Introduction to Heterogeneity: Understanding Causes and Implications of Various Inequalities