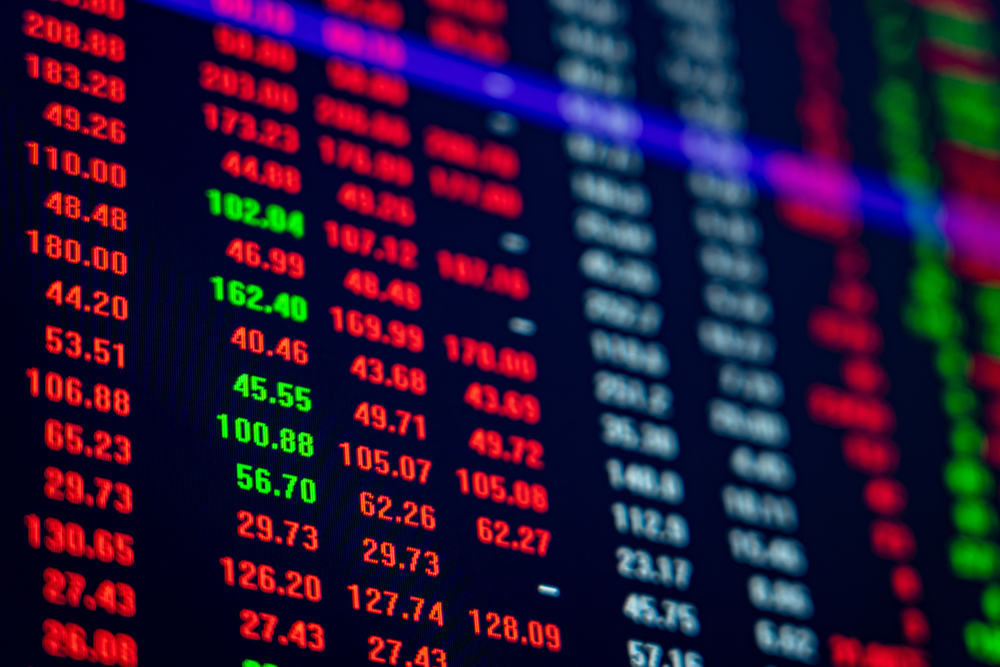 US stock indexes are advancing lifted by growing investor optimism that US lawmakers may agree on more fiscal stimulus before the US election amid a slowing economic recovery and a resurgence in Covid-19 cases.

Regeneron is leading gains on the S&P 500 Index surging 7.6% after the drugmaker’s experimental antibody cocktail was given to US President Donald Trump to treat his Covid-19 symptoms.

Deals, deals, deals: Shares of MyoKardia are spiking 58% after the biopharma company agreed to be acquired by Bristol Myers Squibb in a cash deal valued at $13.1 billion. Bristol Myers’ shares are up 0.5%.

Through the transaction, Bristol Myers gains MyoKardia’s experimental Mavacamten, used for the treatment of obstructive HCM (hypertrophic cardiomyopathy), which is a chronic heart disease.

In another pharma deal, Nasdaq-listed Eidos Therapeutics is soaring 40% as the company announced a buyout deal by BridgeBio Pharma. BridgeBio will acquire all of the outstanding common stock of Eidos it does not already own, or about 36.3%. Eidos stockholders will either receive 1.85 shares of BridgeBio common stock or $73.26 in cash per Eidos share up to an aggregate maximum payout of $175 million. The merger terms represent a 41% premium to the closing trading price of Eidos shares on Oct. 2.

Caterpillar is up 2.1% on news that it has agreed to acquire the Oil & Gas Division of the Weir Group PLC, a Scotland-based global engineering business, for $405M in cash. Headquartered near Fort Worth, Texas, Weir Oil & Gas produces a full line of pumps, flow iron, consumable parts, wellhead and pressure control products. CAT says the deal is part of its strategy to invest for long-term, profitable growth through expanded offerings and services.

Alibaba has snatched a deal to buy a stake of up to 9.99% in Dufry as part of a travel online joint venture (JV) in China. Dufry, which first started to operate travel retail businesses in China in 2008, manages duty-paid shops in the Shanghai and Chengdu airports.

Tulsa-based WPX Energy and Devon Energy are both advancing more than 2% after completing the sale of natural gas assets in the Barnett Shale to Banpu Kalnin Ventures for $570 million. Devon Energy received a cash payment of $320 million from Banpu Kalnin after adjusting for the $170 million deposit it received in April. The company is eligible to receive additional cash payments of up to $260 million over the next four years based on future commodity rates. The contingent payments will start if the Henry Hub natural gas price rises above $2.75 or West Texas Intermediate oil price rises above $50.

Targa Resources is popping 9.7% after its board of directors authorized a share repurchase program of up to $500 million, effective immediately. The natural gas company said that its overall business performance has been strong despite continued uncertainties tied to the COVID-19 impact. Targa estimates its full-year 2020 adjusted EBITDA to be at or around the high end of its previously provided outlook of $1.5 billion to $1.625 billion. Its 2020 net growth capital spending is forecast to be around the low end of its previously provided outlook of $700 million to $800 million.

In cinema news, AMC Entertainment is tanking 10% as peer Cineworld is planning to close all its 543 Regal Cinema venues in the US and 128 cinemas in the UK as soon as this week, says Variety. Regal is the US’s second-largest domestic theater chain. The Sunday Times reports that Cineworld is writing to UK Prime Minister Boris Johnson to say that the industry is now “unviable” due to the delay of big-budget releases such as the Bond movie.