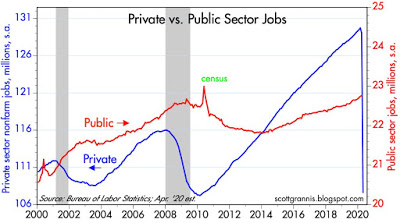 Here’s a quick compilation of charts that exhibit never-before-seen moves in various economic indices. Taken together, they illustrate just how much the current shutdown of the US economy is something we’ve never seen before. And to think it was all the result of the appearance of a novel coronavirus and the decisions of politicians around the globe—egged on by supposed experts—to impose draconian conditions on the free movement and interaction of most of the modern world’s population in an effort to stem the spread of the virus. Not to stop the virus, however, because at this point the virus cannot be eliminated—its spread can only be retarded. Sooner or later most of us will have been infected by the virus (and/or vaccinated) and somewhat more of us than is usual during perennial viral outbreaks will die. It’s a tragic situation, but by no means does it approach the level of prior global pandemics. And, I would suggest, nor does it justify such unprecedented shutdown actions. It looks more and more like the cure for this virus is worse than the disease.
Chart #1

Based on today’s March unemployment claims report, some 22 million people (almost all from the private sector) have lost their jobs and are now subsisting on unemployment insurance (see Chart #1). This virus has returned US employment numbers to levels last seen at the depths of the Great Recession in late 2009. 11 years of progress have gone down the drain in a matter of weeks. 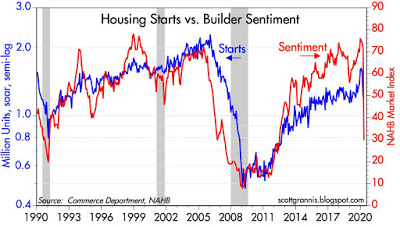 Although residential construction has been deemed to be “essential” (and its workforce thus allowed to continue working), home builders (red line in Chart #2) have suddenly lost almost all confidence in the future of their business. Housing starts have collapsed, but they will most likely fall further in the months to come. Such declines are sure-fire indicators of recessionary conditions. Think of the ripple effects of this on any number of industries dependent on housing. 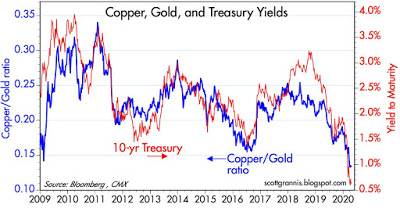 As Chart #3 shows, the ratio of copper to gold prices (blue line) has never before been so low. Traditionally, this ratio is strongly suggestive of the underlying growth dynamics of the US economy (a rising ratio being symptomatic of improving conditions, and vice versa). Moreover, 10-yr Treasury yields (red line) are now at all-time lows, which is also symptomatic of extremely weak economic growth potential. The only ray of hope I see here is that yields tend to move more at their extremes than does the copper/gold ratio, which in turn suggests that we may be at or close to the point of maximum weakness.
Chart #4 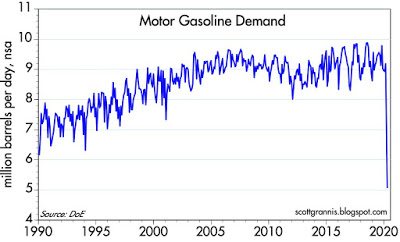 As Chart #4 shows, the shutdown of the US economy has had a profound impact on Americans’ mobility. Gasoline demand has, almost overnight, fallen by roughly 50%. The only silver lining to this very dark cloud that I can see is the complete absence of traffic on Los Angeles-area freeways—and the utter disappearance of what little smog we had. This also illustrates how the law of unforeseen consequences works; force people to stay home, which forces many businesses to shut down, which sharply reduces commuter traffic, which slashes gasoline consumption, which leaves business that depend on mobile customers in the lurch (automobile dealers, gas stations, restaurants, malls, etc.) Overnight the economy has been subject to conditions that could never have been foreseen even in the worst of worst-case scenarios, and which impact almost every aspect of modern life. It’s nothing short of a disaster. Thanks, politicians, for giving us a man-made disaster which surely eclipses the worst of earthquakes, tornadoes, and earthquakes. (Reminder: The shutdown of the US economy will prove to be the most expensive self-inflicted injury in the history of mankind. ™)
Chart #5 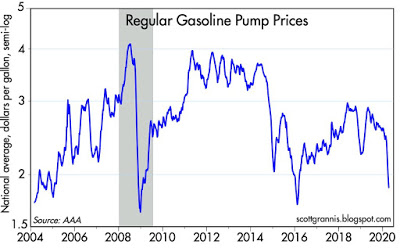 Chart #5 shows the average nationwide price of a gallon of regular gas at the pump. That it hasn’t fallen  further is likely a testament to the degree to which taxes now constitute a major portion of the cost to the consumer. I’ve seen reports that in some areas wholesale gasoline prices are near zero, and that’s likely due to the fact that storage capacity has declined to absolute minimum levels.
Chart #6 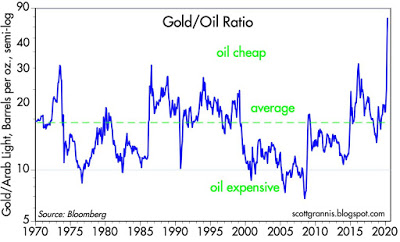 Chart #6 illustrates the ratio of gold to crude oil prices. Never before has oil been so cheap relative to gold. That’s the result of extremely low oil prices (~$20/barrel) and historically high gold prices (~$1700/oz.) Either gold is too expensive or oil is too cheap or some combination of the two. Such a sudden and radical change in relative prices is unlikely to persist for long. Will politicians please put on their pants and declare the shutdown over …
Chart #7 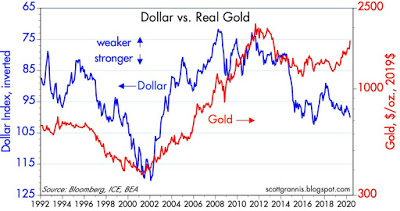 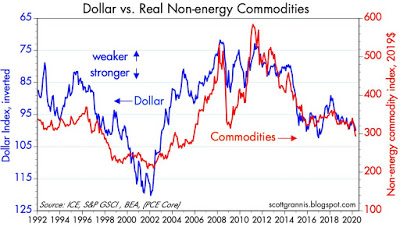 Chart #7 compares the value of the dollar (vis a vis a trade-weighted basket of other major currencies, and inverted), to the price of gold. Traditionally, periods of dollar weakness have coincided with periods of gold strength. But for the past two years or so we have seen the dollar and gold both strengthen. This is almost unprecedented, especially since, as Chart #8 shows, non-energy commodity prices have traditionally weakened as the dollar has strengthened and vice versa. Gold is the outlier these days. That could mean that the world is exceptionally risk-averse, or it could mean that the world fears that massive easing by the world’s central banks will usher in a new era of rising inflation. Or both. I’ll vote for the latter, but without maximum conviction.