“The high-level objectives of the 2022 Kwanika drill program are to grow the size of the resource and to improve the grade. One of the targets is to find additional very high-grade copper and gold mineralization as encountered in drill hole K-21-217 in 2021,” said Peter Bell, President and CEO. “We believe we have found more of this material in hole K-22-232 and have named this type of mineralization “chalcocite breccia”. While the new interval is narrower than last year’s hole, it is much closer to surface and suggests potential for multiple very high-grade zones within the deposit.

“The discovery of additional high-grade chalcocite breccia in a new area, close to surface, is an exciting exploration development for Northwest at Kwanika,” Bell continued. “This drilling supports our thesis that we can find more of this style of mineralization while expanding the volume of near-surface mineralization at Kwanika.”

Kwanika and the adjacent Stardust deposit are the current flagship projects at Northwest. The 2022 Kwanika drill program includes holes designed to expand the known resource, to add new high-grade zones within and around the known resource, and to test for new centres of mineralization regionally. Similarly, to the first set of drill results5, these four holes targeted expansion and delineation of near surface high-grade zones in the southern part of the Kwanika Central Zone. Kwanika drilling has been underway since March 25, with a total of 28 holes and 11,089 metres drilled to date. Results from seven of the holes have been reported so far, with the remainder outstanding.

Holes K-22-230, K-22-231, K-22-231 and K-22-233 are in the southern portion of the Central Zone. The drill holes were designed to test for shallow high-grade mineralization in an area with low drill density and to further constrain our structural model of the Kwanika Central Zone. All holes in this area hit high-grade mineralization with intervals or sub-intervals with grades higher than 1.00% CuEq.

K-22-230 was drilled to the northeast at 330 degrees and was designed to test in an area of lower drill density Kwanika Central Zone and test for structures to improve Northwest’s structural model in the Central Zone. K-22-230 hit a broad intersection of 378.8 metres with 0.62% CuEq with a high-grade sub interval of 87.6 metres at 1.03% CuEq.

K-22-233 was the final hole drilled in this area during this campaign, as above it targeted high-grade mineralization in the southern extent of the Central Zone in area with low drill density. It returned 102.90 metres at 1.00% CuEq starting at the surface below the till cover. This includes a 2.00-metre sample of 4.06% CuEq at upper contact.

The Kwanika project is accessible by road from Fort St. James.

Executives and production team members recently commemorated the production and sale of the 1000th Motor Grader, which is destined for Rio Tinto’s operations…

SmartTech is keeping it fresh by offering a complete solution for the provision of clean air with Freshfilter, its advanced cabin air filtration system…. 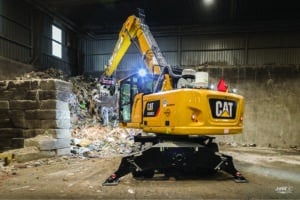