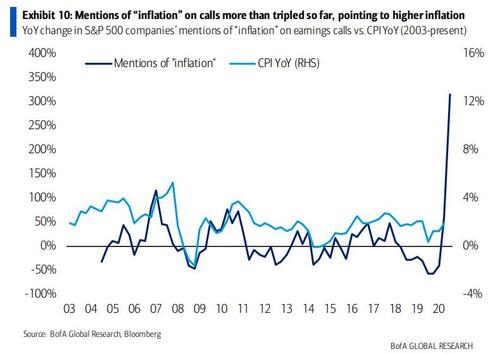 Last week, when discussing the latest earnings call commentary, Bank of America said "Buckle up! Inflation is here", and showed a chart of the number of mentions of “inflation” during earnings calls which exploded, more than tripling YoY per company so far, the and the biggest jump in history since BofA started keeping records in 2004.

As BofA's Savita Subramanian writes, after the third week of earnings. mentions of “inflation” have now quadrupled YoY; and after last week, mentions have jumped nearly 800% YoY!

While the implications are obvious, we leave it to Bank of America to explain what this means:

On an absolute basis, [inflation] mentions skyrocketed to near record highs from 2011, pointing to at the very least, “transitory” hyper-inflation ahead.

Because if there is one thing hyperinflation is, it's "transitory."

This article was originally published at http://feedproxy.google.com/~r/zerohedge/feed/~3/LBpp3Db4JJI/bofa-transitory-hyper-inflation-ahead