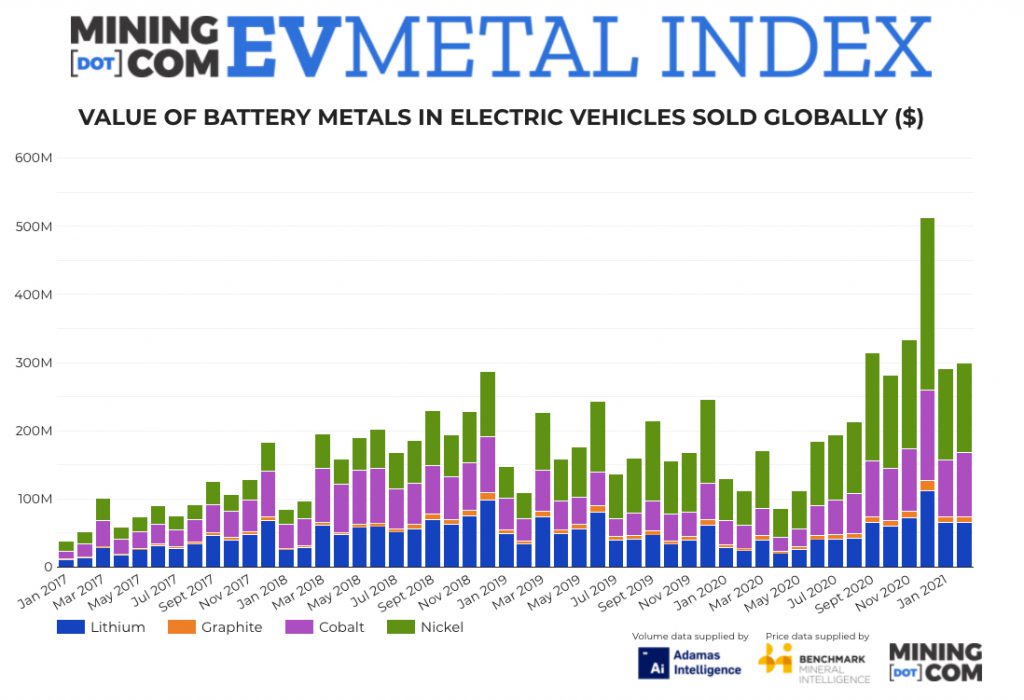 Despite a big drop from December’s blowout, largely due to seasonal factors, the February 2021 MINING.COM EV Metal Index, which tracks the value of battery metals in newly registered passenger EVs (including hybrids) around the world, still ranks as the fourth best month on record.

Just shy of $300 million worth of lithium, cobalt, nickel and graphite hit roads in February, up 170% from the same month last year as the impact of the coronavirus only just started to ripple beyond China. For the first two months, the year on year comparison is a 240% rise to $590 million.

The total battery capacity of EVs sold during the month increased 123% year on year to close to 11.3 GWh, according to Adamas Intelligence, which tracks demand for EV batteries by chemistry, cell supplier and capacity in over 90 countries.

To produce the most accurate data, the monthly battery capacity deployed numbers in the MINING.COM EV Metal Index do not include cars leaving assembly lines, those on dealership lots or in the wholesale supply chain, only included are end-user registered vehicles.

Tesla was number one in terms of battery capacity deployed, accounting for 1 out of every 4 MWh deployed in February (including hybrids) and also led in the deployment of lithium, nickel and cobalt.

The brawny electric version of Ford’s iconic pony car enjoyed a particularly successful February, coming in third worldwide after the two Tesla models in terms of battery capacity deployed with a 4% market share.

Deployment of cathode materials cobalt and nickel increased by two-thirds and 84% respectively compared to the same month last year. Nickel use in battery technologies has climbed steadily and now constitutes some 43% value of the index, underpinned by a rising price compared to a year ago.

Cobalt’s share is also climbing, to over 30% thanks to a sharp rally in the priciest cathode material from a low of $30,000 a tonne in December 2019 to above $65,000 a tonne, according to Benchmark’s February price assessment.

The increased use of cobalt and nickel also came despite the growing popularity of LFP (lithium-iron-phosphate) battery-equipped cars, which for the first two months of the year made up more than 16% of total battery capacity deployed worldwide.

LFP batteries are generally more associated with low cost, low range, compact vehicles like the Hong Guang Mini EV, made by Wuling, General Motors and SAIC, which costs less than $5,000.

Despite overtaking the Model 3 this year to become the world’s most popular electric car in terms of unit sales, the Hong Guang Mini only commands 3% of the market in terms of battery capacity versus the the Model 3, which accounts for 15.3% of the overall market on a MWh basis.

The entry-level LFP version Model 3 sold in China and exported in limited quantities to Europe alone holds 6% of the market.

While Volkswagen has said LFP would be its go-to battery for its entry-level models, China’s BYD confirmed that it is going all-in on LFP batteries, scrapping NCM technology from its model line-up entirely.

BYD, which is backed by legendary US investor Warren Buffet through a 21% stake, is the second-largest electric vehicle brand by volume behind Tesla and also supplies other carmakers with its battery technology.  BYD is also kicking off exports to Europe later this year.