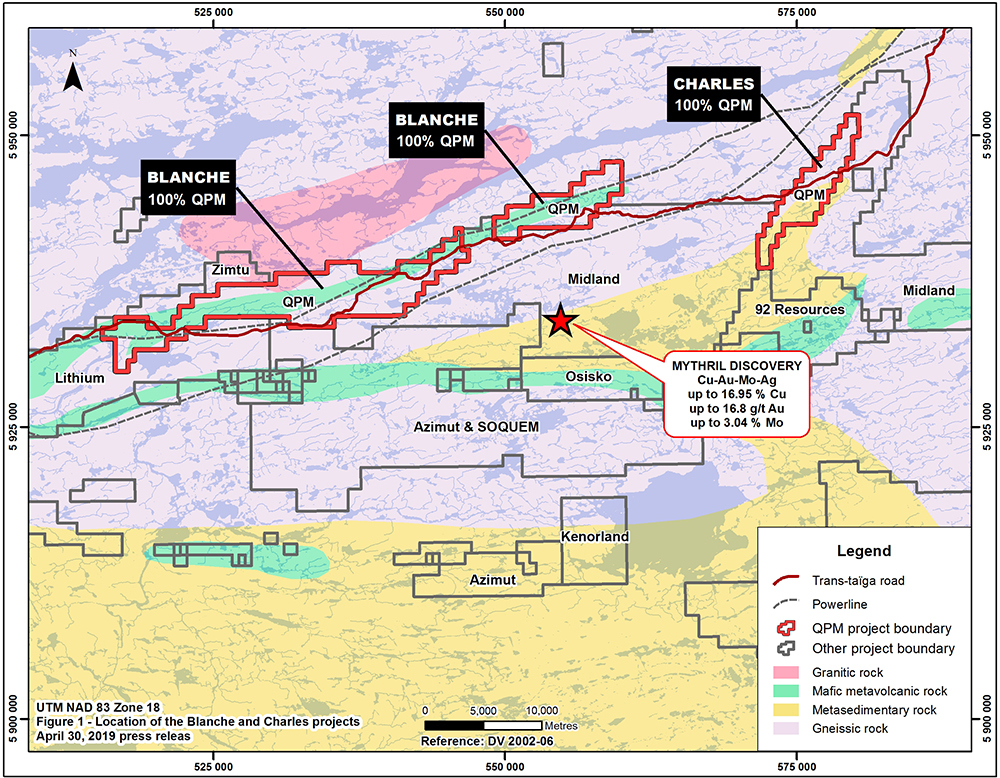 Quebec Precious Metals Corp. is selling all of its non-core assets so it can focus on its flagship Sakami gold project in the James Bay territory of Quebec.

The sale helps Idaho Champion pivot from precious metals toward all-important battery metals while Quebec Precious Metals can focus on Sakami and growing its resource estimate there, said Chris Temple, editor of The National Investor.

The junior explorer has entered into a binding memorandum of understanding with Idaho Champion Gold Mines Canada Inc. (ITKO:CNX) for them to acquire a 100% interest in the projects, which sit to the north of the Patriot Battery Metals’ Corvette project. Patriot recently intersected intervals including 1.25% lithium oxide and 118 parts per million tantalum pentoxide over 96 meters at Corvette.

The sale helps Idaho Champion pivot from precious metals toward all-important battery metals while Quebec Precious Metals can focus on Sakami and growing its resource estimate there, said Chris Temple, editor of The National Investor.

“Their job right now is to do what they can, if the goods are there, to impress people, … marshal all of the energy they can get and hope that they can and roll off that good resource,” Temple told Streetwise Reports.

Idaho Champion is purchasing 100% of the Blanche and Charles projects for CA$100,000 in cash and 12 million common shares in Idaho Champion, of which 50% will be subject to escrow for 18 months.

Quebec Precious Metals will also have a 2% net smelter return royalty on the claims after the acquisition.

Idaho Champion also announced a private placement of up to 20 million shares at CA$0.05 per share for CA$1 million to help pay for the transaction and fieldwork on the projects.

The move is part of Quebec Precious Metals’ strategy to sell off its non-core projects and advance its Sakami project to the mineral estimation stage. Sakami remains largely under-explored, with a potential of 2 million ounces (Moz) or more of gold, which could attract a major to mine and develop the property.

Quebec Precious Metals was formed from the merger of Canada Strategic Metals Inc. and Matamec Explorations Inc. in 2018. It came with some non-gold, non-James Bay projects that the company has been selling to help pay for exploration. The company has netted nearly CA$13 million from sales so far, including CA$8 million for the Kipawa-Zeus rare earth metals project in Quebec, which could close by the end of the month.

Quebec Precious Metals Chief Executive Officer Normand Champigny said the company was started with the hopes of finding the next Éléonore mine, one of the largest underground gold mines in Quebec and in the same area as Sakami, owned by the world’s largest miner, Newmont Corp.

The James Bay territory itself is about the size of Arizona. Gold was initially reported in the area in the 1890s, but it would take more than a century and significant development in the area before it got the attention of investors. The company has drilled over 50,000 meters at Sakami.

For Idaho Champion, President and Chief Executive Officer Jonathan Buick told Streetwise Reports that the proximity of the properties to Patriot was a drawing point.

“The opportunity and portfolio in Quebec made a lot of sense,” Buick said. “We’re pivoting to become a battery metals-focused company.”

Lithium and other critical elements are needed in massive quantities for the world’s shift to green energy. It’s a major component of electric vehicle (EV) batteries.

In less than two years, one out of every five vehicles sold worldwide could be an EV. Ford and General Motors have set a goal to achieve 40–50% of their sales from EVs in the U.S. by 2030. And the climate and energy package just passed by the United States is bringing new urgency to EV metals and minerals. To qualify for tax credits, a significant percentage of batteries and minerals in batteries must come from the U.S. or Canada, a regional trade-treaty country.

“We’ve seen the electrification of the world, but certainly specific to the U.S. and North America,” Buick said. “The need and opportunity for advancing battery metal products in cobalt or lithium is crucial. There’s a desperate need to secure a good supply.”

Newmont owns about 13% of QPM. Government-backed Caisse de Dépôt et Placement du Québec and other Québec institutions own about 12%, and QPM management owns 1.3%.

1) Steve Sobek wrote this article for Streetwise Reports LLC and provides services to Streetwise Reports. He or members of his household own securities of the following companies mentioned in the article: None. He and members of his household are paid by the following companies mentioned in this article: None.

2) The following companies mentioned in this article are billboard sponsors of Streetwise Reports: Quebec Precious Metals Corp. Click here for important disclosures about sponsor fees. The information provided above is for informational purposes only and is not a recommendation to buy or sell any security.

4) From time to time, Streetwise Reports LLC and its directors, officers, employees or members of their families, as well as persons interviewed for articles and interviews on the site, may have a long or short position in securities mentioned. Directors, officers, employees or members of their immediate families are prohibited from making purchases and/or sales of those securities in the open market or otherwise from the time of the decision to publish an article until three business days after the publication of the article. The foregoing prohibition does not apply to articles that in substance only restate previously published company releases. As of the date of this article, officers and/or employees of Streetwise Reports LLC (including members of their household) own securities of Quebec Precious Metals Corp., a company mentioned in this article.