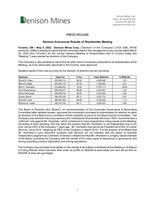 TORONTO, May 4, 2022 /CNW/ – Denison Mines Corp. (“Denison” or the “Company”) (TSX: DML) (NYSE American: DNN) is pleased to report that the nominees listed in the management proxy circular dated March 23, 2022 (the “Circular”) for the Annual General Meeting of Shareholders held in Toronto today (the “Meeting “) were elected as directors of the Company. View PDF

The Company is also pleased to report that all other items of business presented to its shareholders at the Meeting, as more particularly described in the Circular, were approved.

Detailed results of the vote by proxy for the election of directors are set out below.

The Board of Directors (the “Board”), on recommendation of the Corporate Governance & Nominating Committee (after detailed review), approved the individuals nominated to shareholders for election to serve as directors of the Board and is confident of their suitability to serve on the Board and its Committees.  The Company was advised that proxy advisory firm Institutional Shareholder Services (“ISS”) recommended a “withhold” vote against Mr. Hochstein, which is believed to have impacted the voting results at the Meeting.  According to their reporting, ISS has taken the position that Mr. Hochstein is not independent due to his prior role as CEO of the Company 7 years ago.  Mr. Hochstein has served as President and CEO of Lundin Gold Inc. since 2014, resigning as CEO of the Company in March 2015.  It is the position of the Board that Mr. Hochstein’s prior executive positions with Denison do not interfere with his ability to exercise independent judgment as a member of Denison’s Board and that Mr. Hochstein is a highly valued member of the Board, providing the Company with the benefit of his many years of experience in governance and mining (including uranium exploration and mining operations).

The Company has provided more details on the results of all matters considered at the Meeting in its Report of Voting Results which has been filed under its profile on SEDAR at www.sedar.com and will be filed on EDGAR at www.sec.gov/edgar.

Denison is a uranium exploration and development company with interests focused in the Athabasca Basin region of northern Saskatchewan, Canada. The Company has an effective 95% interest in its flagship Wheeler River Uranium Project, which is the largest undeveloped uranium project in the infrastructure rich eastern portion of the Athabasca Basin region of northern Saskatchewan. Denison’s interests in Saskatchewan also include a 22.5% ownership interest in the McClean Lake joint venture, which includes several uranium deposits and the McClean Lake uranium mill that is contracted to process the ore from the Cigar Lake mine under a toll milling agreement, plus a 25.17% interest in the Midwest Main and Midwest A deposits, and a 66.90% interest in the Tthe Heldeth Túé (“THT,” formerly J Zone) and Huskie deposits on the Waterbury Lake property. Each of Midwest Main, Midwest A, THT and Huskie are located within 20 kilometres of the McClean Lake mill.

Denison is also engaged in post-closure mine care and maintenance services through its Closed Mines group (formerly Denison Environmental Services), which manages Denison’s reclaimed mine sites in the Elliot Lake region and provides related services to certain third-party projects.

Certain information contained in this news release constitutes ‘forward-looking information’, within the meaning of the applicable United States and Canadian legislation concerning the business, operations and financial performance and condition of Denison. Generally, these forward-looking statements can be identified by the use of forward-looking terminology such as ‘plans’, ‘expects’, ‘budget’, ‘scheduled’, ‘estimates’, ‘forecasts’, ‘intends’, ‘anticipates’, or ‘believes’, or the negatives and/or variations of such words and phrases, or state that certain actions, events or results ‘may’, ‘could’, ‘would’, ‘might’ or ‘will be taken’, ‘occur’, ‘be achieved’ or ‘has the potential to’.

In particular, this news release contains forward-looking information pertaining to the following: the composition of the Denison Board; expectations regarding Denison’s joint venture ownership interests and the continuity of its agreements with third parties.

Forward looking statements are based on the opinions and estimates of management as of the date such statements are made, and they are subject to known and unknown risks, uncertainties and other factors that may cause the actual results, level of activity, performance or achievements of Denison to be materially different from those expressed or implied by such forward-looking statements. Denison believes that the expectations reflected in this forward-looking information are reasonable but no assurance can be given that these expectations will prove to be accurate and results may differ materially from those anticipated in this forward looking information. For a discussion in respect of risks and other factors that could influence forward-looking events, please refer to the factors discussed in Denison’s Annual Information Form dated March 25, 2022 under the heading ‘Risk Factors’. These factors are not, and should not be construed as being, exhaustive.