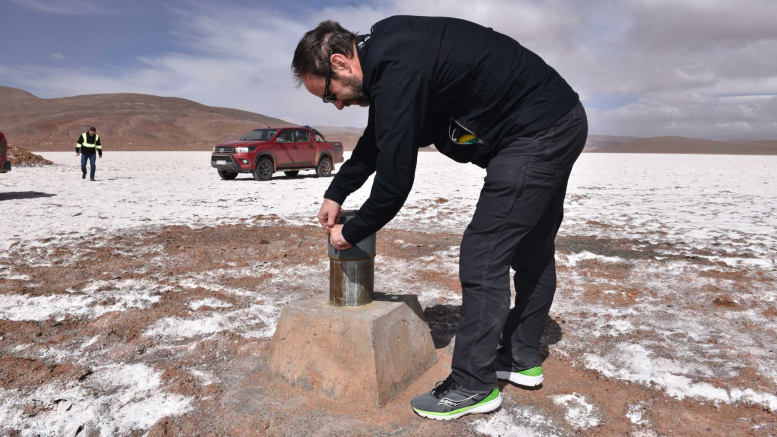 The Study refers to only one of three fresh water targets the Company plans to investigate on its Tolillar property.

Much of the Lithium Triangle surrounding Tolillar Salar is classified as a high-altitude desert, with near-zero absolute humidity, making the general area drier than the Sahara Desert and one of the driest places on earth. Since abundant fresh water is rarely found in the Lithium Triangle, and it is a necessity for the production of lithium chemicals, the discovery of an industrial scale supply is a tremendous competitive advantage for the Company.

According to the Study completed by industry expert, Conhidro SRL, Alpha enjoys the advantage of controlling a very large aquifer that can deliver large amounts of fresh water at high rates, and importantly, the Company does not have to compete with any other regional producers for that fresh water.

Technically, the most important considerations with fresh water sources for the purposes of lithium production are:

As outlined in the Study, Alpha’s fresh water aquifer in Tolillar has the following estimated considerations:

Brad Nichol, President and CEO of Alpha, commented, “The existence of an on-site, non-competitive, high delivery rate, high recharge rate, water aquifer is a game-changer for Tolillar. We have known for some time that we had access to fresh water, but that broad knowledge had to be supported by detailed data and analysis, which we now have thanks to Conhidro. And the results change everything. Other companies have reported availability of fresh water but often underreport issues like highly-competitive access, poor or remote locations, low delivery rates, or some combination of these and other issues. Alpha’s fresh water source will be a major attraction to the world’s most aggressive acquirers of lithium assets.”

All operations and assets of the Company are in Argentina and are fully managed by Alpha Lithium Argentina SA (“Alpha SA”) utilizing local employees and consultants. Neither Alpha, nor Alpha SA, have any operations or assets in Canada.

Since initiating the first steps of an exploration program in 2020, Alpha SA has drilled more than 20 wellbores, constructed an in-house brine chemistry research laboratory, developed a proprietary Lithium Carbonate production process that works in Tolillar with remarkable success, started construction of a pilot plant, and employed dozens of highly skilled Argentinian technologists, engineers, geologists, geophysicists and chemists, in addition to several students, accounting, managerial and HR professionals. The Company is grateful for, and reliant upon, the significantly large Argentinian team that has proven instrumental at generating value for shareholders.

ON BEHALF OF THE BOARD OF ALPHA LITHIUM CORPORATION

Alpha Lithium is a team of industry professionals and experienced stakeholders focused on the development of the Tolillar and Hombre Muerto Salars. In Tolillar, we have assembled 100% ownership of what may be one of Argentina’s last undeveloped lithium salars, encompassing 27,500 hectares (67,954 acres), neighboring multi-billion-dollar lithium players in the heart of the renowned “Lithium Triangle”. In Hombre Muerto, we continue to expand our 5,000+ hectare (12,570 acres) foothold in one of the world’s highest quality, longest producing, lithium salars. Other companies in the area exploring for lithium brines or currently in production include Orocobre Limited, Galaxy Lithium, Allkem Ltd., Livent Corporation, and POSCO in Salar del Hombre Muerto; Orocobre in Salar Olaroz; Eramine SudAmerica S.A. in Salar de Centenario; and Gangfeng and Lithium Americas in Salar de Cauchari.

No securities regulatory authority has reviewed nor accepts responsibility for the adequacy or accuracy of the content of this news release.