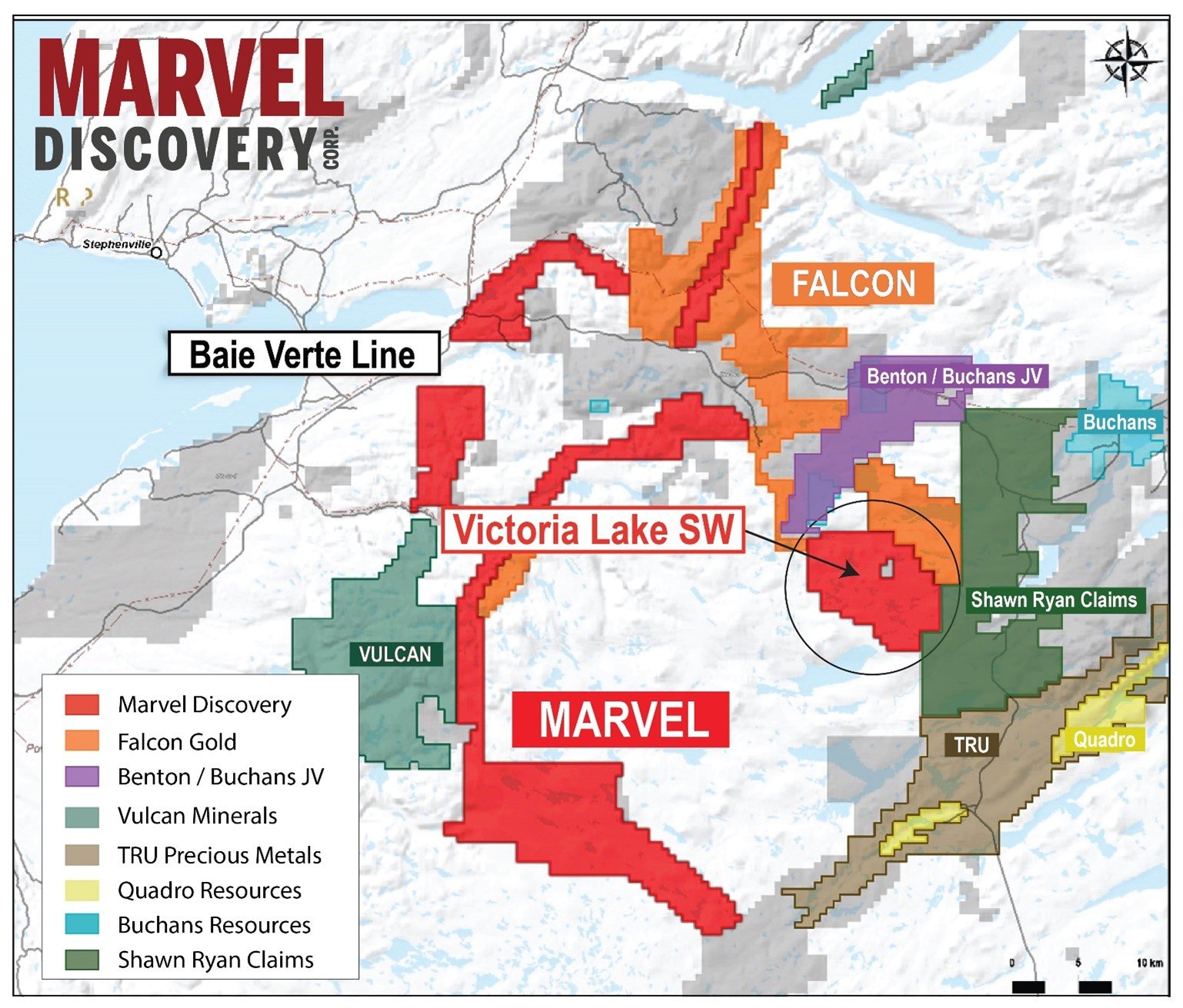 VANCOUVER, BC / ACCESSWIRE / April 7, 2022 / Marvel Discovery Corp. (TSXV:MARV)(Frankfurt:O4T)(OTCQB:MARVF); (the “Company”) is pleased to announce it has acquired, via staking, additional ground west of Valentine Lake. This new land position called Victoria Southwest (the “Property”) consists of 253 claims (6,325 hectares) and is contiguous to Falcon Gold Corp, Benton Resources, Buchan Minerals Corp and a significant land package staked by Shawn Ryan. The Property lies 40 kilometers (km) west of the Valentine gold deposit and 65km southwest of the town of Buchans. The Valentine gold deposit which hosts 6.8 million ounces of gold (Moz. Au) (all categories) and is now under development (https://marathon-gold.com/valentine-gold-project/). Falcon has immediate plans to commence high resolution magnetic surveys upon approval of exploration permits.

In early 2011, Buchans Minerals and Benton Resources completed prospecting activities in the immediate area that identified abundant mineralized quartz vein material containing trace to several percent sulphides. Analytical results of the grab samples assayed between 1.65 to 18.24 g/t Au and between 5.4 to 87.1 g/t Ag in subcrop samples. Grab samples from outcrop assayed up to 8.52 g/t Au and 30.7 g/t Ag. (Grab samples are selected samples and not necessarily representative of the mineralization hosted on the property). Of considerable interest within this immediate area are float samples consisting of angular boulders which showed up to 106.4 g/t Au and 364.3 g/t Ag. It does not appear that any of the follow-up work within this area was able to determine the source of this high-grade sample.

Mr. Karim Rayani, President and CEO commented, “Marvels timing into the camp could prove ideal as recent activity has started to highlight Buchans-Benton prospecting program from 2011. High-grade gold samples lie within 2.4km of our claim boundary and the source of this boulder does not appear to have ever been found. Our in-house studies suggest that within this immediate area, structural controls on mineralization are poorly understood and we aim to fly the entire area with high-resolution magnetic surveys to be followed up with detailed litho-structural and target generation studies.”

Structurally controlled orogenic gold deposits in Newfoundland are associated with crustal-scale fault zones within the Central Newfoundland gold belt. These major fault zones include the Baie Verte-Brompton Line, the Cape Ray Fault Zone, the Red Indian Line, and the Victoria Lake Shear Zone (Figure 2). The largest known gold deposit in Newfoundland occurs at Valentine Lake (Marathon Gold Corp,) in the footwall of the Victoria Lake Shear Zone. To date the Marathon Gold has discovered five (5) deposits along a 20km trend and together these represent the largest undeveloped resources in Atlantic Canada with reserves and resources of 6.8 Moz. Au. Also notable with the area is the Matador Mining Cape Ray deposit which hosts 837,000 oz. of Au (https://matadormining.com.au/cape-ray/). Recent structural interpretations of regional scale geophysical surveys led Marvel Discovery to the staking of this land package due numerous interpreted oblique trends and tertiary splay zones which are considered highly prospective for gold mineralization.

Mr. Mike Kilbourne, P. Geo, an independent qualified person as defined in National Instrument 43-101, has reviewed, and approved the technical contents of this news release on behalf of the Company. The QP has not completed sufficient work to verify the historic information on the property.