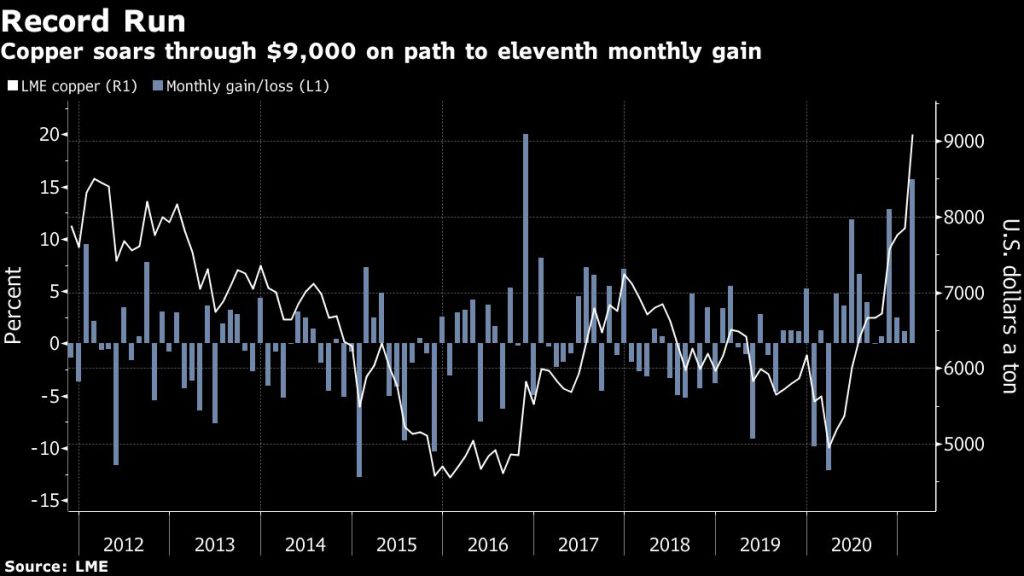 Copper kept its momentous run going on Monday, now closing in on an all-time high set in 2011, as investors bet that supply tightness will increase as the world recovers from the covid-19 pandemic.

Since its nadir last March, copper prices have nearly doubled, boosted by rapidly tightening physical markets, prospects for rebounding economic growth and the expectation that a years-long era of low inflation in key economies may be ending.

Click here for an interactive chart of copper prices.

Investors are also piling into copper on a bet that demand will surge in the coming years, as governments worldwide unleash unprecedented stimulus programs targeting renewable energy and electric vehicles, which will require huge volumes of the metal.

“The list of bullish factors for copper is extremely long,” Max Layton, head of EMEA commodities research at Citigroup Inc., told Bloomberg by phone, adding that:

“A lot of the most bullish developments are really going to play out in the next few months, and therefore we think it’s going to be sooner rather than later that it gets to $10,000.”

In some areas of the physical copper market, supply conditions are at the tightest in years and may come under even more pressure as smelters in top consumer China face shrinking profit margins for processing raw ore into refined metal.

Copper treatment charges, an indicator of refining margins, are at $45.50 a tonne, the lowest since 2012. One leading supplier is considering cutting output, in a potential blow to buyers, Bloomberg reported.

Surging prices have given miners a boost, driving up stock prices and raising the prospect of more returns to shareholders. Some of the top copper stocks have risen by double digits over the past month.

Jiangxi Copper, China’s top producer, gained as much as 20% in Hong Kong to the highest level since 2012, while US producer Freeport-McMoRan closed last week the highest since 2014.

(With files from Bloomberg)

Should You Be investing in Uranium in 2021? The Experts Weigh In.