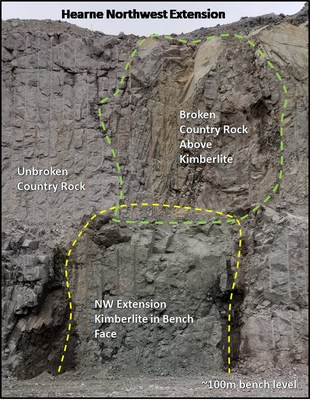 TORONTO and NEW YORK, July 18, 2022 /PRNewswire/ – Mountain Province Diamonds Inc. (“Mountain Province”, the “Company”) (TSX: MPVD) (OTC: MPVD) is pleased to provide interim drilling results for the Hearne Northwest Extension at Gahcho Kué Mine. The Hearne kimberlite is one of four kimberlites being mined at Gahcho Kué, presently ranked at 5th in the world with an annual diamond production of approximately six million carats. Mountain Province is a 49% shareholder at Gahcho Kué with joint venture partner De Beers Canada as operators. With the success of the recently completed drilling program, further drilling of the Northwest Extension will be implemented with the goal to define the volume and depth extent of the kimberlite.

“Hearne has been a consistent surprise since mining started at Gahcho Kué. Hearne was originally defined with separate north and south lobes, which we redefined in 2018 after drilling out additional kimberlite ore that connected the two lobes. In-pit mining has now discovered more kimberlite extending to the northwest and to depth and so far, the results fully support the opportunity to consider the underground extraction of diamonds at Gahcho Kué in the future. We look forward to further delineating the Hearne northwest extension with the goal of increasing the Gahcho Kué mine life.”

The Hearne Northwest Extension was exposed in a bench face in late 2021 during routine mining operations. Geophysical surveys were conducted over the exposed kimberlite, on the ramp over the bench face exposure, and outside of the pit to the west-northwest. Based on in-pit geophysics, drilling focused to the west northwest where similar electromagnetic and gravity signatures were similar to those in the pit. The original exposure of kimberlite in the Hearne pit is provided in the first image. The kimberlite is outlined in yellow, with broken country rock above the kimberlite outlined in green. The horizontal distance across the kimberlite exposure is roughly 25 meters.

Since January 2022, 14 drillholes (4,284 meters) have defined the Hearne Northwest Extension. The results indicate that the extension trends more northerly than was suggested by the geophysics. The geophysics identified a northwest-trending structure, but two drillholes completed across the structure did not intersect kimberlite. Plan views of the Hearne Northwest Extension relative to the open pit, ground geophysics and recent drilling are seen in the second set of images. 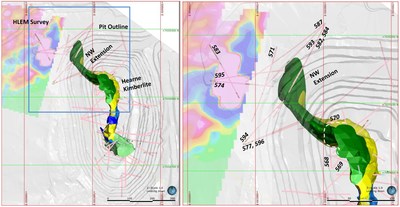 Nine of the 14 drillholes have intersected hypabyssal kimberlite (‘HK’) and tuffisitic kimberlite (‘TK’) with intersects ranging from 23.02 to 114.53 meters. Drillhole MPV-22-595C is still underway in kimberlite with an intersect of 48 meters as at the time of this release. Both the HK and TK rock types are visually consistent with the known internal units at Hearne. The true thickness and depth extent of the Northwest Extension are unknown based on the limited drilling results. A summary of drilling that presently defines the Hearne Northwest Extension is provided below.

Logging, petrographic and mineral chemistry studies are underway to properly define the HK and TK contacts in the extension and their relationship to the main Hearne kimberlite. Following on results of these detailed studies, further drilling will be implemented with the goal to define the volume and depth extent of the Northwest Extension.

Mountain Province Diamonds is a 49% participant with De Beers Canada in the Gahcho Kué diamond mine located in Canada’s Northwest Territories. The Gahcho Kué Joint Venture property consists of several kimberlites that are actively being mined, developed, and explored for future development. The Company also controls 106,202 hectares of highly prospective mineral claims and leases that surround the Gahcho Kué Joint Venture property that include an indicated mineral resource for the Kelvin kimberlite and inferred mineral resources for the Faraday kimberlites.

For further information on Mountain Province Diamonds and to receive news releases by email, visit the Company’s website at www.mountainprovince.com.

The disclosure in this news release of scientific and technical information regarding Mountain Province’s mineral properties has been reviewed and approved by Matthew MacPhail, P.Eng., MBA, and Tom E. McCandless, Ph.D., P.Geo., both employees of Mountain Province Diamonds and Qualified Persons as defined by National Instrument 43-101 Standards of Disclosure for Mineral Projects.

Factors that could cause actual results to vary materially from results anticipated by such forward-looking statements include the development of operation hazards which could arise in relation to COVID-19, including, but not limited to protocols which may be adopted to reduce the spread of COVID-19 and any impact of such protocols on Mountain Province’s business and operations, variations in ore grade or recovery rates, changes in market conditions, changes in project parameters, mine sequencing; production rates; cash flow; risks relating to the availability and timeliness of permitting and governmental approvals; supply of, and demand for, diamonds; fluctuating commodity prices and currency exchange rates, the possibility of project cost overruns or unanticipated costs and expenses, labour disputes and other risks of the mining industry, failure of plant, equipment or processes to operate as anticipated. 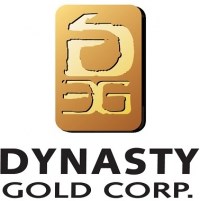 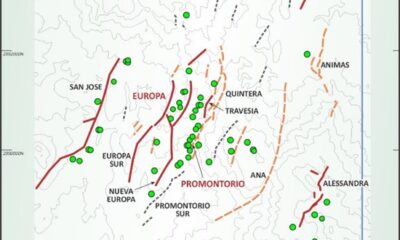