In this new year, the world will continue to be one of geopolitical uncertainty which we believe will deliver heightened interest in gold and a strong following for companies in the gold exploration sector.

We made impressive progress with exciting exploration results in 2022 providing a solid foundation for growth to shareholders in 2023. In addition to the summary of these 2022 milestones, I am pleased to provide you with insight into our plans for the year ahead with particular focus on our flagship “Reliance Gold Project”. As many of you know Reliance is a newly recognized discovery in a major historic gold camp located north of Whistler and next to the community of Gold Bridge, BC, 10 kilometers northeast of the famed Bralorne-Pioneer Gold Mine that produced over 4 million ounces of gold and still stands as the largest historic gold producer in British Columbia.

I would like to commend the talented team of geologists, geoscientists, contractors and support staff for their hard work and determination that have all contributed to our success in 2022. We continued to build on our corporate commitment of early and constant dialogue with the local communities including striving for the goal of assisting in continued capacity growth and employment for the local First Nation communities that are now an integral part of our successful team.

Reliance continued to reveal its secrets during the 2022 field season with an outstanding record of significant gold intersections in 75% of all diamond drill holes completed and assayed to date. Final assay results for the remaining drill holes should be reported soon.

2023 is expected to be another year of discovery-stage drilling to expand the Reliance gold discoveries at depth and along strike and advance the exploration of other structural trends at Reliance to drill-stage. We will also expend some effort to unlock the value of our portfolio of other 100% owned top-quality drill stage exploration projects through strategic funding initiatives.

We hope you find the following summary of our 2022 accomplishments and objectives for the year ahead helpful. We encourage you to visit the company’s website for more detailed information on Reliance and our other projects and to join our email list which will ensure prompt receipt of all news and information published by the company.

A very happy and prosperous New Year to you all.

On behalf of the Board and the Endurance Gold Team

To view the source version of this press release, please visit https://www.newsfilecorp.com/release/151087 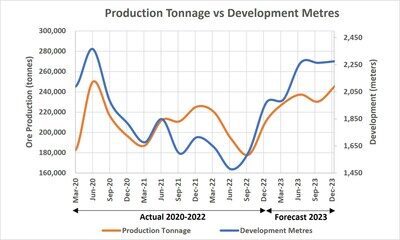