VANCOUVER, BC / ACCESSWIRE / April 6, 2022 / GGL Resources Corp. (TSXV:GGL) (“GGL” or the “Company”) is please to announce that phase 1 of its planned 2022 exploration program has started at its Gold Point Project in the Walker Lane Trend of western Nevada with the completion of helicopter-borne magnetic and radiometric survey having been flown across the entire property. Data from this survey are now being compiled and interpreted.

GGL has also secured a work permit from the BLM that will allow for the rehabilitation of shafts at the Orleans Mine, the largest of four former producers on the Gold Point Property.

Lithological and structural mapping is being done in conjunction with soil geochemical surveys in all parts of the property that are not covered by Pediment outwash. Work will begin this quarter to access underground workings on the former Orleans and Grand Central Mines. These workings will then be mapped, sampled and surveyed with underground LiDAR equipment.

The objectives of phase 1 of the 2022 program are 1) to identify areas on the property that are prospective for open-pit, bulk mining, and 2) to evaluate the potential for high-grade underground mining utilizing the existing underground workings.

Phase 2 of the 2022 exploration program is expected to start after the data from phase 1 is received and interpreted. Phase 2 will involve RC drilling focussed on bulk tonnage targets, but may also include underground long-hole drilling to test areas of high-grade mineralization found within the underground workings.

The Gold Point project is accessible via highway 774 and serviced by electricity. It hosts a camp-scale precious metal system that consists of numerous gold and silver rich quartz veins. These high-grade veins are typically 1 to 2 m in width and locally up to 7 m wide. There are four formerly producing mines on the property, but historical information is only available for two of them (Orleans and Great Western).

The Orleans and Great Western were intermittently mined from the 1880s through to the early 1960s. Existing underground workings are mostly open and are dry to approximately 275 m below surface on the Orleans Vein (1020 ft level) and 240 m on the Great Western Vein, (960 ft level). Historical records indicate that the mines had high cut-off grades (about 10 g/t gold), suggesting that well mineralized areas likely remain in un-mined portions of the developed workings. This assumption is supported by a report that describes 35 historical samples collected post-mining across the Orleans Vein from the 960 ft to 1020 ft levels, which averaged 0.389 opt (13.3 g/t) gold including a vein on the 1000 ft level that returned 7.97 opt (273.2 g/t) gold over 0.5 m. Additionally, 21 samples from the 600 ft to 1020 ft levels reportedly averaged 0.314 opt (10.77 g/t) gold. Historical records indicate that approximately 74,000 ounces were produced from the Orleans and Great Western Mines, with recoveries of 92% to 98% for gold through cyanidation.

Technical information in this news release has been reviewed and approved by Matthew R. Dumala, P.Eng., a geological engineer with Archer, Cathro & Associates (1981) Limited and a qualified person for the purposes of National Instrument 43-101.

GGL is a seasoned, Canadian-based junior exploration company, focused on the exploration and advancement of under evaluated mineral assets in politically stable, mining friendly jurisdictions. The Company has optioned and wholly owned claims in the Gold Point district of the prolific Walker Lane Trend, Nevada. The Gold Point claims cover several gold-silver veins, four of which host past producing high-grade mines. The Company also owns the McConnell gold-copper project located 22 kilometers southeast of the Kemess Mine in north-central BC, and promising diamond exploration projects in Nunavut and the Lac de Gras diamond district of the Northwest Territories. Lac de Gras is home to Canada’s first two diamond mines, the world class Diavik and Ekati mines discovered in the 1990s. GGL also holds diamond royalties on mineral leases near the Gahcho Kué diamond mine in the Northwest Territories.

This news release may contain forward looking statements based on assumptions and judgments of management regarding future events or results that may prove to be inaccurate as a result of exploration and other risk factors beyond its control, and actual results may differ materially from the expected results. 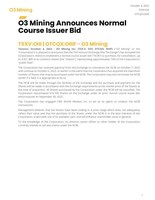 NOT FOR DISTRIBUTION TO UNITED STATES NEWSWIRE SERVICES OR FOR DISSEMINATION IN THE UNITED STATES VANCOUVER, British Columbia, Oct. 04, 2022 (GLOBE…