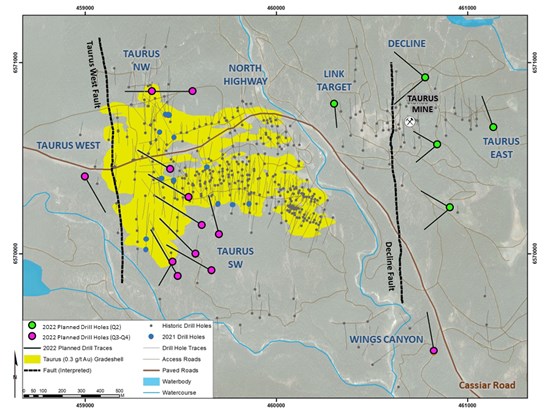 The drill campaign is planned to operate from June to the end of October utilizing three diamond drill rigs which will drill approximately 10,000 m in the Taurus Deposit area, 5,000 m in the Cassiar South project area and 5,000 metres at high-priority regional targets. The Company will also be carrying out geologic mapping and sampling work at various regional targets such as Lucky and Snow Creek during the field season.

“Results from our 2021 drill program have demonstrated the robust nature and resource growth potential of our Taurus deposit as well as the ability of our technical team to successfully tap into prospective high-grade vein systems at Cassiar South,” stated Marco Roque, President and CEO of Cassiar Gold. “We are excited to return to the property this year with our largest drill program so far to build upon last year’s success. We also look forward to testing a series of high-priority regional targets with the goal of making new discoveries across our district-scale property package.”

The 2022 drill campaign has commenced with two rigs, which will initially be focused at the Taurus Deposit. A third rig will start in mid-June to concurrently test discovery and expansion vein targets at Cassiar South followed by high-priority regional targets, contingent upon results of the 2022 field work.

Of the total 10,000 m of drilling planned at Taurus, approximately 8,000 m will be focused on step-out drilling and 2,000 m will comprise infill and deep drilling. Step-out drill holes will be located between 50 m to 200 m away from the known resource and drilled to a depth of 250 m or deeper with the aim of expanding the known resource footprint. Infill holes are designed to link mineralization within areas of the deposit where gaps in mineralization are present due to historical drill holes being too widely spaced. The Company also plans to drill two to three deeper holes to a vertical depth of up to 500 m aimed at potentially expanding mineralization at depth and testing for potential stacked mineralized zones.

Drilling at Taurus will comprise a multi-phase program, with Phase I consisting of eight step-out drill holes planned east of the known resource (Figure 1). Phase I drilling aims to: (1) evaluate the potential for expansion of known mineralization adjacent to the past-producing Taurus Mine to the east, north and south, and (2) test the area between the current 1.4 Moz inferred Taurus resource and the past producing Taurus Mine to the east. Drilling will test for extensions of known mineralization as well the presence and potential influence of major interpreted structures.

Phase II of the program will consist of approximately 12 step-out and infill holes and is designed to test possible lateral, down-dip and down-plunge extensions of higher-grade mineralization in the western parts of the Taurus deposit as well as the continuity of mineralization across the mineralization-controlling Taurus West Fault. The program also includes a step-out hole at the Wings Canyon regional target where historical drilling in 2009 had intersected 128.5 m of 0.56 g/t Au and 90.6 m of 0.55 g/t Au2.

Later during the quarter, one drill rig will begin to target vein systems at the Cassiar South project area which hosts a multitude of gold-bearing shear veins and several past-producing underground mines that have historically produced over 315,000 ounces of gold grading between 10 to 20 g/t Au3.

Extensive historical drilling and mining data has been used to identify and prioritize targets based on: (i) potential areas for vertical stacking of new vein systems within favourable stratigraphy, (ii) lateral and down-dip extensions of known vein systems, and (iii) periodicity of parallel sets of productive vein systems to identify new corridors of high-grade veins of the style which has been historically mined. Additional details of Cassiar South drilling will be disclosed once drilling commences.

The Company will be carrying out geologic mapping and sampling work at various regional targets such as Snow Creek, Lucky and Elan. Preliminary passive seismic work may also be carried out at Cassiar South to determine argillite cover thickness and to identify underlying blind shear zones that may be host to additional auriferous vein systems in the project area.

The technical information in this news release has been reviewed and approved by Jill Maxwell, P.Geo., Cassiar Gold Corp.‘s Exploration Manager, who is a Qualified Person as defined by National Instrument 43-101.

To view the source version of this press release, please visit https://www.newsfilecorp.com/release/126038