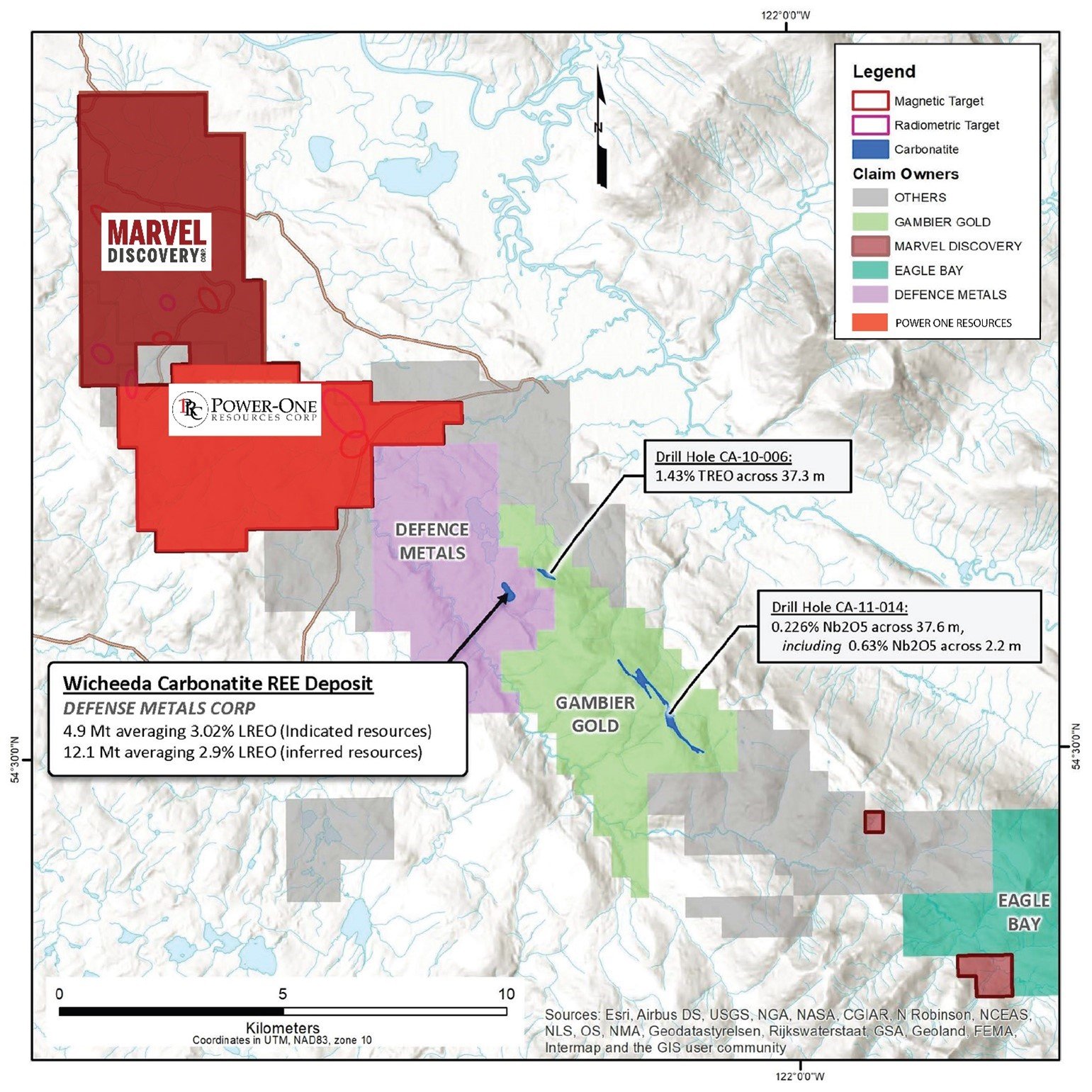 VANCOUVER, BC / ACCESSWIRE / May 4, 2022 / Marvel Discovery Corp. (TSX-V: MARV)(FRA:O4T)(OTCQB:MARVF); (the “Company”) is pleased to report on the recent activities by our neighbor Defence Metals (DEFN.V) at their Wicheeda Carbonatite Deposit. The Wicheeda Deposit hosts 4.89 million tonnes (Mt) at 3.02% light rare earth oxide (LREO) and an inferred resource of 12.1 Mt at 2.90 LREO using a cut off 1.5% total metal (see “technical report on the Wicheeda, Property, British Columbia Canada” with an effective date June 27th, 2020). Management cautions that past results or discoveries on proximal properties (ie: the Wicheeda Carbonatite) may not be indicative of the presence of mineralization on the Company’s project.

Marvel and Defense Metals Wicheeda projects are located 80km northeast of the city of Prince George British Columbia. Marvel’s property of interest lies immediately northwest of Defense Metals ground and covers 2,135 hectares. Power-One, a Marvel portfolio company, (SPINCO) holds the surrounding claims for total of 4,274 hectares. (See figure 1 page 2) The property was acquired due to its oval aeromagnetic feature similar to the magnetic signature that hosts the Wicheeda Carbonatite.

“The Rocky Mountain Rare Earth Metal Belt is quickly becoming recognized as a host to REE’s,” stated Karim Rayani President Chief Executive Officer. “Marvel and equity holding Power-One Resources (SPINCO) now control a sizeable area of influence in the camp of approx. 4,300 hectares. Recent drilling by Defense reports the longest high-grade intercept to date of 3.09 % total rare earth oxide over 250m -including 3.92% over 80m. Marvel is uniquely positioned, covering a similar looking magnetic signature as the Wicheeda Carbonatite Deposit. We are awaiting a final compilation of all datasets and interpretation of geophysical reports to mobilize field crews for this summer’s work program.”

Once the Company has completed a geophysical interpretation and review of all government datasets covering the entire property position, and that of the surrounding area to understand the structural and mineralizing environment. The Company will mobilize field crews to follow-up on all priority targets planned to start this summer.

The Nechalacho REE Project in the Northwest Territories is set to be the lowest cost producer of mixed Rare Earth Oxide outside of China. A number of projects throughout Canada are developing sizeable resources, and the Wicheeda is considered one of the larger deposits within Canada for Light Rare Earths (LREO).

Manufacturing permanent magnets is the largest global use of REE’s accounting for 29% of forecasted demand, China lead by producing 140,000 tonnes of REE’s in 2020, accounting for almost 60% of global production. The Global rare earth market is projected to grow from current USD 5.3 billion to USD 9.6 billion by 2026. (Ref 3)

Ref1 What are rare earths? (cheetahresources.com)

The technical content of this news release has been reviewed and approved by Mike Kilbourne, P.Geo., who is a Qualified Person as defined by National Instrument 43-101, Standards of Disclosure for Mineral Projects. The QP has not completed sufficient work to verify the historic information on the Properties, particularly regarding historical exploration, neighbouring companies, and government geological work. The information provides an indication of the exploration potential of the Property but may not be representative of expected results.