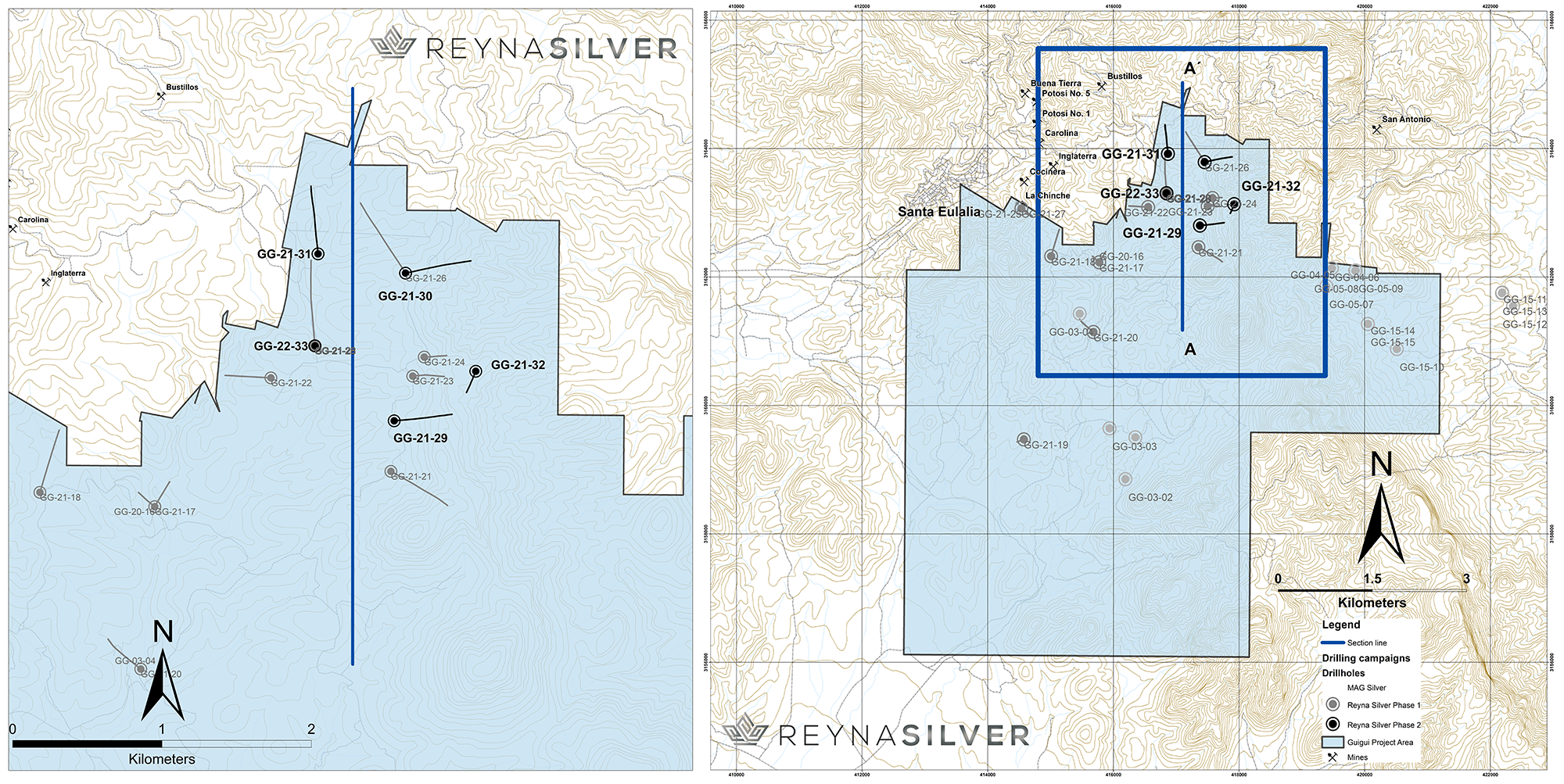 VANCOUVER, BC and HONG KONG / ACCESSWIRE / April 7, 2022 / Reyna Silver Corp. (TSXV:RSLV)(OTCQX:RSNVF)(FRA:4ZC) (“Reyna” or the “Company“) is pleased to report results from its 8,000 m Phase 2 drilling program on its 100% owned Guigui Project in the heart of the historic more than 500 million ounce Santa Eulalia Silver District in central Chihuahua-Mexico’s largest Carbonate Replacement Deposit (CRD). Reyna’s exploration is focused on finding the source of the system and believes that Phase 1 Hole GG21-28, which cut multi-stage Silver-Copper-Zinc-Lead sulphide-mineralized skarn (high-temperature alteration) overprinted on a previously unknown highly-felsic intrusive lies close to that inferred source (See Press Release of Oct., 28, 2021).

Phase 2 follow-up drilling was designed with two goals. The first was to take aggressive step-outs from GG21-28 to determine the extent and zoning of that mineralized skarn. Four of the five Phase 2 holes cut intrusive-hosted mineralized skarn very similar to that in GG21-28 (Table 1), significantly increasing confidence in the expanded mineralization footprint, which now covers an area of at least 0.5 km2. The second important focus was to look within the overlying 1,200m thick historically productive limestone sequence for mineralization potentially sourced from the mineralized skarn. Silver-bearing sulphide veins ranging from a few centimetres to 4.5 metres wide (core length) cutting massive limestone were identified in 4 of 5 holes between about 340 and 720m above the mineralized skarn zone (Table 2). These are all high-angle structures that closely resemble “feeder” or “bleeder” structures that extend to and from major replacement bodies in the historic mines and may provide important mineralization vectors moving forward. Phase 3 will focus on seeking massive sulphide replacement mineralization related to these upper-level structures while continuing to zero in on the source of the district.

Highlights from the Phase 2 Drilling Program:

“With Hole 28, we were excited to discover strongly mineralized skarn and are delighted that our aggressive Phase 2 step-outs expanded the skarn footprint so dramatically. We are equally pleased to have cut multiple high-angle silver-rich veins higher in these holes. These were probably fed by the underlying skarns and are the type of structures the old-timers chased towards the district’s famous silver-rich orebodies,” said Jorge Ramiro Monroy, CEO of Reyna Silver. “Phase 2 has given us multiple targets and areas of interest to follow up, which validates our commitment to true district-scale exploration. We have already begun the groundwork in preparation for our minimum 8,000m, fully-financed, Phase 3 drilling campaign.”

“When we’re exploring at district-scale, we follow up a discovery hole like Hole 28 with widely spaced drilling to determine the variations and scope of the mineralization. A 0.5 km2 footprint of repeatedly mineralized skarn with multiple overlying mineralized structures is extremely encouraging and gives us two exciting exploration targets to pursue,” said Dr. Peter Megaw, Chief Exploration Advisor for Reyna Silver. “The first thing is to try following the high-level structures into high-grade, limestone-hosted massive sulphide mineralization like that mined historically in the district. Then we can seek high-volume mineralized skarn related to the district’s source intrusion – a key piece of the puzzle and a principal component of our ongoing exploration program. We are currently concatenating all the data to strategically target Phase 3 drilling.”

Phase 2 was an aggressive follow-up of Hole GG21-28, which intersected multi-stage Silver-Copper-Zinc-Lead sulphide-mineralized skarn (high-temperature alteration) overprinted on a previously unknown highly-felsic intrusive (See Press Release of XX/YY 2022). Phase 2 consisted of 5 holes, GG21-29 to GG21-33, totaling 8,562m drilled in a 50 ha (0.5km2) area within Reyna’s 4,750 ha (47.5 km2) Guigui concession package (Figure 1). Working outwards from Hole 21-28, targets were designed to determine the extent and zoning of that mineralized skarn by integrating the results of Phase 1 with detailed surface mapping and geochemistry, airborne geophysics, and hyperspectral satellite imagery all plugged into our district exploration model based on 300 years of historic underground mining. After the completion of each hole, results were remodeled, and targets were modified accordingly. Relative to Hole GG21-28: Hole GG21-30 was 777m east, Hole GG21-31 was 615m north, Hole GG21-32 was 1089m east, and Hole GG21-33 was drilled from the same pad (Figure 1). Notable results from Holes GG21-30 to GG21-33 are presented in Table 3

The two near end-members of the CRD spectrum emerging from Phases 1 and 2 provide critical tools for focusing ongoing exploration (See Figure 3 for a simplified CRD model). Phase 3 will focus on the upper-level structures potentially indicative of massive replacement mineralization while continuing to hunt for the source of the district.

Compositionally, texturally, and geologically the intrusive-hosted mineralized skarn found in Phase 2 drilling appears to be an extension of the mineralization discovered in Hole GG21-28- expanding the known footprint of mineralized skarn to at least 0.5 km2. A key characteristic of large CRD systems is the presence of multiple, progressively differentiated intrusive stages fed from a source intrusion. Discovery hole GG21-28, plus four of the Phase 2 holes, cut a previously unknown quartz-eye rhyolite, a highly evolved style of intrusive, probably closely linked to the source intrusion and affected by strong, multi-stage mineralization and skarn alteration caused by hydrothermal fluids emanating from it. Compositionally, the mineralized skarn continues to look very similar to the mineralized skarn and sulfide replacement mineralization exploited in the San Antonio mine 2 km east of the Hole GG21-28 area. These similarities include multi-stage epidote-dominated skarn alteration and elevated tungsten and indium values (Hole GG21-31 anomalies: Tungsten 330-550 ppm; Indium 17-68 ppm). Features like these seen in the expanded mineralized skarn footprint should help in vectoring to the source, where mineralization is expected to be larger scale and more pervasive.

Importantly, silver-rich distal-style sulphide veins, ranging in width from 1 cm to over 4.5 metres were discovered well above the mineralized skarn in four of the holes drilled in Phase 2. The largest of these silver-bearing sulphide veins were cut in Holes GG21-30, GG21-31, GG21-32, and GG21-33 and lie 342m, 478m, 719m, and 435m respectively above the intrusive skarn (Table2). Numerous narrower examples were also found in these holes and Hole GG21-29. These high-angle veins show multiple stages of manganoan “fugitive calcite” veining bracketing silver-bearing sulphide mineralization stages. The silver values and trace metal geochemistry indicate that they are similar to the “fluid escape structures” typically found distal to massive sulphide CRD mineralization. These types of structures are classified as “feeder” or “bleeder” structures, depending on whether they “fed” massive sulphide mineralization or “bled” mineralizing fluids outwards from them. Similar structures were historically used by the district’s miners to lead to the chimney-manto mineralization exploited in the district’s mines.

Figure 3. Simplified CRD system model. The source intrusion and related proximal mineralization shown within the highlighted area have yet to be found in the Santa Eulalia District and are the principal focus of Reyna Silver’s exploration program. However, the potential for additional manto and chimney-style massive sulphide mineralization in the limestone outboard of the source zone remains high and is an equally important exploration focus.

Reyna Silver follows industry standard procedures for diamond core drilling and sample analysis. Drilling is carried out using NQ and HQ size tooling. Drill core is cut in half using a diamond rock saw with one-half of the core taken as an analytical sample and the other half kept for reference. Sample intervals are generally 0.2 to 1.5 m; producing samples weighing between 0.2 and 8 kg. Half-core samples are security sealed and delivered directly by Reyna Silver’s contract geological team to the internationally certified ALS Minerals laboratory facilities in Chihuahua City where the samples are prepared and shipped to Vancouver, Canada for analysis. Assaying is done by ALS in Canada under an ISO 1702 Quality management system. Samples are fire assayed for Au and analyzed for Ag and multi-elements using method code ME-MS41 following an aqua regia digestion. Overlimits are analyzed using the most appropriate method. Multi-element geochemical standards and blanks or duplicates are inserted systematically into the drill core sampling series to monitor lab performance.

Dr. Peter Megaw, Ph.D., C.P.G., the Company’s Chief Exploration Advisor and Qualified Person, reviewed the technical aspects of exploration projects described herein and is responsible for the design and conduct of the exploration programs and the verification and quality assurance of analytical results. Dr. Megaw is not independent as he and/or companies with which he is affiliated hold Net Smelter Royalties on the Guigui and Batopilas Projects that predate Reyna Silver acquiring them.

Reyna Silver Corp. (TSXV: RSLV) is a growth-oriented junior exploration and development company focused on exploring for high-grade, district-scale silver deposits in Mexico and USA. Reyna’s principal properties are the Guigui and Batopilas Properties in Chihuahua, Mexico. Guigui covers the interpreted source area for the Santa Eulalia Carbonate Replacement District (CRD) and Batopilas covers most of Mexico’s historically highest-grade silver system. The Company also has an option to acquire 80% of the Medicine Springs property in Nevada, USA as well as the early stage La Durazno and Matilde and La Reyna mineral properties in Mexico.