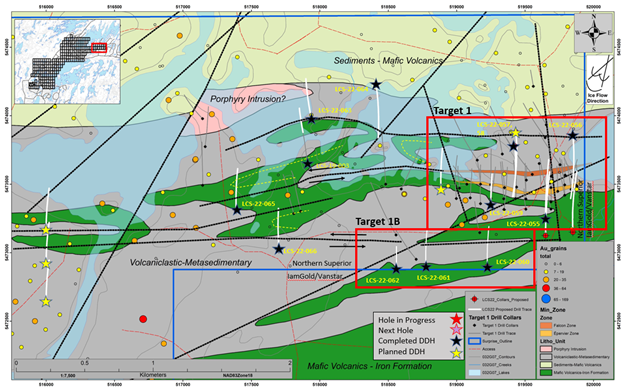 DEMONSTRATES POTENTIAL OF HIGHER-GRADE GOLD MATERIAL AT DEPTH with 5.19g/t over 3m and EXTENDS GOLD MINERALIZATION AT TARGET 1B

These first 4 holes of this program were designed to test the depth extension and vertical continuity of the Falcon Gold Zone (FGZ). All 4 holes were successful in intersecting gold bearing zones in the FGZ highlighted by Hole LCS22-58 which intersected 1.09g/t over 41m and hole LCS22-56 intersecting significant thickness with 0.71g over 41.5m including 1.57g/t over 11.57m increasing the vertical continuity of the FGZ by 93m to 381.7m (Figure 2; Table 1)

The first 4 core drill holes of this program were completed over a strike length of 662m, a section of the 900m strike length outlined for the FGZ thus far. These holes were designed to test the extension of the vertical continuity of FGZ. Holes LCS22-055, 56 and 58 and 59 were drilled to a true vertical depth “TVD” of 321m, 372m and 381m and 240m,respectively (Hole LCS22-057 was abandoned at 69.0m due to alignment issues). The FGZ remains open at depth and a series of deeper step down holes have already been identified.

The observations and assay results from these first four holes continue to demonstrate the remarkable lateral and vertical continuity of the FGZ, highlighted by a 100% “hit” rate from all 33 holes drilled into the FGZ thus far, over 900m of strike length and now a vertical depth of 381m demonstrating continued vertical continuity and extension of the FGZ. This has very positive implications for eventual volumes of mineralized material. Multiple holes drilled within the 900m of strike length defined assayed over 1.00 g/t Au (Figure 3).

The first 4 core drill holes of this program also succeeded in establishing the potential of higher-grade gold-bearing material occurring at depth, highlighted by an intersection of 5.19g/t Au over 3.0m (LCS22-058; Table 1). Compilation of gold assay data from all holes drilled into the FGZ to date suggest the presence of at least two high-grade gold-bearing zones plunging to the west within the FGZ (Figure 4).

LCS22-059 intersected an interval of 0.62g/t Au over 19.7m (Table 1), which importantly documented a strong molybdenite presence (Figure 4). A similar, strong molybdenite signature, observed in FGZ core elsewhere within Target 1 often produced higher gold and silver grades (Table 2). As such, an additional core drill hole to test this area of the system is warranted as this area looks quite promising from a geological perspective.

Drill hole LCS22-055 returned lower than average grades for the FGZ due to the fact it deviated west of its intended target (Figure 4). As such, it missed an area where higher grade material is thought to exist. Thus another hole closer to the intended target area is warranted.

The FGZ is a major, near-surface new discovery made by Northern Superior over the past 18 months and can be traced west over 900m from the eastern boundary of the property, on strike with Vanstar/ IAMGold’s 3.2M ounces at 1.02 g/t Au Nelligan gold deposit*(see Figure 2, Northern Superior press release, August 17, 2021). The FGZ remains open to the west and at depth.

Extension of Gold Mineralization at Target 1B

Establishing the potential for an additional gold-bearing system at Target 1B, south of and parallel to the FGZ, Target 1 (Figure 1). This additional system was intersected by 3 holes associated with this program with hole LCS 22-061 intersecting 0.90 g/t over 13.1m following up on hole LCS20-21 completed in 2020 (0.29g/t Au over 23.1m; see Northern Superior press release January 21, 2021). Given that the three core drill holes from this program were purely exploration and spaced over 760m, each of which intersected gold-bearing material across such a strike length, at a relatively shallow depth is encouraging and warrants further testing. These potential satellite parallel systems would be consistent with what is seen at the neighboring Nelligan deposit to the west (Table 3).

Dr. T.F. Morris, President and CEO states: “We are very pleased to have achieved the goals set out for this program. The ability to successfully extend the vertical continuity of FGZ zone another 93mto381.7m with gold grades consistent with those previously reported, points to the robust nature of the FGZ along 900m of strike length. That we have also demonstrated the potential of higher-grade gold material at depth within the within the system is also strongly encouraging. These observations, coupled with the fact that the system remains open along strike to the west and at depth makes the FGZ a truly exciting discovery and opportunity.”

“We are also looking very much forward to seeing what assay results from the remaining 5 holes, west of the FGZ, reveal. Where we hope to see a continued westward extension of the FGZ and/ or new additional areas of gold mineralization.”

Table 3. Summary of anomalous gold assays, Target 1B. True width is estimated to be between 70 and 85% of core length.

An extensive and aggressive property wide exploration program is currently underway over the whole property, the purpose of which is to identify additional areas of gold mineralization. This mapping and prospecting program is supported through recommendations proposed by Orix Geosciences who completed a property-wide geoscientific compilation and interpretation of the Lac Surprise property. In addition, interpretations made from previous drone-supported airborne magnetic surveys (see Northern Superior press release April 19th, 2021) and an Induced Polar geophysical survey over the Amber area of the property (see Northern Superior press release March 14, 2022) will also direct the bedrock mapping and prospecting programs.

Sarah Dean (P.Geo.) is a Qualified Person (“QP”) within the meaning of National Instrument 43-101. Ms. Dean has reviewed, and approved information disclosed in this press release related to the Lac Surprise program.

Northern Superior is a reporting issuer in British Columbia, Alberta, Ontario and Québec, and trades on the TSX Venture Exchange under the symbol SUP, and the OTCQB Venture Market under the symbol NSUPF.

Please refer to Northern Superior news available on the Company’s website (www.nsuperior.com) and on SEDAR (www.sedar.com) or contact: 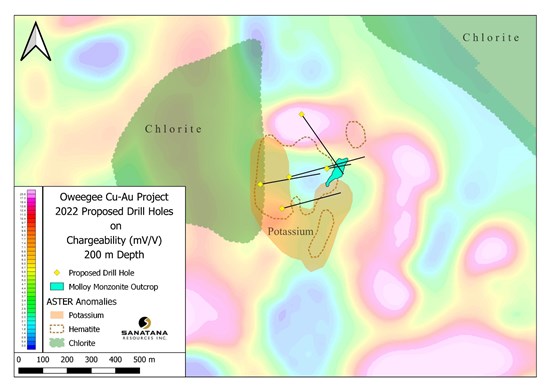 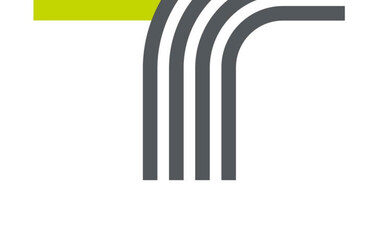