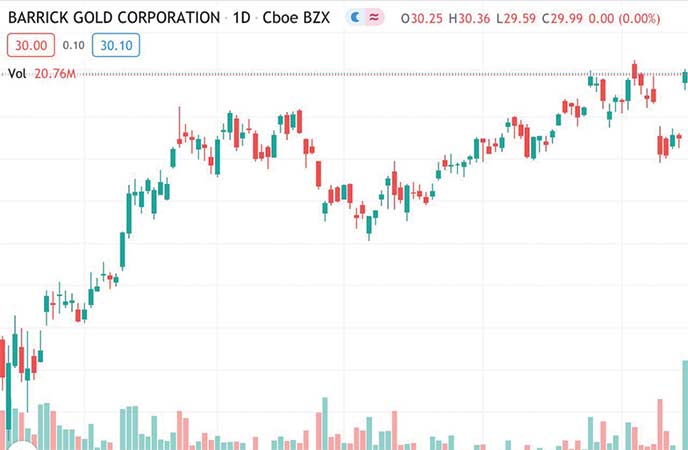 Can Gold Stocks Get a Boost From Powell’s Latest Announcement?

Gold stocks have been some of the most popular investments during the COVID pandemic. On Wednesday, September 16th, the Federal Reserve announced that it would be keeping interest rates near zero percent. This is not only major news for gold stocks but the U.S. economy as a whole.

Analysts have stated that this low-interest rate could continue through 2023, signaling potential economic prosperity on the horizon. In 2008, when the Fed lowered interest rates to zero following the housing crash, the economy quickly began to pick up. Only a few years later, gold stocks and the rest of the stock market had bounced back up to its pre-recession numbers. While we may have avoided a recession, for the most part, this time around, there’s no doubt that low-interest rates are a major factor for economic success. The Fed stated that its goal is to “maintain an accommodative stance of monetary policy.”

In late August, gold prices hit a high of $2,089.20 per ounce before correcting slightly. While lowered interest rates are a good thing, they could signal economic and geopolitical turmoil. And when events like this shock the economy, investors tend to turn to gold. This is because gold is a solid store of wealth when currencies are threatened by inflation and economies are in decline. Gold has intrinsic value, unlike fiat currency which makes it a safer way to ensure one’s assets are stable especially in a low rate environment.

Barrick Gold Corp. (GOLD Stock Report) is one of the major gainers for the third week of September. On Monday, September 13th, GOLD stock surged 12%. This jump in value can be attributed to the big buying that has come into the stock. Earlier this year, money magnate Warren Buffett’s Berkshire Hathaway had purchased a sizable stake in the company. In the past three months, Berkshire Hathaway has purchased more than $560 million worth of mining stocks. This includes the purchasing of a large stake in Barrick Gold stock.

Year to date, Barrick Gold has shot up by over 45% which is very substantial for any gold mining stock. As a gold mining company with positive cash flow, Barrick Gold has been met with a large amount of critical appeal from investors. With COVID still running rampant around the world, investors are continuously turning to major gold stocks like Barrick, to stabilize their portfolios. In 2019, Barrick Gold merged with Randgold creating a unique industry partnership. With the expertise of the two companies, Barrick has been able to tackle expansion and increasing its gold reserve size.

While production amount is always a factor, the production price per ounce of gold is also important. Barrick has stated that its goal is to be producing gold at around $900 per ounce within the next year or so. In addition, Barrick announced that it plans to produce roughly 5 million ounces of gold within the next five years. All of these factors add up to make Barrick Gold an intriguing gold stock to watch.

Kirkland Lake Gold Ltd. (KL Stock Report) is one of the majors in the gold mining industry. With a market cap of roughly $15 billion as of mid-September, Kirkland Lake is focused on producing high quantities of gold at lower costs than other similar businesses. This includes low-cost mining projects in both Canada and Australia.

Back in 2016, Kirkland Lake acquired the Australian gold giant Newmarket Gold for just shy of $800 million. In addition, it announced that it had completed the acquisition of Detour Gold for roughly $3.7 billion. These acquisitions show that Kirkland Lake is working to expand its gold footprint greatly. While many other gold companies are working to mine existing projects, Kirkland Gold has taken on acquisitions as a way to increase its size.

[Read More] Should These 4 Gold Stocks Be On Your List In September 2020?

Kirkland recently announced that it has entered into a joint agreement with Wallbridge Mining over its Quebec based Detour East mining project. Under the agreement, Kirkland will gain a 75% interest in Detour East after contributing $35 million on the exploration of the site. The CEO of Wallbridge, Marz Kord stated that this agreement is “strategic” and will allow the two to explore the property in greater depth. With so many projects going for it, Kirkland Lake continues to be a stronghold amongst gold mining stocks.

Kinross Gold Corp. (KGC Stock Report) has gained this year. When we assess the value of potential gold stocks to buy, we have to look at both the financials and what the company is doing to ensure future success. Fundamentally, Kinross Gold has several factors that make it an interesting call.

For one, Kinross has managed to continue growing its EPS at a substantial rate. Historically, Kinross has posted an EPS growth rate of around 64%. With the industry average at around 41%, Kinross looks quite good in this regard. For 2020, analysts expect Kinross’ EPS to hit 99%. While this may seem high, its performance this year shows that there is a lot of potential to achieve these goals.

The company has several mining projects currently underway in North and South America. In these mines, Kinross has been able to achieve low costs while also managing a high output of gold. Year over year, Kinross has managed to grow its average realized price of gold by 31% in its most recent second quarter. As a top gold mining stock by market cap, Kinross Gold continues to lead in its efforts to grow its business.

Franco Nevada Corp. (FNV Stock Report) is a gold producer that has worked to earn a top spot in the industry. In its most recent second quarter, Franco Nevada announced revenues of around $195 million. This represents an almost 15% increase from the same quarter of the previous year. In its second quarter, the company reported that it sold as much as 104,000 ounces of gold. In addition, it saw its net income shoot up by over 47% year over year to around $94 million.

These numbers help to illustrate the sheer size of Franco Nevada in relation to other gold mining stocks. The company has several projects that it is working on around the world. This includes the Americas, Australia, Europe, and Africa. In addition to conducting its own mining operations, Franco Nevada works as a royalty and streaming business as well. This means that it finds mining operations in exchange for the right to purchase precious metals at lowered prices.

Because Franco is so broad in its business practices, many investors believe that it is a very diversified gold stock to watch. As of 2020, Franco Nevada has investments in over 290 mines. This is more than any other gold mining company in the industry.