A Golden Opportunity: How To Invest For The Coming Stagflation

Now that even hardened permabulls are forced to pick between two poisons and debate whether the US is sliding into stagflation or merely recession, last week Deutsche Bank’s Jim Reid and Henry Allen published their latest must-read note, “Investing during Stagflation: What happened in the 1970s” (available to pro subscribers in the usual place), a follow-up to their note back in October last year comparing the 2020s to the 1970s (which we discussed extensively here at the time).

While Reid hedges that the decade is still young, he asks what if inflation stays around for much of the next few years? What should we expect from returns?

While we will present a more extensive answer tomorrow when we dissect his recent report, the short answer is that for traditional financial assets like bonds and equities one would expect real wealth destruction rather than the massive real wealth creation seen over the last four decades.

On the other end, commodities will be a far better bet, although given the run up already seen so far this decade, it is possible that the easy gains have already been made although we doubt that because as we noted recently, quoting from BofA, “Energy’s weight is now ~5%, the sector is still 30% underweight. The pain trade in Energy is up.””

However, Gold and Silver haven’t made much progress over the last two years so if the playbook follows the 1970s they are the standout cheap asset from this starting point, according to Reid, who concludes that while “history never exactly repeats it provides a framework as to how to think about the next few years if inflation remains high even after a Fed-induced recession.”

Two words have battled for supremacy in investors’ minds over the course of the year: ‘Recession’ and ‘inflation’. The higher US inflation climbs,… 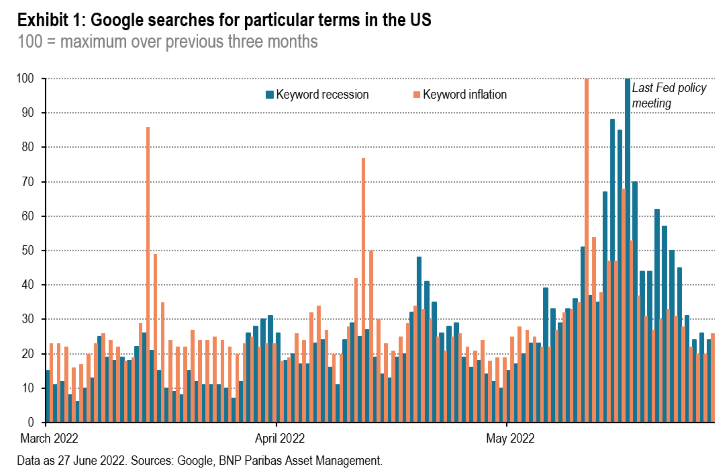