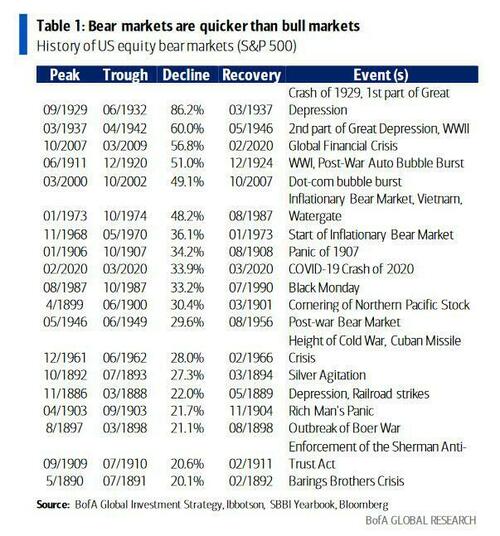 A Look At The Last Five US Recessions

By Nicholas Colas of DataTrek Research

The first job I had after graduating business school in 1991 was covering the US auto industry at the old First Boston, now Credit Suisse. This was just after the 1990 recession, and the Big Three were all on the ropes. Light vehicle demand was off +30 percent from its 1980s highs. The Japanese makers were all gaining share. Chrysler was essentially bankrupt, as were some of its major suppliers. Investors had left auto stocks for dead.

Fast forward a year, and US automaker/supplier stocks were market leadership. Chrysler had doubled, albeit from $5/share to $10. Vehicle demand was starting to recover. Incremental margins on new vehicles – minivans and SUVS – were fantastic. Every quarter saw these companies beat estimates, often by a wide margin. The lesson here is that recessions, while painful, offer investors tremendous money-making opportunities.

In fact, every recession and market crisis since 1973 tells the same story about US stocks generally, not just grimy cyclical names:

On its face, this pattern makes no sense. Why should investors so dramatically reset their expectations for future cash flows just because of a recession? Granted, bull markets always see some speculative excess. Stock prices going into recessionary bear markets are always too high simply because of that. But recessions are not exactly a surprise. Their timing is uncertain, of course. But everyone knows they occur, and that the economy eventually recovers, and US corporate earnings go on to make new highs.

The standard explanation is that markets cannot be sure of where earnings bottom or how long it will take for them to fully recover. Fair enough, as this data of S&P 500 earnings shows:

On average, therefore, it takes 3-4 years for S&P 500 earnings power to recover fully after a recession and in the interim aggregate EPS can drop by anywhere from 24 – 57 percent. The latter is a huge range and merits some further explanation:

Analysts call this operating leverage, and I can tell you from decades of experience that it is ferociously hard to calculate through a recession and into a recovery. Here’s why:

Pulling this discussion into the present day, all we know for sure is that equity markets don’t believe S&P 500 earnings will grow over the near term from their recent run rate of $54/share ($216/year). With the index’s close of 3,667 today, we are trading at 17.0x current earnings. That’s a fair multiple, spot on the 10-year average. This implies the market believes incremental revenues and margins (operating leverage) net to zero percent growth over the next year.

The history of earnings during recessions can give us a sense of where US large caps might bottom. Here are 3 scenarios, each using the same 18x multiple, not the 17x long-run average, for trough earnings since markets will assume strong incremental earnings leverage off the bottom for the reasons described earlier.

These levels are not supposed to scare you; I mean them as a reason for hope. As profoundly difficult as the current investment environment is, it will end. Yes, inflation is a problem and yes, Fed policy is aggressive as a result. Stocks are bearing the brunt of the uncertainties those issues create.

A recession is likely; stock market volatility is very clear on that point, as were Fed Chair Powell’s comments yesterday. Companies will cut costs. Incremental margins will be awful for a quarter or two, but then improve dramatically. S&P earnings will recover and reach new highs in a few years’ time. This is how the pattern has worked across my +30-year career and I see no reason to think it will be different in the next cycle.

Takeaway: traders have a saying that sounds a bit wishy-washy but actually has some wisdom to it – “It’s too late to sell and too early to buy”. There will be some great returns once stocks settle out. The job now is to wait for the right valuations and catalysts to catch that move.