Oil prices have settled in above $100 a barrel … the macro forces that will keep them elevated … U.S. oil companies are minting a fortune at $100+ oil

As I write, West Texas Intermediate Crude (WTIC) is at nearly $115 a barrel.

It appears to be following the path that we suggested it would in recent Digests. Specifically, it’s beginning to push north out of a chart pattern called a pennant.

Below is how that looks. We’ve added trendlines showing the pennant shape, as well as a green circle highlighting the bullish breakout.

Though prices could reverse and continue tightening in this pennant pattern for a bit longer, we anticipate this eventually resolves with a bullish breakout for one simple reason…

There’s a serious imbalance between supply and demand that’s not going away.

Our macro expert Eric Fry has been highlighting opportunities in oil for months.

Here’s Eric from his latest issue of Investment Report:

As I’ve pointed out previously, the world cannot simply flip a switch to boost oil production.

According to Rystad Energy, global investments in oil and gas exploration and production have plummeted by about 65% since the 2014 peak. 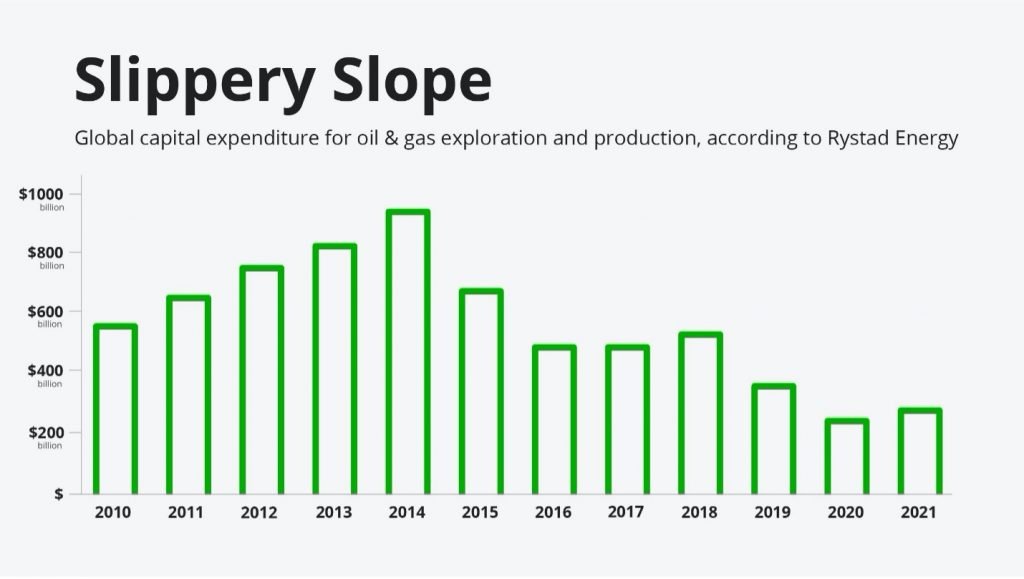 This prolonged underinvestment has reduced global crude production capacity, which is a big part of the reason why oil and gas prices have been heading hitting multi-year highs.

It’s worth noting that other experts are in agreement with Eric about the nature and scope of this problem.

I am a dinosaur, but I have never seen these things.

The world needs to wake up to an existing reality. The world is running out of energy capacity at all levels.

I’ve been doing this for 30 years and I’ve never seen markets like this. This is a molecule crisis.

We’re out of everything, I don’t care if it’s oil, gas, coal, copper, aluminum, you name it, we’re out of it.

This will be a complete import ban on all Russian oil, seaborne and pipeline, crude and refined.

We will make sure that we phase out Russian oil in an orderly fashion in a way that allows us and our partners to secure alternative supply routes and minimizes the impact on global markets.

Now, there are some hiccups with this, as Hungary and Slovakia say it will take several years to replace Russian oil imports without major damage to their economies. So, they’re not signed onboard yet.

However, there’s likely to be some sort of agreement reached, potentially including concessions to Hungary and Slovakia.

Even if not, individual countries such as Germany are already making plans to become energy independent of Russia.

Of course, the question is: Where will Europe turn for the same energy imports at the same prices?

“There are three countries who can replace Russian crude within the short term: Iraq, Libya and Iran, but each of these three have their own problems,” says [Andrei Belyi, a professor in energy law and policy at the University of Eastern Finland and founder of energy consultancy Balesene OÜ].

Iraq and Libya remain unstable. Iran itself is under sanctions. Would it be credible to unlock Iran to lock Russia? Or is this releasing one criminal to catch another?

“In the mid-term – a year and more – more suppliers will certainly come to the market,” he adds. “Those can include OPEC, Norway, the UK, North America and Africa. Some volumes will come from Azerbaijan and Kazakhstan. The high oil price means more oil can be produced from more difficult areas. We just need some time” …

What is clear is that however this pans out, citizens will feel the effects. Skyrocketing energy prices will remain volatile and analysts predict the oil embargo will exacerbate inflation.

***Now, keep in mind that oil’s price has remained high despite a massive drop in demand due to China lockdowns

Meanwhile, industrial production was supposed to post a slight increase but it ended up falling 2.9%.

As to oil, April saw China process 11% less oil, with daily throughput coming in at the lowest level since March of 2020.

This is a huge, yet artificial, slowdown in oil demand.

Sure, these lockdowns could remain in place for longer than expected, but they will end eventually (current reports suggest Shanghai is targeting June 1). And when they do, how will the renewed demand impact prices?

It’s just another massive tailwind that will help keep prices elevated for the foreseeable future.

***The historical case for a sustained bull market in oil

$100 oil is not a fluke or a fleeting blip; it is a powerful megatrend that could propel oil-related stocks to surprisingly large gains.

From a historical perspective, oil stocks certainly have a lot of “room to grow.” That’s because oil stocks, like most resource-related stocks, tend to go through extreme boom-bust cycles. They do not typically trend higher over time like non-resource stocks do.

Because of this manic tendency, oil stocks, expressed as a percentage of the S&P 500, oscillate from extreme lows to extreme highs and back again.

In illustrating this, Eric points toward the early 1970s, when energy stocks represented just 7% of the S&P 500 Index. But as oil stocks soared that decade, their slice of the S&P swelled to 28% by 1980.

From that peak, the percentage fell back to 10% by the mid-1980s, only to reverse and start the cycle all over again.

Eric provides the chart below, showing how the energy sector’s percentage of the S&P is near historic lows today. 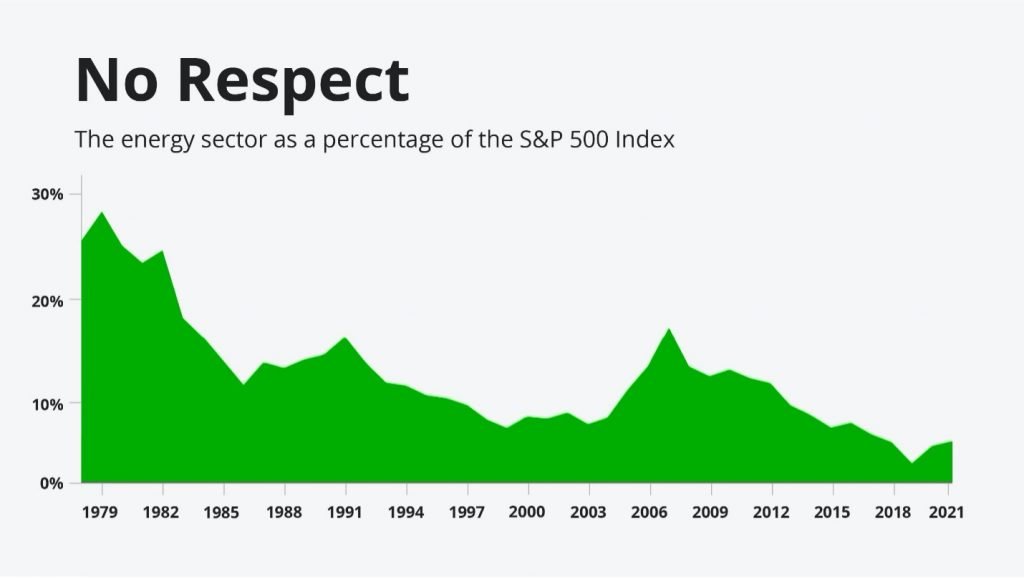 By October of 2020, oil stocks represented less than 2% of the S&P 500 index! Since then, the rallying energy sector has muscled its way up to a 4% weighting.

But if oil stocks are to reach their prior peak they would have to quadruple from current levels, all else being equal.

No overarching “Law of Markets” guarantees that oil stocks will recapture that high ground, but that potential is real.

***As Eric has pointed out, oil prices don’t have to continue surging higher for oil and energy stocks to make fistfuls of profits

At the end of the day, making money with oil stocks is based on two simple variables: one, what’s the breakeven cost for oil producers to bring oil out of the ground and prepare it for use, and; two, what’s the market price?

As we noted earlier, WTI crude is trading at roughly $115 a barrel today.

What’s its breakeven price in the Eagle Ford region for existing wells?

Even if we adjust that price to account for a new well, which is about $48, that’s still miles below the current market price.

It’s not just Eagle Ford. In the Permian basin, the existing-well and new-well breakeven prices are $29 and $51 respectively. For broader, non-shale U.S. regions, the average numbers are $38 and $60.

As you can see, there’s a huge margin between these out-of-ground costs and market prices. And that’s resulting in what Raoul LeBlanc, head of S&P’s North American oil and gas division, calls “a tsunami of cash.”

But let’s put some shape to this tsunami.

According to Rystad Energy, America’s oil and gas operators are raking in about $180 billion in free cash flow this year, given current prices. Is that a lot?

Not only is that a lot, it’s more than the total amount earned by U.S. operators over the past 20 years.

Even if oil prices fall substantially – which macro dynamics do not suggest will happen soon – a basic profit/cost analysis shows these thick margins will keep profits robust for the foreseeable future.

On the other hand, consider how those margins will be impacted if oil keeps rising. In fact, Morgan Stanley’s chief commodities strategist sees oil at $120 a barrel.

But prices could go far higher.

On that note, I’ll let Eric take us out as he talks about the reality of Big Oil leaving Russia, and the potential impact on global prices:

The disappearance of 1 million… 2 million… even 3 million barrels of oil per day from the global market means oil could rise to $140 per barrel…. then $160 per barrel… and potentially $200 barrel and beyond.

Even if Vladimir Putin were to wake up tomorrow and decide to exit Ukraine completely, Big Oil would not return to Russia for many years.

The horse is out of the barn. The cake is already baked.

If a cease-fire was declared tomorrow, oil might stage a short-term decline as people become relieved the war is ending, but the long-term problem would soon reassert itself…

Big Oil ain’t coming back for a long time.

The post A âTsunami of Cashâ for Oil Investors appeared first on InvestorPlace.