As markets have recovered from their mid-March lows, there are many who are puzzled by the rise.  For some, the skepticism comes from the disconnect with macroeconomic numbers that are abysmal, as unemployment claims climb into the tens of millions and consumer confidence hovers around historic lows.  I will spend the first part of this section arguing that this reflects a fundamental misunderstanding of what markets try to do, and a misreading of history. For others, the question is whether markets are adequately reflecting the potential for long term damage to earnings and cash flows, as well as the cost of defaults,  from this crisis. Since that answer to that question lies in the eyes of the beholder, I will provide a framework for converting your fears and hopes into numbers and a value for the market.

Markets and the Economy
The notion that stock markets and economies are closely tied together is deeply held, simply because it appeals to intuition. After all, how can stocks keep going up if the economy is doing badly? While I concede that the right answer is they cannot, there are three factors that may delink the two.

To those who prefer a data-based argument, the graph below plots US stock market returns against real GDP growth in the United States, using quarterly data.

Note that there is almost no correlation between stock returns and real GDP growth contemporaneously, and while the correlation grows as you look at GDP is subsequent quarters, it is still modest even four quarters ahead. If the relationship between stock returns and measures of economic activity is weak, as both logic and the data suggest, it should be even weaker right now, where every measure of economic activity is ravaged by the crisis-driven shutdown. To those in the media and the investment community who profess to be shocked by the latest economic numbers, my question is whether you are just as shocked to see your speedometer at zero, when your car is parked in the driveway, or when your pie does not bake in an oven that is not turned on? In short, there is almost nothing of use to investors from poring over current macroeconomic data, which is one reason why markets have started ignoring them. That will change, as the economy opens up again, and markets start looking at the data for cues on how quickly it is coming back to life.
Valuing the Market
In my first viral market update, I sketched a picture of the drivers of value for the market, drawing on fundamentals. I revisited that picture and tweaked it to reflect the uncertainties that investors face about the future, broke down into near term (2020 & 2021) and the long term (in the years through 2024): 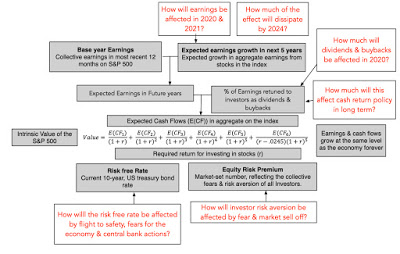 While the picture looks daunting and your estimates are fraught with uncertainty, we are now in a better position to estimate the effects than even a few weeks ago:
Using this information, I made my best judgments, assuming that earnings for the S&P 500 will be 120 in 2020 and 150 in 2021, at the more conservative end of the analyst estimates, and that dividends and buybacks would drop in 2020, the former by 20% and the latter by 50%.  I also assume that companies will return far less cash in future years, partly in response to the crisis: 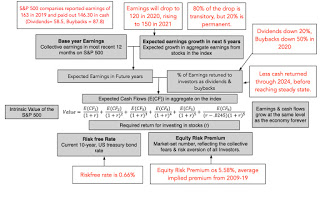 With these assumptions, I can value the index and I capture the valuation in the picture below. My estimated value for the index is about 2926, which would lead to a judgment that the index was over valued by about 6% (based upon the level on June 1, 2020). 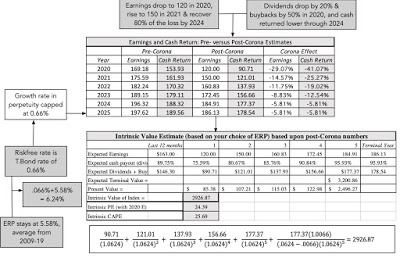 As with my March 2020 valuation, I am fully aware that my numbers are just a reflection of my story and that each of the inputs has a range around it, and I have brought in that uncertainty into a simulation below:

Note that I have centered the simulations around the median estimates of earnings for 2020 and 2021 from analysts, while building in the range in the estimates into the distributions. The median value from the simulation is 2932. On June 1, the S&P 500 was trading at close to 3100, putting it near the 80th percentile of the distribution, bolstering the “market has gotten ahead of itself” camp, but there is something here for everyone. If you are more optimistic about earnings in 2020 and 2021 than the the median analyst, and about how quickly and completely the market will recover from the crisis shock, you will arrive at a higher value than mine. If you are more pessimistic about the future, perhaps because you think the market is under estimating the likelihood of a second wave of shutdowns or a surge in company defaults, your valuations will be much lower.

In all of this discussion, you will note that I have not mentioned the Fed, and to those who are Fed-focused, it may seem like I am ignoring the elephant in the room. I have argued, for much of the last decade, that analysts and investors over estimate the effect that the Fed has on markets. To the counter that it is low interest rates that are keeping the index level high, my response is that low interest rates cut both ways, first by lowering the discount rate (and thus increasing value) but also by signaling much lower growth in the long term (which I capture by lowering growth in perpetuity to the risk free rate). In fact, in my valuation spreadsheet, I offer the option of raising interest rates to what you may believe are more normal levels over time, and you can check out the effect on value, and don’t be surprised if it is not as large as you expect it to be, since I also adjust growth rates and equity risk premiums to reflect changed rates. In fact, use the spreadsheet to and make your disagreements with me explicit, come up with your value for the index, and let’s get a crowd valuation of the S&P 500 going. (It is a google shared spreadsheet, where you can enter your estimated value for the index).

Bottom Line
Every investor has a narrative, sometimes explicit and sometimes implicit, about how the economy and markets will evolve over time. Markets reflect a collective narrative across investors, and there are times when your narrative will be at odds with that of the market. It is during those times that you will feel the urge to label markets as crazy or irrational, and to view yourself as the last sane investor left on the planet. While I understand that urge, it is my experience that projecting your personal fears and hopes on to the market, and then getting angry when the market responds differently is a recipe for frustration and dysfunctional investing.  That is not to say that markets cannot be wrong, but even if they are, a dose of humility is always in order, and there is always something that can be learned from market movements. Right now, it is true that markets are collectively more upbeat about the future than most economists/market experts, but given their relative track records over time, are you really more willing to trust the latter? I most certainly am not! 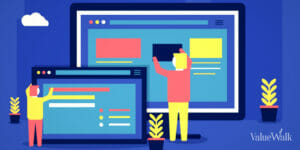