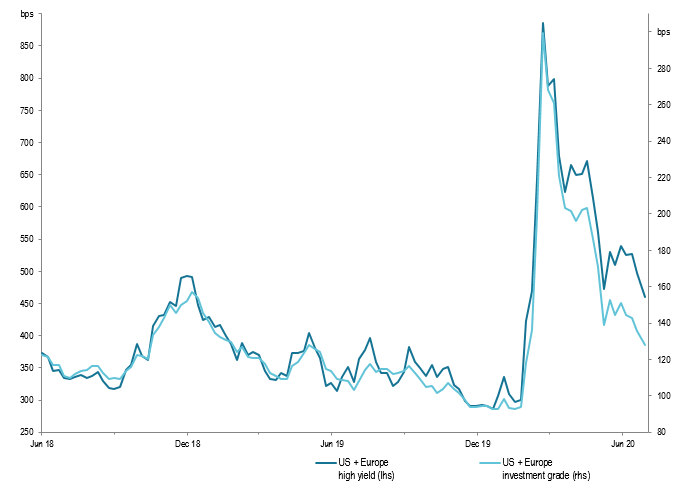 How sustainable are the major increases in sovereign debt
burdens?

Since the COVID-19 pandemic began earlier this year, central bank purchases of government bonds have driven yields, and market volatility, ever lower. As a result, 30-year UK Gilt yields are now on par with those on Japanese government bonds (JGBs). Ten-year US Treasury yields have been remarkably stable, moving in a narrow 20bp range for most of the quarter even as equity markets posted one of the biggest gains in decades. Negative yielding debt has never been more prevalent in global bond markets.

As governments have increased their bond
issuance significantly to finance the economic rescue packages, central banks
have more than kept up. In the US, the Federal Reserve’s ownership of Treasury
bonds has risen to levels not seen since the 1970s, though it is still well
behind Japan, or even Germany.

As to how sustainable sovereign debt
burdens are, the three most important criteria I see are the following:

What is the near-term outlook for the pandemic? If the current infection and death rates persist, and there is no vaccine, governments will be forced to provide further support for their economies. Countries whose bonds serve as a safe haven in times of crisis are likely to continue to see extraordinarily low absolute yields regardless of the debt load due to extraordinary demand for safe instruments as a store of value. Renewed fiscal spending will keep yields low, or drive them even lower. Of course, some governments – in the US, Japan – have the ability to print money to deflate debt, so more issuance is arguably less of an issue in those countries. Other sovereign issuers may struggle.

The second question is what will be the ultimate economic impact of the pandemic. The global economy was already weakening when the virus hit. If economic growth remains weak, the unprecedented coordination between monetary and fiscal authorities will continue, keeping rates low. Just recently, we had the eight anniversary of Mario Draghi’s ‘Bumblebee’ monetary policy comments during the euro crisis. With last week’s agreement on a European Union (EU) recovery fund, we are seeing the fiscal side of that whatever-it-takes approach. Overall, we expect central banks to continue to keep down borrowing costs – and yields. In other words, central bank buying and other demand should ensure that the low-rate regime will be maintained and may force prevailing rates lower and for longer.

Inevitably, there will come a time when high levels of fiscal spending, and with them yield levels, become unsustainable for some countries. When investors start focusing on fiscal balance sheet again, the result will be a rise in sovereign credit risk.

Could
a second wave of the virus lead to corporate bankruptcies and defaults?

Yes, if it proves difficult to get the virus under control and restrictions are in place for longer, we will see a wave of corporate bankruptcies and defaults. The forecast is now for economic growth in the US of minus 6.5% in 2020 versus plus 2-2.5% back in January.

Some companies have responded to the downturn by borrowing more. Some have become more reliant on government borrowing, some companies have continued to issue bonds, helped by the fact that central banks have stepped up and taken on the role of buyer of last resort.

In fact, we have seen three months of record corporate bond issuance. This has allowed risk premiums on high-yield bonds in the US – and Europe – to tighten significantly (see Exhibit 1 below). In some market segments, these ‘spreads’ are at the same level as in February, before the pandemic. So, I’d say there is a disconnect here.

Surely, the risk of delinquencies and defaults has risen. Companies cannot just borrow their way to prosperity. But this is not what we are seeing in the markets. There, pricing is based on a 3% default rate, while the consensus of the big three rating agencies is 9%. Something is out of whack here.

That said, investors should take a differentiated view of the corporate bond market: some issuers are at greater risk, but there are also sectors and companies that have not borrowed excessively. Those are the issuers we prefer.

Where
do you see value in fixed income?

I believe risk premia for Italian, Greek,
Portuguese and Spanish government bonds versus core eurozone bonds can fall
further. These ‘peripheral’ eurozone countries stand to benefit the most from
the support measures by the EU, the European Central Bank (ECB) and even the US
Federal Reserve. There is support now in the form of the EU recovery fund and
ongoing support from the ECB through its bond-buying programme.

There is also still some reasonable
risk/reward potential in the higher-rated investment-grade segment.

As for emerging market debt, this has suffered significantly in the downturn, causing risk premiums to widen in an initial move. These spreads have now come down a long way, back to pre-crisis levels, but there are some troubling phenomena: the US-China tensions, uncertainty over the US presidential election outcome, oil price volatility and of course COVID-19.

All these risks could be weighing on the rally in emerging market debt. So we are approaching this segment from a market-neutral position and we are looking for value in long/short trades.

In local currency emerging market debt, we see room for incremental gains, for example, because we expect further US dollar weakness, but this segment should also benefit from (the scope for) central bank policy easing and from demand from investors looking for alternatives to the negative yield on developed market debt.

One example would be Argentina, which has come up with a bondholder-friendly debt-restructuring plan, which give its bonds some upside potential.

Overall, though, I would say that you
have to be a bond picker in the current market and look for issuers and sectors
where there is value rather than taking on market risk.

Some
emerging markets offer less security than the majority of international
developed markets. For this reason, services for portfolio transactions,
liquidation and conservation on behalf of funds invested in emerging markets
may carry greater risk.