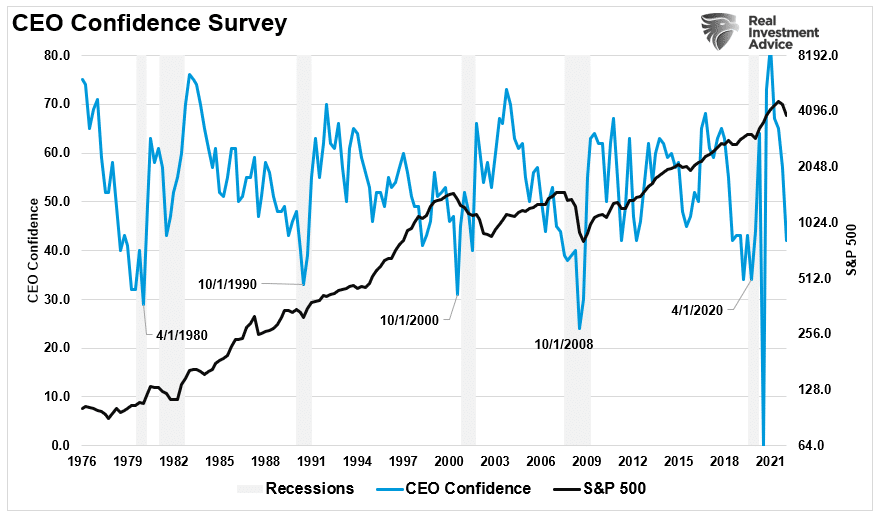 “I said there were storm clouds. But I’m going to change it. It’s a hurricane. Right now it’s kind of sunny, things are doing fine, and everyone thinks the Fed can handle it. That hurricane is right out there down the road coming our way. We don’t know if it’s a minor one or Superstorm Sandy. You better brace yourself.”

An unedited article (source) by Lance Roberts of realinvestmentadvice.com

Of course, he isn’t the only CEO feeling this way. The most recent CEO Confidence Index suggests that most leaders are concerned about the economy over the next few quarters.

Adding to that, the NFIB Small Business Survey also suggests that the economic backdrop is deteriorating rapidly. The chart below shows the number of firms expecting an economic improvement over the next 6-months. That number plunged to the lowest reading ever.

Of course, businesses are gloomy because consumer confidence, which is where they derive their revenue and profits, suggests dismal growth ahead. Our consumer confidence composite index (UofM and Conference Board measures) of expectations less current conditions is already at levels associated with previous bear markets and corrections.

So, is Jamie Dimon being hyperbolic, or is there a genuine concern for an economic hurricane?

The Storm Clouds Are Closer Than They Appear

Dimon’s two primary concerns about the economy are valid – the risk of a Fed policy mistake and the war between Russia and Ukraine. I am personally concerned about the first risk more than the second.

An honest review of history shows the Fed is consistently a “day late and a dollar short” regarding monetary policy. The history of “financial accidents” due to the Fed’s monetary intervention schemes is evident. Not just over the last decade, but since the Fed became “active” in 1980.

What should be evident is that before the Fed became active, economic growth was accelerating. There were few crisis events, and economic prosperity was broad. However, post-1980, the trend of economic growth declined. There are many reasons leading up to each event. However, the common denominator is the Fed tightening monetary policy.

Such is where I agree with Dimon considering his comments on monetary policy.

“We’ve never had QT like this, so you’re looking at something you could be writing history books on for 50 years,”

When the Fed reduced its balance sheet in 2018, it ran at a pace of $30 billion monthly with very low inflation. Starting this month, the Fed will be ramping up that reduction to 3-times the previous run rate, with inflation at nearly 9%.

While they believe they can achieve this reduction without disrupting the equity markets or causing an economic contraction, history suggests otherwise.

The Russia/Ukraine conflict, rising interest rates, and soaring commodity costs exacerbate the collapse in confidence. Such has already significantly tightened monetary policy, elevating the risk that the Fed will again make a “policy mistake.“

Preparing For An Economic Hurricane

From our perspective, I had often disagreed with Mr. Dimon’s outlooks, like in December 2019 when he stated:

That statement didn’t age well. Just 3-months later, the economy plunged into the deepest recession since the “Great Depression.”

However, this time I don’t. The risk of an “economic hurricane” is certainly elevated. But as someone who grew up on the Gulf Coast, Hurricanes can be unpredictable. More than once, my Dad and I boarded up windows and stocked up on non-perishable food and water, only to see the storm change course at the last minute. However, the preparation, while wasted, was better than the alternative.

Between soaring inflation, falling wages, slowing economic growth, and a Fed bent on tightening monetary policy, there is a storm on the horizon. The magnitude, timing, and location of the “economic hurricane” are still anyone’s best guess.

All we can do is prepare for the storm and then cross our fingers and hope for the best. The guidelines are simplistic but ultimately effective.

If the hurricane hits, preparing for the storm in advance will allow you to survive the impact. It is a relatively straightforward process to reallocate funds to equity risk if it doesn’t.

Given the numerous shocks to the system happening concurrently, I think investors will need more than just an umbrella to survive it.