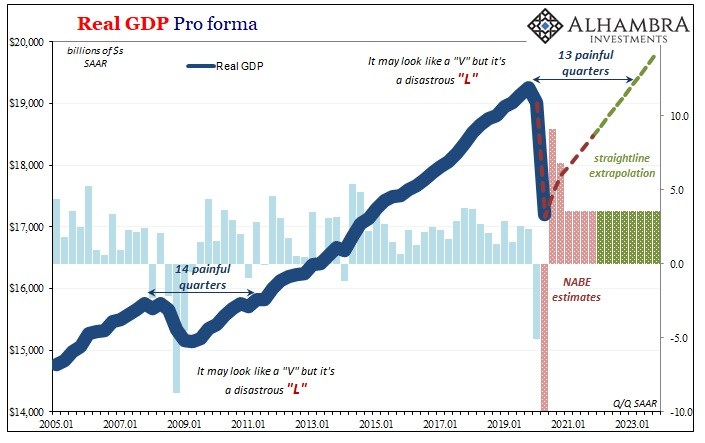 With all these warning signs pointing squarely back to the middle or end of July, it’s pretty clear that “something” changed the momentum maybe even direction of the economy’s reopening rebound. There’s also no question about what one key part of what might have been responsible, thus the quotation marks surrounding the word “something.”

The federal government had been handing out $600 per week bonuses to the unemployed as well as pretty much anyone willing to lie. As with most government handouts, next year it is extremely likely there’ll be relatively more focus and attention on how widespread the fraud had been than the pandemic itself.

The justification for such a lax approach is an easy one to identify ahead of such future scrutiny – the economy, workers in particular, just needed aid. Given such dire conditions, no one really cared who got what; just so long as a lot of people got a lot.

Some will always call it “stimulus” but it never works out that way even under less stressful (deflationary) situations. Either way, the big weekly bonus expired…at the end of July.

It was replaced on August 1 by another temporary aid (not stimulus) program but at half the weekly benefit ($300). And while it’s estimated this other unemployment lifeline run by the Federal Emergency Management Agency (yeah, FEMA’s doling out this cash!) will itself run out right around, well, now, in the larger picture the message is the same.

For all their numerous faults and self-inflicted blind spots, Economists at least understand the permanent income hypothesis. If you’re expecting “stimulus” from what recipients already know is temporary aid, prepare to be disappointed beyond the very short run.

We’ve seen the data stumble of late and not just in the US. While American workers, former workers, mostly, are living through another harsh example of how government really works in economics (small “e”), reality seems to be setting in here as well as globally. Beyond the initial reopening rush and euphoria, then what?

Reopening by itself was never going to be enough to lift the economy into real recovery; even Economists knew that, thus all the mainstream models that aren’t actually “V’s”, forecasting instead how in the most optimistic of cases we’ll all be lucky to get back to even sometime before 2023.

In the US, we have another example now in hand today. The Census Bureau reports a pretty substantial stumble in retail sales. After two months of managing mildly recessionary growth rates just above 3% (year-over-year), in August 2020 retail sales (unadjusted) were basically unchanged from August 2019.

Excluding auto sales, the total was slightly negative last month – four months into the reopening rebound. (It has to be noted that auto sales in the retail sales series continue to be in a different world than the data on auto sales tabulated by the BEA.) We’ve yet to see a “V-like” +10% or better in any month, but already another zero maybe even small minus?

“Something” is missing here. 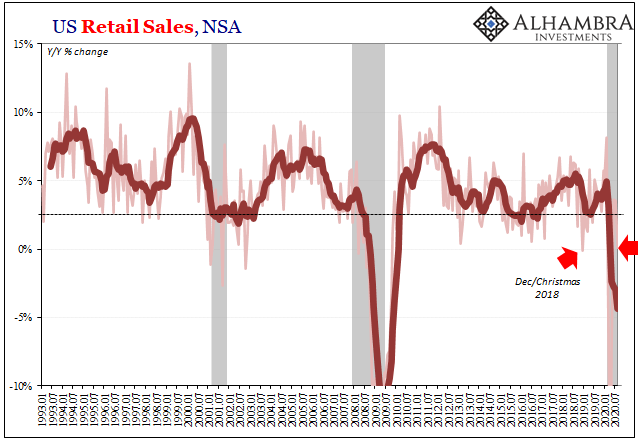 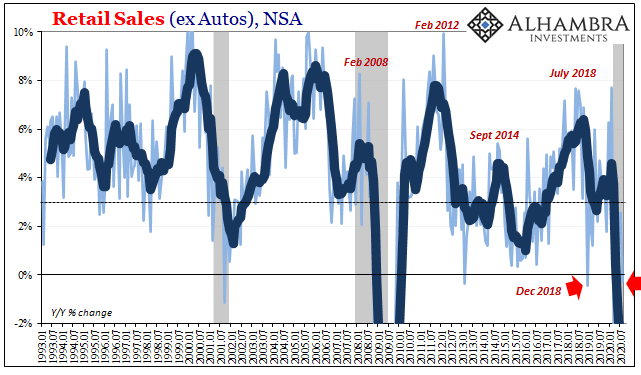 To put this into perspective, these growth rates are equivalent to those posted for December 2018 – the Christmas shopping debacle during the landmine which would go on to punctuate and put an exclamation point on the US economy synchronizing with the rest of the world in a serious downturn. A downswing that would eventually verge on the edge of recession (manufacturing and industry already experiencing one) even before COVID.

That kind of result would be alarming in any month – just as it had been when it was first reported (though since revised) back in January 2019. If the economy actually stumbled that bad to end 2018, Jay Powell’s inflationary scenario and the rate hikes which were demanded by it had zero chance in 2019; just as the bond market had been saying.

So, what does a similar result tell us about the middle of summer 2020? This is not going well. When you look at it plotted in its seasonally-adjusted format, retail sales like PMI’s make it appear as if things have returned to normal. It’s all an illusion predicated on ignoring the decline which preceded all this. 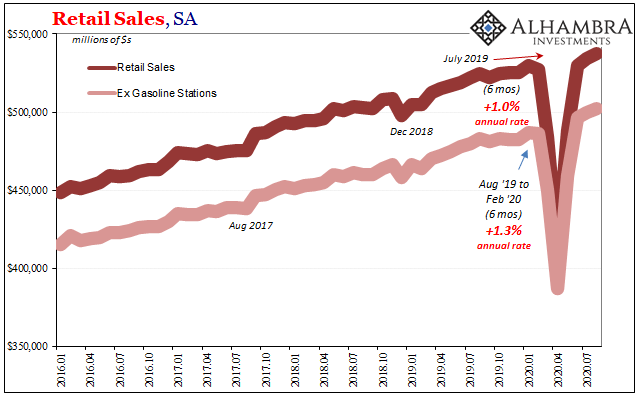 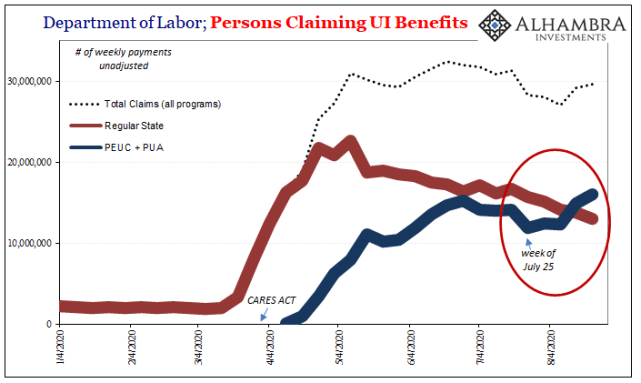 There is nothing normal about the chart above and unless August’s disappointment proves to be statistical noise or a one-month real economy aberration, this spells trouble because it is entirely too consistent with other data starting to indicate, and markets starting to price, the growing probability that rebound momentum alone was all there had ever been to it. Gigantic as some of those positive numbers have been, they were just positive numbers.

Worse, much of that, especially in the US, might have further been attributable to temporary government aid programs. The private real economy doesn’t seem to be in any shape to pick up this growing slack, to meaningfully transition reopening any further toward meaningful recovery beyond positive numbers.

On the one hand, you could take that to mean something hopeful – at some point, likely the very next day after the November elections, the government’s probably going to do something about it. On the other hand, in November, six months after this upturn began, the government probably will still need to do something substantial about this.  Aid, not stimulus.

And that includes the Federal Reserve and its increasingly ridiculous quest to convince you, me, and everyone else that average inflation targeting isn’t symmetrical inflation targets which wasn’t forward guidance. If this plus temporary unemployment aid is what the economy really has had in its plus column, no wonder mid-July and no wonder the reopening rebound is proving to be, dare I write, “transitory.”