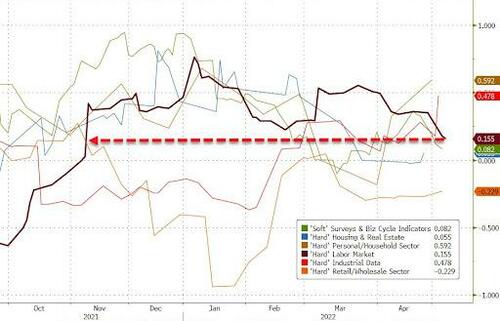 April Payrolls Preview: Get Ready For A Big Miss

With the Fed unleashing the most aggressive tightening campaign in decades just days after US GDP unexpectedly printed negative – a technical recession just one more subzero quarter away – and both the US stock and housing market careening in scary reruns of the 1970s, the only pillar of strength the US has left is the overheating labor market. But, as we noted earlier today, even that is starting to crack.

Which is why tomorrow’s April payrolls will be closely scrutinized, not just whether there is an unexpectedly poor jobs print further confirming that the US is on the verge of recession, but also for information on whether red-hot wage growth – a byproduct of the runaway wage-price spiral –  is finally cooling, and hinting at peak inflation.

So here’s what Wall Street expects tomorrow, courtesy of Newsquawk:

The consensus expects 391k non-farm payrolls to be added in April, with the pace easing from recent averages as well as the prior rate. The breakdown of expectations by bank is as follows:

It is likely that traders will place a great deal of emphasis on the average hourly earnings metrics given that the Fed is more focused on the inflation part of its mandate. Proxies of labor market progress have been mixed in the month: the ADP’s gauge of payrolls disappointed expectations and was below the analyst forecast range; although initial jobless claims inched up slightly comparing the reference periods for the March and April jobs reports, the four-week moving average has fallen, as have continuing claims; within the two ISM reports on business, the employment sub-indices both fell in the month, with the services sector down beneath the 50.0 neutral level. Meanwhile, other reports continue to note the tightness within labor markets, and there are some data points–like the Employment Costs Index–which continue to allude to strongly rising wages as consumer prices continue to rise.

PROXIES: The ADP’s gauge of private payrolls was soft relative to expectations, printing 247k against an expected 395k–below the 300-585k forecast range–although the March data saw an upward revision to 479k from 455k. Analysts at Pantheon Macroeconomics were dismissive about the relevance of the data, noting that it is just a model-driven forecast with a “patchy record”. The consultancy says that the “ADP talks about how it incorporates data from firms which use their payroll processing services, but that’s not the core of their model, which also includes regular macro data and the lagged official payroll numbers,” adding that its estimate “is not statistically significant when incorporated into a payroll model using the Homebase numbers, so we aren’t changing our 300K forecast for Friday’s official headline reading.” Elsewhere, the weekly data that coincides with the typical reference period for the establishment survey showed initial jobless claims rising to 185k from 177k heading into the March jobs report, although the four-week average slipped to 177.5k from 188.75k; continuing claims eased to 1.408mln from 1.542mln, with the four-week average also falling.

BUSINESS SURVEYS: Within the ISM manufacturing survey, the Employment sub-component fell by 5.4 points to 50.9, a shade above the 50.0 neutral level, indicating that labour market momentum in the manufacturing sector was slowing. (NOTE: ISM says that an employment index above 50.5, over time, is generally consistent with an increase in the BLS data on manufacturing employment). The report noted that panellists were still struggling to meet labour management plans, with fewer signs of improvement compared to March. ISM said that there was a smaller share of comments noting greater hiring ease in the month, while an overwhelming majority of panellists were again indicating that their companies were hiring. That said, 34% of those surveyed expressed difficulty in filling positions, which was higher than the 28% in March; turnover rates remained elevated, and there were fewer indications of hiring improvement. The ISM said employment levels, driven primarily by turnover and a smaller labour pool, remained the top issue affecting further output growth. The Services ISM, meanwhile, saw its employment sub-index decline by 4.5 points, taking it to 49.5 – below the 50.0 neutral mark. The survey noted that comments from respondents included “job openings exist, but finding talent to fill them remains a struggle across most industry sectors and job categories” and “demand for employment remains hypercompetitive; there is just not enough qualified personnel available.”

WAGES: The street expects average hourly earnings to rise by 0.4% M/M in April, although the annual measure is seen slipping by one-tenth of a percentage point to 5.5% Y/Y. Much of the market’s focus will be on these wage components, particularly after the Q1 employment cost index (ECI) rose by 1.4%, topping the consensus 1.1%; on an annualized basis; the ECI was up 5.2% Y/Y. Analysts have been paying more attention to the ECI data after Fed Chair Powell last November cited it as a measure that he was monitoring closely when gauging how employment compensation was faring. Analysts generally agree that the trends seen in this report suggest the labour market is tight and consistent with the need for the FOMC to front-load rate hikes to put a lid on price pressures. UBS says that a composition-adjusted average hourly earnings measure that it constructed has recently been running at a little below 4%, which is a bit below the pace of annualised gains seen in the ECI data. The bank is expecting that the April AHE data will likely surprise to the upside, however, this would be due to calendar shifts, and should not be taken as a strong economic signal.

ARGUING FOR A WEAKNER THAN EXPECTED REPORT:

ARGUING FOR A STRONGER-THAN-EXPECTED REPORT:

The take home message is simple: bulls should pray for a huge miss, the bigger the better, because between negative GDP and a big hit to the “overheating labor market” stories, the Fed’s aggressive hiking and QT will last at most a few months, before it is followed by its logical successor: ZIRP (or NIRP) and QE, both of which will sent stocks, gold and cryptos to new all time highs.