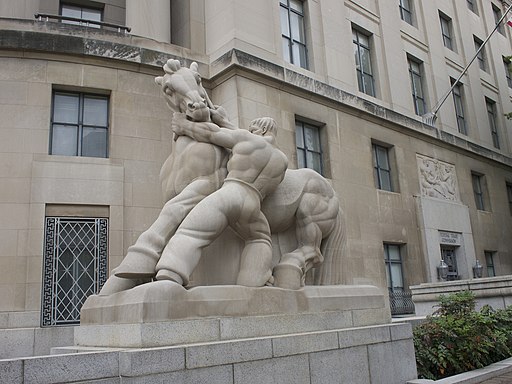 “…the man‐and‐horse statue outside the FTC, which signifies the government’s heroic battle to strangle trade. ”

Link from Chris Edwards proposed museum of government failures. (The actual title, “Man controlling trade,” is almost as good in an unintentional, new-Deal start of way, but I like Chris’ better. )

I was chatting with Chris and nominated the California high speed railway, which will soon be a massive Christo-scale installation, dedicated to the same cause. Imagine arching viaducts looming over the freeways, connected to nothing, like the ruins of Roman aqueducts, but unlike those never used. Like this one.

All it needs is a great set of plaques, installed by the new Libertarian governor of the state of Jefferson after secession, and title. “Ruins of the progressive state?” The Pont du Gard it’s not, but perhaps the brutalist functionality is better for my artistic purpose.

(Yes, California really has built expensive overpasses and viaducts before building the roadbed to which they connect, which it will likely never build.

Question of the day: If California is going to ban internal combustion cars and trucks, just what is the point of the train? It must now be a net carbon producer.)