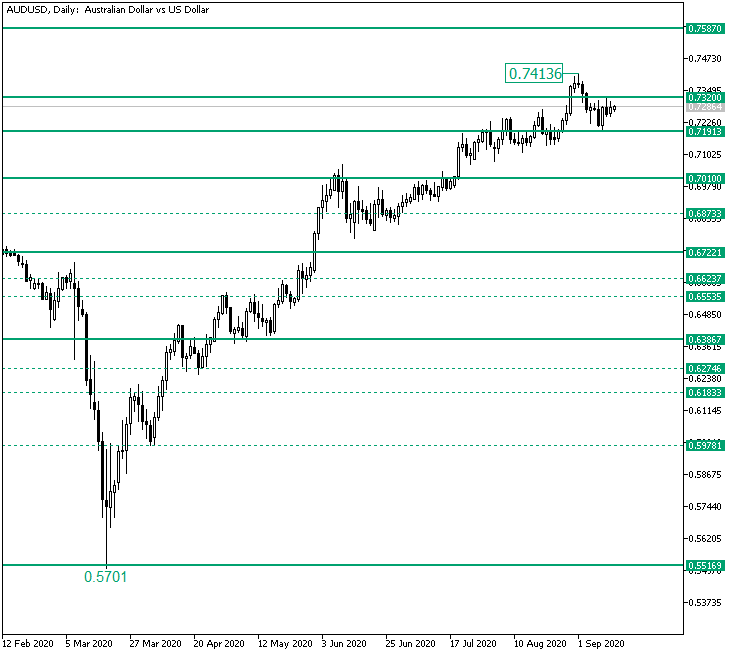 The Australian versus the US dollar currency pair seems to be bounded by 0.7191 and 0.7320. Did the bulls lose their strength?

The appreciation from the 0.5701 low, and which extended until the 0.7436 high, conquered many levels along its way.

However, the firm 0.7320 resistance area appears to be a challenge for the bulls that, until now, got used with relatively easy victories.

Even more, the fact that the 0.7413 high is formed above 0.7320 resistance and, later on, dropped back under it, makes the bears confident in their belief that all was nothing but a false break.

However, as long as the ascending trend is in place, the bears just might be getting a little ahead of themselves.

Also, the bullish engulfing printed on September 9 points to the willingness of the bulls to continue their march towards higher prices.

As the bulls attempted a recovery, they were pushed even further, under the firm 0.7236 level, thus printing the 0.7192 low.

Nevertheless, the bulls then quickly improved, bringing the price back to the 0.7294 level. In the process, an inverted head and shoulders was defined, with 0.7294 acting as the .

In the  plays its role, and offers support, then the 0.7400 psychological level — not highlighted in the chart — is the next target.

On the other hand, if 0.7236 becomes resistance, then the chart pattern will be invalidated, and the bears would have an open path to 0.7170.